The Mysterious Dance of the Horns

Abbots Bromley is a small, old village in the heart of Staffordshire, England. It has become renowned for its annual "Horn Dance." For those who may not know, the dance is a near-magical event held every year on what is termed "Wakes Monday," which follows the first Sunday - or "Wakes Sunday" - after September 4. The full and unexpurgated facts pertaining to the Horn Dance and its ancient origins have been somewhat obscured by the passage of time. However, of several things we can be sure.

The "horns" that are used in the dance are, in reality, reindeer antlers; a tradition that date back to at least the 11th Century. And Wakes Monday aside, the horns can be found on continuous display in the village's St. Nicholas' Church. At 8:00 a.m. on each and every Wakes Monday, a group brings the centuries-old tradition to life in engaging style. They include six whose job it is to hold the horns aloft throughout the dance, along with a musician, a fool/jester, a young boy equipped with a bow and arrow, a Maid Marian, and a Hobby Horse. 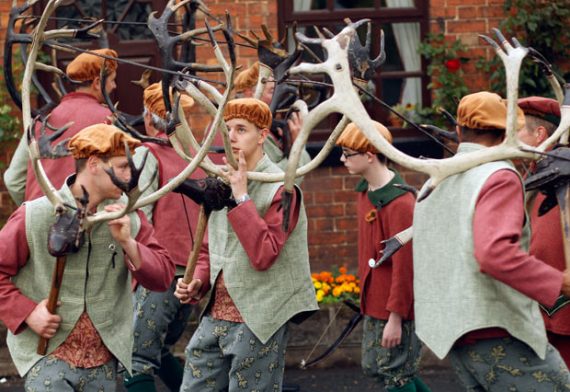 They commence upon their somewhat mystical parade through the streets of the village, to a specific location where the dance duly kicks off in fine style. Music is supplied by a Melodeon player, while the Hobby Horse beats a careful and rhythmic time with constantly snapping jaws. The high point of the dance occurs when the "deer men" - as they are known - face each other, and with horns duly lowered, proceed to act out a mock form of combat.

Much merriment and celebration inevitably follows, with the dancers and the ensuing throng of villagers and visitors making their way to various inns and houses. It all continues into the evening, and is ultimately brought to a resounding close at around 8:00 p.m., with what is known as the Service of Compline. In other words, a very good time - and one that harks right back into the fog-shrouded heart of British folklore and history - is had by one and all.

It must be said that while the Horn Dance is without doubt the major event of the year for the village folk of Abbots Bromley, the precise origins of the centuries-old ceremony are still somewhat obscure, vague, and open to interpretation and debate. Some students of the Dance are firmly convinced that it was put into place to commemorate the assigning of hunting rights to the people of Abbots Bromley in centuries long past. Meanwhile, others see the Horn Dance as possibly being a relic celebration that honors the granting, in 1226, by Henry II, of the three-day-long Berthelemy Fair.

Another theory suggests the possibility of even older origins for the Horn Dance. As in way older. According to some, the Horn Dance may even represent one of the very last surviving rituals that celebrate Britain's long gone, mysterious past. For example, the "shooting" of the bow at the "deer men" is perceived in some quarters as being an act that has its origins fixed firmly within the world of ritual magic, when ancient man used both wild dance and ancient sorcery in a swirling and heady concoction designed to ensure a successful hunt for food.

Whatever the ultimate truth of the old and odd affair, I can state for sure - having lived, as a child, just a short car journey from Abbots Bromley - that to personally attend the village's Horn Dance is to take an instant step back in time, into England's past, when myth, magic and folklore were all-dominating and all-important. Certainly for the people of Abbots Bromley, that importance still remains and is not going away anytime soon.