For as long as there have been people looking toward the evening skies, reports of anomalous illuminations have been recounted. Varieties include those caused by such things as meteors and auroras, to brilliant, colorful flashes of electricity known today as "sprites" that, interestingly, were reported by pilots as far back as WWII, and dismissed due to a perceived lack of credibility.

Today, it still seems that a lack of data pertaining to any given phenomenon may elicit similar responses from the science-minded among us, especially in response to any retelling of aerial activities perceived as being anomalous in nature.

To illustrate this through personal experience, I received an email from a friend of mine in the UK recently who told me about observing a "green flash" at sunset:

Micah, the other night I witnessed a 'green flash sunset' here in North Eastern England. It was awesome! Did you ever see one?

As I read over my friend's description, I perceived this as having been a description of a green flash of light he observed at around the time of sunset (which, as we will see in a moment, hadn't been at all what he was describing). I could recall on a few occasions years ago having observed something similar: a sudden, and very brilliant, green "flash" which briefly appeared to illuminate the entire sky in all directions well after dark.

Looking into the possible causes, this seemed to me most likely to be a meteor burning its way through our atmosphere. With a moderate cloud cover to obscure the object itself, any sudden burst of light produced by the burning space rock would illuminate the moisture in the atmosphere, resulting in an almost lightning-like flash across the visible sky. Meteorological data seems to support the idea that upper atmospheric storms might result in similar flashes as well, in which case thunder may not accompany the mystery flashes.

Discussing this on an episode of my Gralien Report Podcast, I noted my own experiences and wondered if that had been the phenomenon my friend in Northern England had observed. However, my listeners were quick to chime in, and note that a "green flash sunset" is actually a very specific, and equally explicable phenomenon.

"The green flash is real," another listener wrote. "I have never seen it myself, though I have tried to see it on those rare occasional when I can see the ocean horizon." He linked me to the Wikipedia page on the subject, which does feature a number of excellent photos which clearly shows, as the name implies, a "green flash" appearing just over the horizon as the sun sets over the ocean.

The phenomenon occurs as a result of atmospheric layers above the Earth acting like a prism, refracting light in such a way that specific color bands become visible under the right conditions. A similar photo, featured by NASA along with its Picture of the Day back in March 2004, gave an apt description of the phenomenon, and how its relative obscurity has led to skepticism about its existence:

Many think it is just a myth. Others think it is true but its cause isn't known. Adventurers pride themselves on having seen it. It's a green flash from the Sun. The truth is the green flash does exist and its cause is well understood. Just as the setting Sun disappears completely from view, a last glimmer appears startlingly green. The effect is typically visible only from locations with a low, distant horizon, and lasts just a few seconds. A green flash is also visible for a rising Sun, but takes better timing to spot. A dramatic green flash was caught in the above photograph in 1992 from Finland. The Sun itself does not turn partly green, the effect is caused by layers of the Earth's atmosphere acting like a prism. 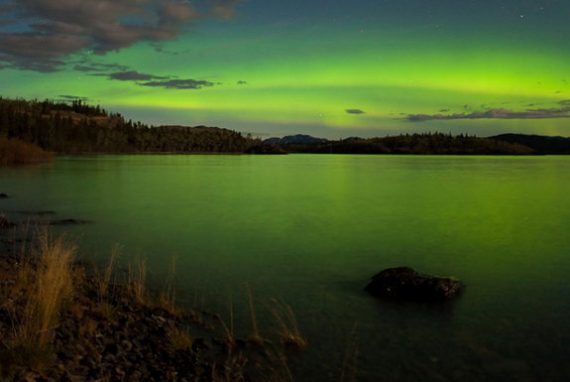 If we take time to think about this, there may be any number of similarly well understood, but little publicized natural phenomena, that people in their excitement may report, only to be called cranks, weirdos, or even liars. When in fact, if we take the time to consider possible solutions to observations of anomalous aerial phenomenon of the natural variety, we might actually find that people aren't losing their minds... they're actually submitting valid reports of mysterious illuminations they've witnessed.

I often try to take a moment to tie this in with UFO literature, in a sense, because it seems that there are any numbers of things that might be observed in our skies that constitute UFO reports. And no, that's not to say that people are just seeing clouds, sprites, "green flashes", meteors, or any other natural phenomenon we've covered within the brief scope of this article. While some UFO reports certainly could be a few of these things, it seems that there certainly are other instances where the objects observed appear to have been large, intelligently controlled aircraft, such as reports collected during the late 1980s and early 1990s in Belgium, as well as a rash of reports over Illinois in 2000 for which a report of the incident, according to this site, has been accessed by nearly two dozen government agencies. There was also a famous incident where a large object buzzed U.S. President George W. Bush's Texas ranch; if verified, one would have to think such an incident would constitute a certain national security concern in the United States among intelligence agencies.

But the broader point to address here is that, if we're too quick to dismiss what someone says they have observed, at times we may be setting ourselves up for overlooking information that may be both useful, in addition to offering an entirely explicable approach to examining certain aerial phenomenon.

The Strange Saga of a Secret Aircraft