The Mysterious Monster of the Mere

My previous article - "There's 'Something' in the Water" - was focused on recent sightings of a large, unidentified fish seen in the River Nene, Cambridgeshire, England. Speculation concerning the nature of the beast has ranged from a giant eel to a sturgeon. As I also noted in the article, the theory that the creature might be a large catfish has been suggested, too. On the matter of the catfish theory, I made a brief mention of an expedition undertaken in 2002 by the UK's Center for Fortean Zoology. It took the CFZ to Martin Mere, Lancashire, a body of water in the north of England.

As I also noted in the article, the CFZ's director, Jon Downes, wrote a full-length book on the affair of Martin Mere. It's very appropriate title is Monster of the Mere. Jon's book is a highly entertaining one. It comes across like a combination of a Hardy Boys adventure, Fear and Loathing in Las Vegas, and Animal Planet's River Monsters show. So, I figured that since I mentioned Jon's book, why not share with you the background to the story that led the CFZ to seek out and solve the mystery? 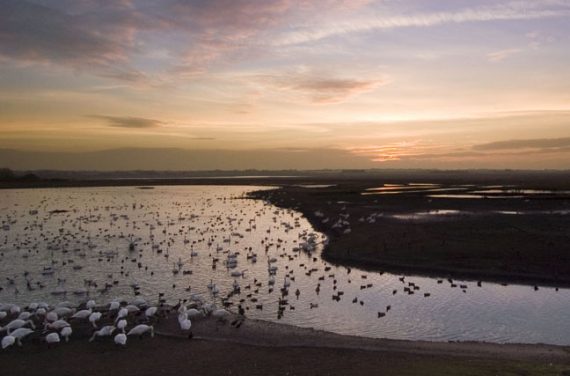 It all began on Valentine’s Day, 2002, when a Lancashire, England newspaper announced that “something” had been attacking swans at a picturesque, otherwise tranquil, nature reserve in the north of England. Eyewitnesses reported that a giant, unknown creature was dragging fully grown swans beneath the water – and which were never seen again. The location was the Wildfowl and Welland’s Trust Reserve at Martin Mere, Ormskirk, Lancashire. And, when the media reported that the beast was “the size of a small car,” things really took off, in the publicity stakes.

Pat Wisniewski, the reserve’s manager, said that: “Whatever it was out there must have been pretty big to pull a swan back into the water. Swans weigh up to thirteen kilos. This could be an extremely large pike or a Wels catfish.” Wisniewski had good reason to take the matter seriously. Four years previously, in 1998, he had spotted something large and dark circling in the mere – much to his consternation and concern.

It didn’t take long before a team of intrepid investigators from Britain’s premier monster-hunting group, the Center for Fortean Zoology, headed north from their home-base in the south of England. It was an ambitious project, led by Jon Downes, and with back-up provided by Richard Freeman, a former head-keeper at England’s Twycross Zoo, and Graham Inglis.

In no time at all, the story went from one of a mystery fish to a tale involving “dragons,” “unexplained ancient human mutilation,” and even “a resident mermaid.” Of course, much of this was due to media hype and sensationalism, but people were clearly seeing something out of the ordinary. The CFZ was determined to know exactly what it was. Freeman, Downes and Inglis undertook numerous interviews with local folk who had seen the beast. They were pretty much unanimous that it was a powerful, fast-swimming creature of large proportions.

It was thanks to Freeman’s dedication that, in July 2002, he finally caught sight of the monster-fish. Although it was only in view for mere moments, Freeman was pretty sure that what he encountered in the dark waters was a Wels catfish. But, this was no ordinary Wels. It was huge. In all likelihood, said Freeman, it was very old indeed.

Freeman opined that it had probably managed to successfully avoid one and all for decades, happily living on the local fish and bird population. And, of course, who would believe it if someone occasionally reported seeing a monster-fish in Martin Mere? Probably no-one until – for reasons unknown – the great beast made its presence known more and more in the summer of 2002.

Sightings have subsided in recent years, leading to the possibility that the immense creature has died, or perhaps more likely, has retreated to the lower, muddy depths of the mere to avoid detection and media attention. Keep that latter possibility in mind should you ever visit Martin Mere and decide to go for a paddle. You may do so at your cost – and possibly even at the expense of a few toes!

There’s “Something” in the River