The Mystery of the White Shark Café

The oceans of the world are home to all manner of dangerous and frightening creatures. This kill or be killed ecosystem has given rise to fanged beasts, stinging killers, and a menagerie of all manner of toothed, spiked, spined, and poisonous organisms of all shapes and sizes. Yet of all these the most feared, respected, and indeed misunderstood remains the majestic, terrifying, and oddly beautiful great white shark. Now for most people one of these huge, deadly fish is scary enough, but imagine hundreds of them coming together in a mass of fins and serrated teeth, a congregation of stealthy death straight out of our nightmares. Far out in the Pacific Ocean one such place exists. It is a place to which these ferocious sharks are inexorably drawn in vast numbers, which perhaps even more frighteningly is for reasons that scientists have not even begun to comprehend.

The great white shark (Carcharodon carcharias), also known variously as the great white, white pointer, white shark, or white death, is a large shark that can reach lengths of over 20 feet and weigh 3 tons, and is the only known surviving member of the genus Carcharodon. They are found in cool coastal waters around the world and through movies and their fierce appearance have developed an image as silent, merciless underwater killers. One habitat of great white sharks is off the coast of Central California and its offshore islands, a population that is most probably genetically distinct, which preys mostly on marine mammals such as seals or sea lions, the occasional fish or sea bird, and are not above the occasional surfer as well. With its enormous bulk, beady black eyes, gaping maws, formidable jagged teeth, and its reputation as a man-eater, the great white is one of the most highly feared creatures in the ocean, its very presence enough to make some people shun going into the water altogether. 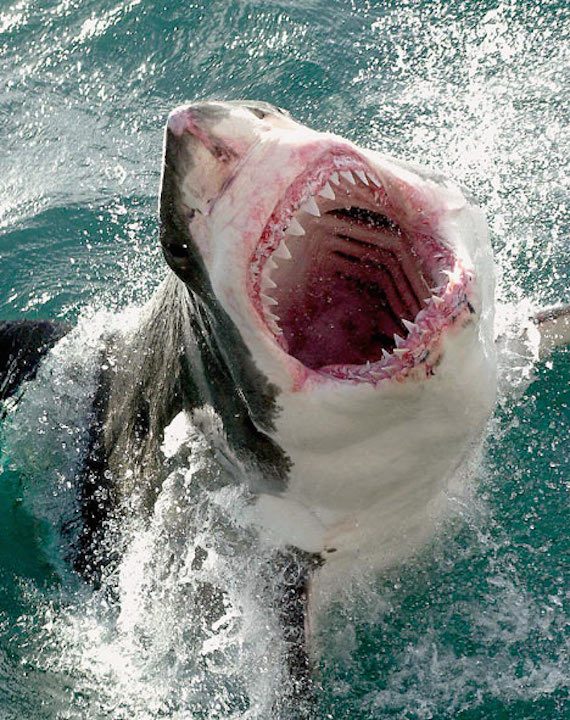 For such a large and notorious creature, the great white shark is still largely an enigma. The sharks are famously elusive and unpredictable, making studying them and gleaning some understanding of what makes them tick a tricky business. Very little is known of these sharks’ habits, and their movements were long considered to be a total mystery. It has only been in the past decade that mobile shark cages and satellite-enabled tracking devices have really been able to shed some light on where these magnificent predators go, how deep they dive, their migration patterns, and feeding habits. It was known that they spent half of the year in their feeding grounds close to shore, but it had long been a complete mystery as to where the sharks went for the rest of the year. The only thing that was really known for sure was that the sharks could migrate over mind bogglingly vast distances, with one individual shark, affectionately named Nicole, once tracked from South Africa to Australia and back, a total distance of an incredible 12,400 miles.

What is known now thanks to tracking studies conducted by researchers from Stanford, UC Davis, and the Point Reyes Bird Observatory and the Pelagic Shark Research Foundation, the great white sharks of California spend about half of the year, from August to February, prowling waters close to shore off the Farallon Islands, Año Nuevo Island and various points off Central California, including occasional and undoubtedly unsettling forays into San Francisco Bay, all of which comprises a region rather ominously referred to as The Red Triangle. The sharks like it here because there is abundant prey, such as sea lions, harbor seals, and elephant seals, as well as plentiful fish and sea otters in these waters, which the solitary predators devour with relish. Starting in around December, the number of sharks in the area begins to dwindle as they begin to head out of the area to new feeding grounds. Data showed that about 20% of the sharks made their way to the Hawaiian Islands, and although great whites are typically solitary loners, they all followed approximately the same route and exhibited a very well-defined migratory pattern. Once in Hawaii, it is suspected that they feed on humpback whales or their placentas. Yet although the tracking data gave researchers a lot of answers and insight into great white behavior, it also opened the door to an enduring and perplexing mystery which has been yet to be solved. 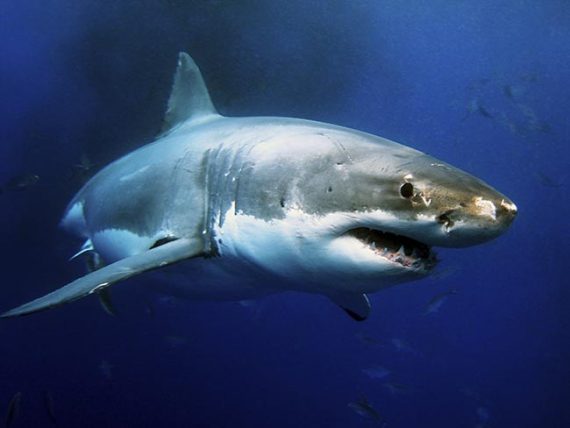 The tracking studies showed that while 20% of the Californian great whites headed to Hawaii to feed and generally freak people out, a large portion of the sharks opted to consistently congregate at a well-defined, secluded, remote patch of ocean in the middle of the Pacific, located about halfway between the Baja Peninsula and the Hawaiian Island in order to… well, no one really knows. There are several things that make this behavior strange. For one, the area where the sharks are gathering is seemingly just a random spot in the middle of nowhere. There is no indication or evidence of any particular reason why so many sharks should all want to come to this one specific area, and it was never considered as a shark habitat previously. It isn’t even particularly understood how the sharks even find this place time and time again considering there seems to be nothing remarkable about the area at all. There is also the fact that the spot where all of these great whites are gathering is basically a barren wasteland, the ocean’s equivalent of a desert. It is not a productive feeding ground, with no virtually no prey here to attract the large sharks, making it all the more bizarre that they should find this place so alluring. Even stranger still is that they will opt to linger in this barren area for months on end even without any discernible prey before heading back to California to where all the seals are. Despite no one having the slightest idea of why so many great whites come here, they continue to do it year after year, and the area was coined the “White Shark Café” by researchers from the Monterey Bay Aquarium Research Institute in 2002.

There are other odd features of the White Shark Café concerning the behavior of the sharks that come here as well. While great white sharks are usually solitary hunters that rarely fraternize with their own kind and generally avoid each other, they come to this mysterious area in great numbers and in close proximity as they languish about apparently doing nothing. It is practically unheard of for so many great white sharks to come into such close proximity, in such concentrations, for such long lengths of time, and researchers haven’t been able to figure out why. With so many of the ferocious predators cruising about out in the middle of nowhere, one can only imagine how terrifying a sight this must have been for whoever first laid eyes upon it. Another mysterious behavior exhibited by the sharks at the White Shark Café is all of the diving they seem to be doing during their journey here, as well as upon arrival. While great whites have been tracked to do some impressively deep dives on occasion, on the way to the White Shark Café the sharks were found to make truly epic dives, sometimes plunging as far as 3,000 feet or more down into the dark depths. Once they arrive at the White Shark Café they dive to depths of around 1,000 feet over and over again, approximately once every 10 minutes or 30 to 96 times per day, which is far more often and deeper than is typical. Again, no one knows why. 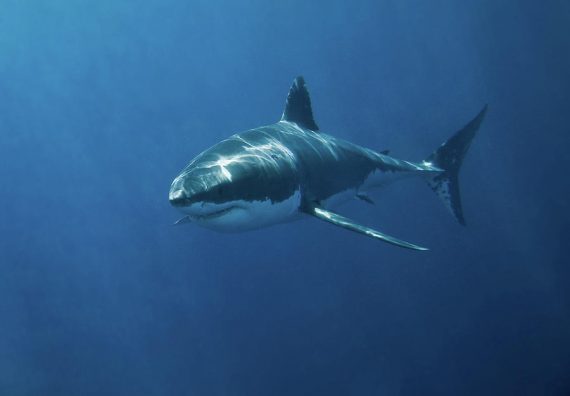 There are a few theories as to why the great white sharks come here to this remote and desolate stretch of water in such vast numbers. One idea is that they come here to mate, yet none of the sharks have been observed actually engaging in such behavior or giving birth, and the presence of juvenile sharks below breeding age here also seems to cast doubt on the idea. Another idea is that they are here to intercept some sort of mobile food source such as schools of tuna or billfish, yet these fish are typically too fast for the sharks to reliably catch. One of the more interesting theories is that the white sharks are not here to catch tuna, but rather something much larger and more mysterious; the giant squid. The constant deep dives the sharks make and the presence of sperm whales, known predators of giant squid, reported from the area from time to time seem to support this notion. Perhaps the White Shark Café is only an ocean desert at the surface, but holds some prime giant squid hunting grounds way down in the inky depths. Yet for all of the speculation and theorizing, it is still completely unknown as to what draws so many great white sharks here year after year, for what has probably been millennia.

Cracking the secret of why California’s great white sharks come to the White Shark Café is considered to be a very important step in learning about the behavior and movements of these elusive monsters, which face a serious threat of disappearing forever without us ever really having understood anything about them. This is especially true in light of the recent discovery in DNA studies performed at Stanford University that the great white shark population of the Northeast Pacific seems genetically distinct from other populations around the world, having descended from a small number of sharks from Australia and New Zealand around 200,000 years ago and proceeding to evolve in isolation. This new information suggests that the estimated 1,000 Californian great white sharks remaining could be the last of their kind, putting them in a very vulnerable position indeed. Learning more about the sharks' enigmatic behaviors, such as why they go to the White Shark Café, may shed more light on these misunderstood beasts and their role within the ecosystem as a top predator. For now, though, these reclusive beasts of our nightmares cruise through the depths on their own inscrutable missions, defying many of our attempts to understand them and posing more questions than answers, not the least of which is a remote, unremarkable patch of water to which droves of the toothy beasts cannot resist flocking to. 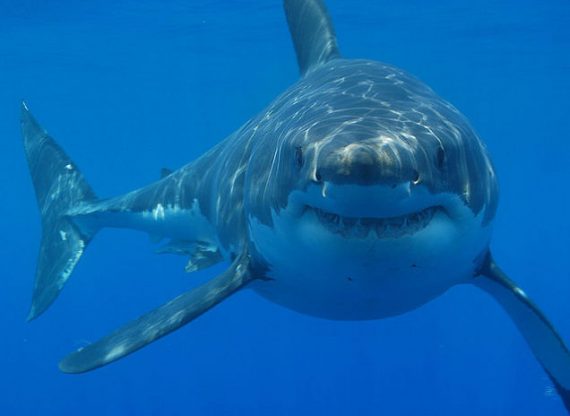 What does the White Shark Café mean to these sharks? Why do they come here in such large numbers? What are they seeking when they penetrate hundreds of feet down into the dark cold? Are these things that we will ever understand or just some of the many secrets the great white sharks will likely always keep to themselves as they have for millions of years? Whatever the answers may be, just remember that when you hear a report of a single great white terrorizing an area just remember that out there across the deep blue sea, out over the horizon past those churning waves, there is a place where hundreds of them lurk; circling, diving, their intent as murky as the depths to which they dive.

The Gravity of the Situation: Remote Viewing, Gravitons, and Black Holes