The Mystery of the Yellowstone Lake Whispers

All over the world there have been long been persistent reports of anomalous sounds emanating from the skies above our heads, the ground beneath our feet, and the dark depths of the world’s oceans. From the din of all of the cacophony of noises produced by mankind and nature, sometimes there are those aural oddities that burst forth from the realm of the unknown to roar out into our ears from some inscrutable source, leaving us puzzled, confused, and oftentimes not a little scared. One anomalous sound phenomenon that has long perplexed visitors and locals alike comes to us from one of the most visited natural tourist attractions in the United States, the expansive Yellowstone National Park. Here, among the stunning natural beauty occurs the regular emergence of strange, eerie, inexplicable sounds that originate in the area of Yellowstone Lake and nearby Shoshone Lake as well, which have become known as the Yellowstone Whispers.

Yellowstone National Park is a sprawling 3,468.4 square mile (8,983 km2) expanse of woodlands, grasslands, mountain ranges, lakes, rivers, and canyons located primarily within the state of Wyoming, but also extending into the states of Montana and Idaho. Established in 1872 and often lauded as the country’s first national park, Yellowstone has become one of the most popular national parks in North America, drawing in droves of visitors every year with its breathtaking natural vistas, ample recreational facilities, abundant wildlife including such megafauna as bears, wolves, bison, and elk, and unique geothermal features, including the famous Old Faithful Geyser. Within this vast wilderness lies Yellowstone Lake, which is situated over the highly volcanic Yellowstone Caldera and is one of the highest altitude lakes in North America. It is from here that stories of anomalous sounds echoing across the wilderness have long originated.

For centuries the Native people of the region spoke of the strange noises, considering them to be a sacred event, and early settlers and trappers in the area also reported them. The noises are mostly described as a sort of musical humming or whining that seemed to be emitted from the very air itself, although they have been variously described as sounding like metal cables crashing together, the swarming of bees, ethereal organ music, the strumming of a harp, or the sound of hundreds of birds flapping their wings in unison. Indeed, there are as many different interpretations of what the sounds sound like as people who have heard them. The odd sounds typically are heard on clear, windless days, often in winter, between the hours of dawn and 10AM and can last for up to 30 seconds. The sounds typically are usually described as building in volume and intensity until they became almost deafening, after which they would suddenly cease altogether. They are often reported as changing directions or seeming to travel rapidly across the sky, and are very often blamed for instilling a deep sense of unease or even dread in those who hear them.

The first written record of the mysterious noises of Yellowstone was made in 1872, the very same year of the park’s establishment, during the Hayden Expedition, which was tasked with surveying the park’s region. One member of the expedition, an F.H. Bradley, heard the sounds himself, seemingly emanating from the sky over the lake, and described them thus:

While getting breakfast, we heard every few moments a curious sound, between a whistle and a hoarse whine, whose locality and character we could not at first determine.

The mysterious sounds would further be written of in an account from 1892, when a biology professor, Edwin Linton, wrote of them while engaged in a U.S. Fish Commission project. Linton wrote:

It seemed to begin at a distance [and] grow louder overhead where it filled the upper air, and suggested a medley of wind in the tops of pine trees and in telegraph wires, the echo of bells after being repeated several times, the humming of a swarm of bees, and two or three other less definite sources of sound. It appeared to be a rather indefinite, reverberating sound, characterized by a slight metallic resonance.

After that, a Captain Hiram Martin Chittendon, of the Army Corps of Engineers wrote of the mysterious sounds in a journal of the park titled Historical and Descriptive, which was published in 1895. Chittendon was an engineer who was tasked with building bridges and roads within the park. His own description of the phenomenon is as follows:

A most singular and interesting acoustic phenomenon of this region, although rarely noticed by tourists, is the occurrence of strange and indefinable overhead sounds. They have long been noted by explorers, but only in the vicinity of Shoshone and Yellowstone Lakes. They seem to occur in the morning, and to last only a moment. They have an apparent motion through the air, the general direction noted by writers being from north to south.

He also wrote of the sounds:

They resemble the ringing of telegraph wires or the humming of a swarm of bees, beginning softly in the distance, growing rapidly plainer until directly overhead, and then fading as rapidly in the opposite direction.

Chittendon included in his accounts various eyewitness accounts of the sounds, including that of a scientist named S.A. Forbes who thought it sounded like telegraph wires clanging together, a harp vibrating, or voices whispering to each other overhead, and also gave the added detail that the noise was somewhat “bewitching.” Many of the eyewitnesses gave wildly varying descriptions, but one thing they all agreed on was that the sounds were unlike anything anyone had ever heard before. The biology professor, Mr. Edwin Linton, said the sounds were "not loud, but easily recognized, and not at all likely to be mistaken for any other sound in these mountain soles.” Linton’s guide, Elwood Hofer, described the sounds bluntly as the most bizarre thing he had ever heard in all of his days of mountaineering. Chittendon never did find any rational explanation for what could be behind the strange phenomenon. 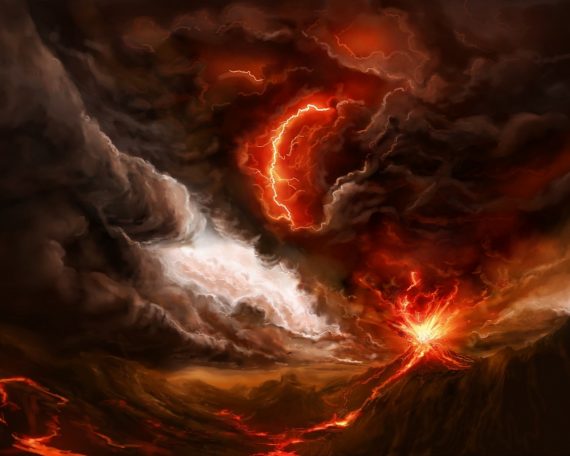 The reports continued into the 20th century, when geologist and chief naturalist of the park, Clyde Max Bauer, also wrote of the noises in 1924, which he had heard on several occasions and described as sounding like the hum of bees which would rise slowly from the distance, pass overhead, and then fade rapidly off into the horizon. Bauer’s close friend, photographer Jack Haynes, also heard the bizarre sound and said it was unlike anything he had ever heard before. The two were so enthralled by its haunting, ethereal quality that they deemed it “the music of the lake.”

Since the beginning when the sounds first entered the public consciousness there has been a mad dash to try and find some cause for them, and theories certainly abound. In 1930, a meteorologist with the U.S. Weather Bureau wrote about the strange sounds emanating from the air above the lake. He speculated that temperature inversions, where warm air above the lake sits upon cooler air upon the lake’s surface, could be causing some sort of “sound mirage,” essentially amplifying or distorting far off noises such as those of geysers or other sounds to produce the bizarre phenomenon. In the same year, an article in Popular Scientist attributed the mystery sounds to mild earthquakes that had had their sounds somehow amplified and twisted by networks of underground caverns. In 1937, naturalist Neil Miner attempted to explain the Yellowstone Whispers as the result of air flowing down the nearby high mountain peaks, which then formed powerful horizontal whirlpools of air which howled out the phantom sounds. Other theories have blamed flocks of birds, volcanic activity, static electricity, wind deflected by nearby jagged glaciers, the sounds of geysers, aerial echoes of some kind, hidden telegraph lines, or some as yet unexplained reaction experienced by ore deposits to radio transmissions, yet none of these have any particularly hard evidence to support any one of them.

There are also of course the more paranormal explanations offered for the eerie, preternatural sounding phenomenon. There are those who believe that the sounds could be produced by the lost souls of drowning victims or the restless spirits of long dead Native Americans of the area. The Yellowstone region certainly has its fair share of ghostly phenomena, with haunted inns and even the ghostly figure of a lost boy commonly spotted at the Old Faithful Geyser, so maybe the whispers are connected to that paranormal activity somehow. Others have pointed to the idea that the mysterious noises could originate with some ancient civilization that perhaps once occupied the region, or even some intelligent force beyond our understanding that is expressing its inscrutable will through these phantom aural phenomena. Another culprit offered for the noises is UFOs, perhaps hovering cloaked and unseen through the skies and leaving behind the bizarre cacophony in their wake.

For all of the speculation and searching for answers, there has never been any definitive or concrete answer to the mystery of the Yellowstone Lake Whispers. Natural phenomena, the voices of vengeful ghosts, the wailing of long forgotten spirits, aliens, take your pick. Whatever lies at the heart of these strange sounds shows no signs of letting up. They are still reported from time to time reverberating out across the majestic landscape here and still boggle the mind as much as they ever have. What forces are at work here thrumming through the skies and grabbing our curiosity? Can we ever really know? The Yellowstone Lake whispers are so far beyond our understanding that it is hard to know how one should even react when hearing them. Should we be amazed when we hear such things? Humbled? Afraid? Perhaps in time we may hit upon an answer to the base causes of this phenomenon and others like it, but until then the eerie song will blast out through the air, chiming out through the atmosphere, our minds, and perhaps our dreams as well.