As most people who read my articles here at Mysterious Universe will know, my main areas of interest are Cryptozoology and Ufology. I rarely ever get into ghosts, haunted houses, and related issues, however. Only because the collective subject doesn't really interest me that much. Now and again, though, I find myself on the receiving end of a story that has cryptozoological ingredients, but which also has ghostly overtones attached to it. On such occasions, I do get involved.

A perfect example is the account of a woman named Jill O'Brien. She had a bizarre encounter - in September 2008 - in Alaska's Wrangell-St. Elias National Park and Preserve. It was an encounter that I was able to personally investigate in early January 2009, as Jill had then recently moved to Oklahoma City, which is not that long a drive from my Arlington, Texas home. So, it was time for a road-trip and a notable interview. Jill's story was as intriguing as it was bizarre.

Before I get to the story, however, a bit of background on Wrangell-St. Elias National Park and Preserve. Established in 1980 by Alaska's National Interest Lands Conservation Act, it's the largest US National Park and covers in excess of 13 million acres. It was at the base of the park's Mount St. Elias - which stands to a height of 18,009 feet - that Jill's extraordinary encounter occurred. As a keen traveler and photographer, Jill was in the area specifically to get shots of the mountain. She got her pictures. And she got something else, too.

When I say that Jill's encounter was of the ghostly variety, don't be assuming that we're talking about chain-rattling ghosts, wailing spirits, or similar such things. Nope. Not at all. We're talking about what Jill came to believe was the ghostly, spectral form of a baby mammoth. Yeah, you did read that right. As Jill prepared to take one particular photo of Mount St. Elias, she heard what she described to me as "thudding" and "crunching" on the ground, and coming from somewhere behind her.

Her first, terrifying thought was "bear." Thankfully, it was not. Jill found herself confronted by a very small mammoth, one that was somewhere in the region of four-feet in height, or maybe slightly bigger. Now, for years, reports have surfaced and circulated suggesting that - against all the odds - in certain parts of the world the mammoth survived extinction and still lives.

I have investigated a lot of cases involving alleged, surviving mammoths. Personally, and for the record, I don't think the mammoth is still with us. It's just not feasible. I do, however, think there is enough circumstantial evidence to suggest it may have clung on for far longer than many suspect. But that's quite another story for another day. Those excited by the prospect that mammoths still live today should note I'm not suggesting Jill saw a young, living, breathing, mammoth. And it's most assuredly not what Jill was suggesting, either. You'll see why. 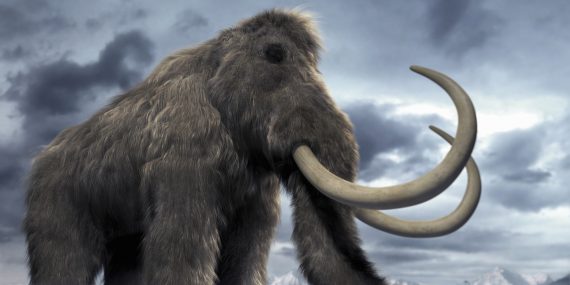 As Jill watched in a mixture of awe and shock, the mini-mammoth raced past her and...vanished. Gone. When I asked Jill to explain what she meant, she said that the animal was suddenly enveloped by a small "black cloud," which "sucked into itself" and disappeared. The entire encounter lasted barely a handful of seconds at most. Jill was, however, very sure of what she had seen. In her opinion it was nothing less than the ghost of a long-dead mammoth.

Whether Jill's case is one for ghost-hunters, or for cryptozoologists, is something well worth pondering on. In terms of the latter, it all depends on how one defines the term "cryptozoology." If we're talking about cryptozoology solely being the study of unknown animals, then no, it's clearly not one for the cryptozoologists. Personally, however, I'm very far from convinced that so-called cryptids are mere flesh-and-blood and nothing else. And, for that reason, I do take note of rogue cases like the one told to me by Jill.

Of course, Jill's testimony - combined with her opinions on what she encountered back in 2008 - is the kind of thing that most ghost-hunters would eagerly want to tackle too. This raises an interesting possibility. One day the fields of creature-seeking and specter-seeking might come together - and even work together - to solve certain, odd and unusual cases like this.

I have a suspicion that the ghost-hunting community will be eager and up for it. As for the field of cryptozoology, I can already see them steaming with red-faced rage and planning to send me hate-mail by the sack-load. Whatever! The fact is that such odd reports crop up on more than a few occasions. Witnesses like Jill need to be taken seriously and treated with respect. Such accounts need to be treated seriously too. Maybe ghost-hunters and monster-hunters can learn a thing or several from one another. Or is that just asking way too much? Unfortunately, from the cryptozoological end, yes it probably is.

UFOs May Be Mining Volcanoes For Liquid Gold