Bigfoot, Us, And The Food-Chain

In 1965, a journalist named George Draper – who worked for the San Francisco Chronicle newspaper - interviewed one O.R. Edwards about a startling and highly disturbing Bigfoot sighting that Edwards had back in 1942. You will soon come to appreciate why the saga was so disturbing. According to Edwards, on the day in question, he was hunting with a colleague, Bill Cole, when they encountered what can only have been a Sasquatch, on Oregon’s Mount Ashland. Edwards told Draper:

“We were both moving slowly and quietly round this patch of brush. Bill went round to the left side. I was on the right. I was sweeping the area ahead with my eyes. On one sweep I caught a glimpse of what seemed like an ape-like head sticking out of the bush. By the time I had brought my head back to focus on the spot, it was gone.” 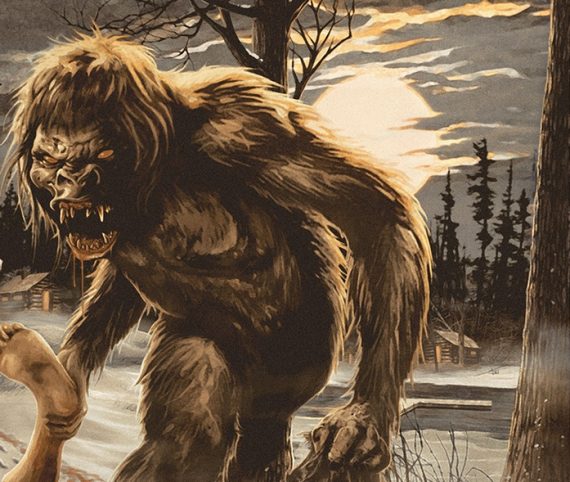 That was nothing compared to what happened next, however: “Then I heard the ‘pad-pad-pad’ of running feet and the ‘whump’ and grunt as two bodies came together. Dashing back to the end of the brush, I saw a large man-like creature covered with brown hair. It was about seven feet tall and it was carrying in its arms what seemed like a man. I could only see legs and shoes. It was heading straight downhill on the run.

“I was about thirty feet away and the opening in the brush was only ten to fifteen feet wide. At the speed he was going, it did not leave me much time to make observations. I, of course, did not believe what I had just seen. So I closed my eyes and shook my head to sort of clear things up. I looked down the hill again in time to see the back and shoulders and head of a man-like thing covered with brown hair. It was disappearing into the brush some seventy to eighty yards below.”

When Edwards realized that Cole was nowhere in sight, he suddenly knew who the man the Bigfoot had abducted was: his very own hunting partner! Edwards fled the area. As he did so, and to his dismay, he saw in a ravine two more Bigfoot. He raced for his car and didn’t look back. Fortunately, Cole managed to escape when the beast dropped him during the course of its fast and furious run, which allowed Cole to charge up the hill and in the direction of his rifle.

As it turned out, the gun was not needed. The Bigfoot, and its two comrades, quickly vanished. Rather oddly, neither man talked to each other about what had happened until 1962. Perhaps the silence was due to two things: Edwards was embarrassed and ashamed about having deserted Cole. And perhaps, in turn, Cole felt no-one would believe such an outlandish account if word got out.

There is a far more important issue that needs to be focused upon. Namely, the matter of why Cole was abducted on Mount Ashland in the first place. That the beast was not alone, but was accompanied by two more of its kind, raises the disconcerting possibility that the creatures were hunting for food in the woods. And Cole almost became their prey. Fortunately, he was able to escape from the hairy clutches of the monster and flee for the safety of civilization.

The idea that Bigfoot may, on occasion, turn hostile and resort to using us as its source of food is disturbing, to say the least. Chiefly, because we consider ourselves to be the dominant species on the planet. Well, maybe that's true. Or, it's true until we venture into the mountainous and forested areas of our world, where the wild things lurk. At which point, all bets are off.