It was in 1995, twenty years ago this year, that the phenomenon of the Chupacabra exploded on the Caribbean island of Puerto Rico. The people of the island were gripped by fear and intrigue when the stories of the alleged vampire-like beast surfaced. In no time at all, the creature (the name of which is Spanish for "Goat-Sucker") became the subject of significant local and international media coverage. Farmers reported their animals were being slaughtered in horrific fashion. There were rumors of UFO links to the mystery. It wasn't long before the story of Puerto Rico's monster was here, there and everywhere.

It wasn't just the story that had legs. The beast itself was on the move too: reports came out of South America, Mexico, and the United States. Even Russia was unable to remain Chupacabra-free. As the reports increased, so did the theories to try and explain what was afoot. People were still talking about UFOs. But that wasn't all they were talking about. Additional theories ranged wildly from secret, genetic experiments designed to create hybrid-monsters to occult rituals intended to summon up the beast from some hellish realm. 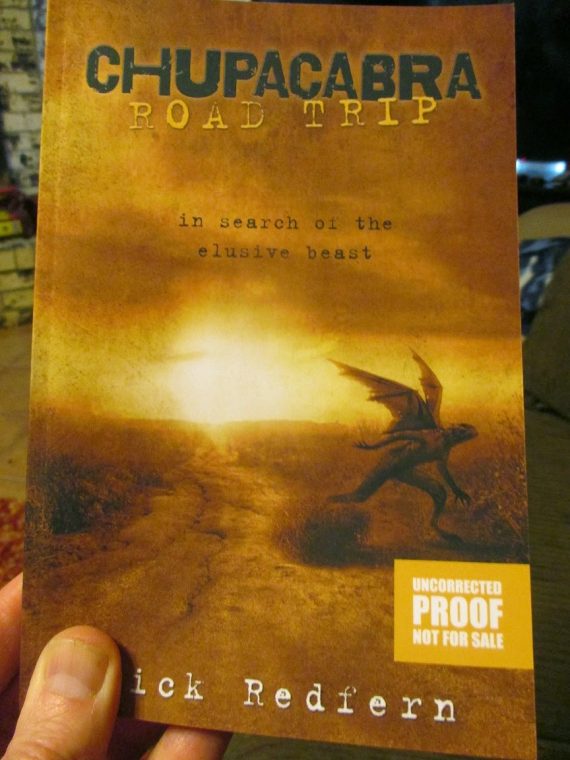 The reason I mention all this is because in the 20th anniversary year, Llewellyn Publications are releasing my new book, Chupacabra Road Trip. It will be published in just a couple of weeks from now. The book is, as the title suggests, a diary-like book that chronicles all my various expeditions to Puerto Rico in search of the Chupacabra - as well as additional treks around Mexico, and various parts of the United States, including Oklahoma and Texas.

I first traveled to Puerto Rico in 2004, with a team from the SyFy Channel's Proof Positive show. As for my most recent trip, you can see the results in the Travel Channel's new series, Mysteries at the National Parks, and specifically in the episode titled "Chupacabra Island."

In the approximately ten years of roaming around Puerto Rico, I have interviewed numerous eyewitnesses to the creature and spoken with a variety of sources to secure their opinions on what the creature is - or is not. That includes veterinarians, police-officers, civil-defense workers, and farmers. Theories range from mass-hysteria to a giant bat, aliens to demons, and much more.

My nine visits to Puerto Rico have shown me that not only is the phenomenon still ongoing, but that mysterious attacks on animals on the island date back long before 1995. Yes, the term, "Chupacabra," was created in that year. Prior to that, however, there was talk of the 1975 attacks of the so-called Moca Vampire, and of deadly Devil Birds. There are 1960s-era reports from Puerto Rico of animals found allegedly drained of blood under extremely unusual circumstances.

One of the problems I found - and which I discuss in the book - is that the name of the beast has become so iconic that just about any odd-looking, mangy animal under the sun has been offered up as a Chupacabra. In my view, there is a real mystery to be solved. But, it's a mystery made more complicated by media hype and mistaken identity. As for the blood-draining: intriguing but completely lacking in terms of hard evidence. Blood-lapping? Yes, rather weirdly, in a few cases. But blood-sucking in The Strain style? I have heard numerous such accounts; actually proving them, however, is quite another matter.

As for the conspiracy theories surrounding the Chupacabra, this is an issue that I got a lot of comments on, and particularly so in relation to (a) what we might call "secret labs," where Frankenstein-like experimentation is said to be afoot; and (b) powerful groups and cults that use the Chupacabra as a convenient cover-story for their animal-sacrifice-based activities. True or not, as I note in the book, I found myself in distinctly hot water on a couple of occasions while addressing these controversial issues and claims.

So, with the publication of the book, is my research into the Chupacabra now over? No. Chupacabra Road Trip is an on the road, margaritas-and-monsters-style account of ten years of seeking the Goat-Sucker. And there is still much more to come.