Dead Giant Oarfish May Have Been Killed by Military

There was a time when seeing giant creatures that resembled the sea serpents of folklore and mythology was a rare occasion. That time is no longer. There was a time when the death of a giant oarfish was a harbinger of earthquakes and tsunamis. Now they may be a warning of something more. In just three months, two giant oarfish have washed up dead on Santa Catalina Island off the coast of southern California. It’s the third since 2013 and the fourth if you include a live oarfish seen last month. However, this one is a big first. It may be the first oarfish to have been killed by military operations.

The 14-foot, 200-pound male giant oarfish (Regalecus glesne) was found on Pebbly Beach on August 17th. Annie MacAulay, president of Mountain and Sea Adventures, was notified that morning and went to dissect the fish. She found that the creature’s tail – which would have added 7 feet to its length - had been self-amputated, which MacAulay says is common when an oarfish needs to lose weight or has metabolism issues. That seems odd since the oarfish had a belly full of krill.

That led MacAulay to speculate that something strange might have killed this specimen. Previously, the dead fish were found before or at the time of seismic activity, but there was none recently in the area. El Nino is warming the waters, which are also becoming more polluted, and either could be a cause. However, MacAulay thinks this one was driven to the shallow waters and its eventual death by offshore naval weapons training that has been taking place near the island. She believes the massive sound blasts shocked the oarfish, weakening and disorienting the gentle giant until it could no longer survive.

The way these fish are built, they've got their long dorsal fins and that's the only way to propel that big huge body that weighs hundreds of pounds. They get caught up in that uproaring and they can't get back to their home.

What good is a “safe” world if we have no other creatures to share it with? 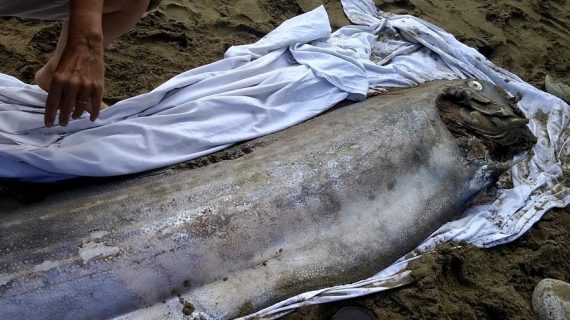 The Mystery Of A Man Who Shot Himself