During a recent broadcast of veteran talk host Art Bell's newly relaunched late night program, now called Midnight in the Desert, one of the most popular conspiracy theories of the last several decades became the focus of the discussion: alternate theories as to the cause of the TWA Flight 800 incident.

Just to recap, the crash of TWA Flight 800 occurred on July 17, 1996, and the official investigation at that time revealed that the plane was brought down by an explosion that originated from within the center-wing fuel tank, possibly as a result of a short circuit somewhere on the plane.

I began getting a lot of emails about this episode of Art's show recently, primarily because I began to express interest with investigation of the case some time ago, and perhaps more specifically, the idea that there may have been reports of aerial phenomenon occurring over Long Island Sound around the time of the Flight 800 crash. One interesting passage I found had been featured in the NTSB's official report on the cause of the crash (which can be read in its entirety here). The relevant portion, titled "Meteorite Strike Information," revealed what I found to be some interesting data:

During the evenings after the TWA flight 800 accident, many meteorites were observed in the northeastern United States. Therefore, the Safety Board considered the possibility that TWA flight 800 was struck by a meteorite, which then caused the CWT explosion. The Board consulted an expert in the study of meteorites, a professor from the University of Pittsburgh's Department of Geology and Planetary Science, to evaluate the possibility of a meteorite hitting an airplane. According to the professor's testimony, knowing the frequency with which meteorites have struck cars and dwellings over the past several decades, and based on a comparison of estimates of (1) the area of the earth's surface represented by cars and dwellings with (2) the area of the earth's surface represented by airplanes in the air at any given time, he calculated that a meteorite could be expected to strike an aircraft once every 59,000 to 77,000 years.

What I found interesting about this short passage, rather than the unlikelihood of an actual meteorite impact with an aircraft, was simply that the investigators had noted an unusual number of meteorites observed around the time of the TWA 800 crash. Thus, this had obviously led them to at least consider whether this could have had any potential for a causal relationship with the crash, which it did not. 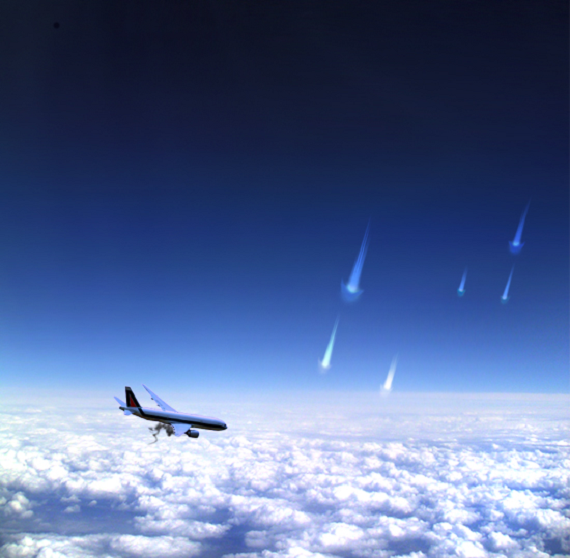 While it had been my hope not to read too deeply into this, or ideas like whether "all" the objects being seen were indeed meteorites, I did wonder if there might be any reports of descriptions involving such things, namely observations made by pilots at the time in that general area. Following this line of thought did turn up some slightly more compelling data than the "meteorite strike" theory alone could provide.

In fact, I did manage to find at least three reports of incidents where pilots, both before and after the TWA 800 crash, described seeing strange luminous objects passing through the sky near their aircraft, which variously were likened to rockets, missiles, or flares. However, in a few cases, multiple witnesses aboard the aircraft in question had described seeing the objects apparently rising out of Long Island sound, and in almost all of those reported instances, the observation took place from aboard multiple commercial aircraft, often departing from JFK airport, and some of the pilots and crews were concerned enough that they nearly diverted their flight paths as a precaution.

The first of these incidents involved two aircraft, British Airways Flight 226 and Lufthansa Flight 405. On November 17, 1995, crew aboard both aircraft described seeing a green object flying 3000 feet above and left of them. Transcripts of the conversation between the pilots and ATC operators in Boston featured descriptions that likened the object to a projectile of some sort.

A later incident occurred on June 26, 1996. TWA Flight 848 was en route to Rome just after departing JFK, when the Coast Guard issued a report that describing what were likened to being “bright flares” that had been seen traveling within 20 miles of Flight 848.

Then on Nov 16, 1996, the copilot aboard Pakistan International Airlines Flight 712 observed an orange light as it passed within a few miles in front their aircraft, moving from left to right. Boston ATC simultaneously tracked two objects in conjunction with this observation on their radars, and the crew aboard a TWA flight which left JFK shortly after Pakistan Flight 712 watched the orange objects rising up out of Long Island Sound, which concerned them enough that they nearly requested to return to JFK. Finally, the pilot aboard Flight 1504, a small aircraft en route from Fort Lauderdale to Boston, later provided a detailed report about the incident, after having heard the exchanges between the aircraft and Boston ATC:

This evening I flew flight 1504 [from Fort Lauderdale to Boston]. It was an extremely clear night over the Eastern Seaboard. You could see the Connecticut shore-line from Cape May, NJ... It was about 10:15 PM when an aircraft asked center the following question: were there any fireworks going off in the area. Center replied in the negative, to the best of their best knowledge. The aircraft then reported they had something streak up towards them from the left and pass in front of them and through their altitude. There was silence on the frequency. I asked center the position of the aircraft reporting the event. Center replied 20nm south of HTO. It was a foreign carrier, but judging by the accent of the pilot, I would say it was Air India or Pakistan Intl. I didn't get a call sign, and to my surprise, center did not ask any more questions. It was a crystal clear night, and we could see the Hamptons from our position. There were no fireworks taking place anywhere. Unless the controller was working both frequencies, the aircraft was at least climbing to or in the high sector. I did a little bit of checking, and found out Air India leaves at 7:30. PM, and Pakistan Intl. leaves at 9:45 PM from Kennedy. It doesn't really matter who it was. Fact is someone reported a streak that came from the ground and to the left of them and passed in front and through their altitude. It was 10:17 when center replied to me that the aircraft was 20nm south of Hampton. Is it merely a coincidence this is close to where TWA 800 blew up, or is something else going on? I don't believe the aircraft was flying inverted and that it was a meteor that streaked by their windshield. Again I was amazed at the silence of the controller after the report. This event certainly got our attention.

it had been these reports of objects seen by pilots that prompted Bill Donaldson, a retired flight crash investigator who founded the Association of Retired Aviation Professionals (ARAP), to express his belief that a shoulder-mounted missile, launched either from the ground or from a small vessel somewhere within Long Island Sound itself, had brought down the plane. 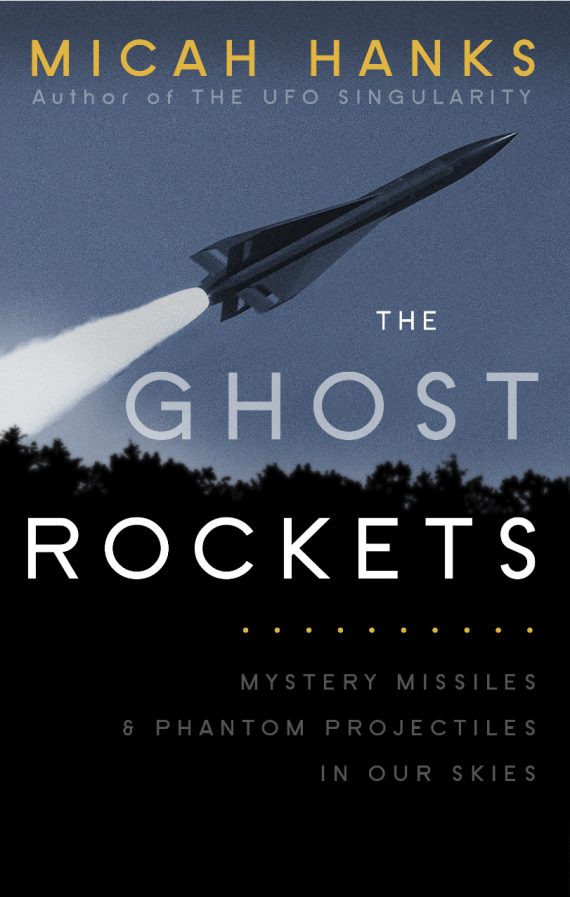 I discussed the aforementioned circumstances in my book, The Ghost Rockets, which examines similar reports of possible meteors and other projectile incidents that are either unexplained, or which seem to involve technologies of an unconventional variety. Shortly after the book was published, an EPIX documentary on the TWA 800 incident aired on television, featuring the research of an American physicist named Tom Stalcup, which presented new data that suggested the origin of the blast that brought down the plane had come from outisde the craft. In a live Fox News appearance, Stalcup debated James Kallstrom, former lead FBI investigator into the TWA 800 crash, the latter of whom argued that if evidence existed that suggests a missile brought down the plane, it would have been "cowardly" of the investigators not to be forthcoming about it until now.

As far as strange objects seen over Long Island Sound, there certainly appears to have been something going on at the time; whether or not such activity could rightly (or should necessarily) be attributed to the crash of TWA Flight 800. Nonetheless, it is easy to see why the circumstances surrounding the incident, at times, have so easily inspired questions about whether the official narrative presented as the cause of the crash was indeed accurate, or at least entirely forthcoming with all the details about similar incidents occurring around that time.

Bigfoot, Us, And The Food-Chain