As I noted in part-1 of this article, in 1957 elements of the U.S. Intelligence community took a keen interest in the controversial claims of a man named William Foos. Specifically because of his alleged extra sensory perception-based skills. They were skills that the FBI, in particular, found extremely interesting and from the perspective of how those powers might be used in espionage operations.

FBI documentation of August 13, 1957 reveals that Bureau agents dug into Foos' assertions very deeply. To the extent that agents even paid visits to his local library, specifically to review copies of recent newspapers for any mention of the man and his supernatural skills. The FBI also recorded the following: "Foos had recently been to Duke University, where he had demonstrated for two days before Dr. Joseph B. Rhine, an eminent authority on the subject and other members of the Parapsychology Department of the University."

Things quickly progressed to a new level. A document of September 6, 1957 informed Alan H. Belmont of the very latest news: "According to information furnished to the Bureau, William Foos allegedly gave a demonstration in extra sensory perception to representatives of military intelligence and Central Intelligence Agency (CIA) sometime during August 1957."

The military said they knew nothing of a CIA connection, but didn't deny that Foos may also have given CIA personnel a demonstration on the very same day. The relevant paperwork on this issue reads as follows:

"Lieutenant Colonel John Downie, Special Operations Branch, ACSI, advised that a representative from the Army Intelligence Center at Fort Holabird, Maryland, had attended a demonstration given by Foos on August 8, 1957, at the Marriott Motor Hotel, U.S. Highway #1, Arlington, Virginia...As far as Colonel Downie knew, there was no representative from CIA at this demonstration; however, it was his understanding that on August 8, 1957, another demonstration was given by Foos to individuals unknown to Colonel Downie, not representing the Department of the Army, however."

The documentation also notes: "Colonel Downie stated that Lieutenant Colonel Leroy C. Hill, the representative from the Army Intelligence Center, is making an evaluation of the demonstration; however, to date he has reached no conclusion. According to Colonel Downie, when Colonel Hill completes his evaluation, he, Downie, will so advise the Bureau."

And that's when everything began to go very wrong for William Foos.

Further FBI files demonstrate that the Intelligence community quickly grew suspicious of Foos and his family. Those same papers reveal much more about what went on in suite 5008 of the Marriott Motor Hotel. On the matter of Foos' daughter, Margaret, the document-collection states that she "was not successful in identifying or reading a Trip Ticket held approximately 16" above the table." Similarly: "A young man, approximately age 17," who was also present, the papers note, had "very limited" success in terms of demonstrating psychic or extraordinary powers. 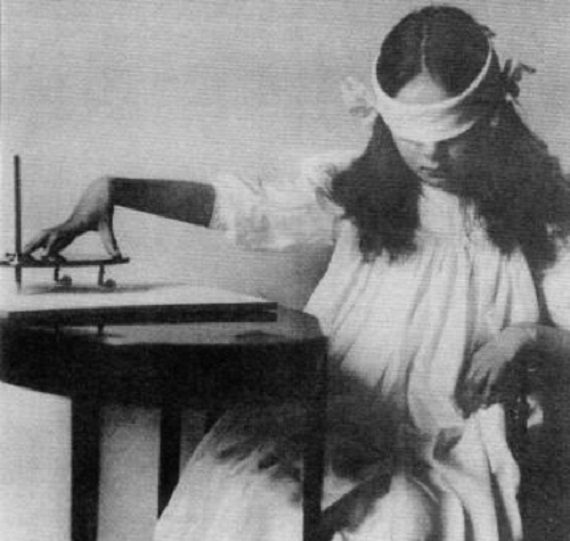 The FBI recorded that one person present - whose name is deleted from the files - was of the opinion that "all demonstrations were merely tricks and can be explained logically by qualified performers in this field." Things got even worse for the Foos family on September 17, 1957. That was the date on which the CIA informed the FBI, "Foos has insisted on using a particular type of blindfold which raises a question regarding the possibility that Foos is using nothing more than a trick by cleverly permitting his daughter to see by 'pinpoint vision.'"

More damning were the words of yet another agent present at the Marriott demonstration. He concluded that, "...Foos is using a blindfold material which permits his daughter to have a considerable area of vision through a tiny aperture in the blindfold cloth." Essentially, that is the end of the story. Game over. U.S. intelligence was far from satisfied by anything that Foos and his family claimed or displayed.

It's not entirely out of the question that some sort of legal action could have been taken against Foos. Of course, any kind of FBI action might have caught the attention of the media - and maybe, even, the Soviets. And, certainly - and very understandably - no-one wanted the Reds to know that U.S. Intelligence was digging into the world of ESP. So, the matter was quietly dropped.

The FBI's final words on Foos: "Recognizing the value of such activity to our counterespionage work, we thoroughly checked the claim and had to conclude that his alleged powers had no scientific basis."