Investigation of Tianjin Blast With Google Maps Finds Something Weird

Over at the Google Earth Blog, an independent investigation of the recent explosions in Tianjin, China, has been underway over the last few days. Apparently, while attempting to look at the area with Google’s satellite imagery, they spotted an odd discrepancy, as noted by blogger Timothy Whitehead in a post added to the site on Monday.

In the Google images, the border between China and Hong Kong can be seen traversing the area. On the Hong Kong side of things, all the streets appear to be mapped normally; however, on China’s side of the map, things appeared to be misaligned. Here’s what they had to say at the Google Earth blog:

While investigating the recent explosions in Tianjin, China, we noticed that the street map of China is out of alignment in both Google Earth and Google Maps. It is tempting to think that the explosions were so large that they shook the street map out of place (the largest, according to Wikipedia, has been estimated as equivalent to 21 tonnes of TNT).

Of course, the Tianjin blasts, no matter how large, couldn't really have been so great in magnitude that they affected the satellite imagery. Nonetheless, a few people were scratching their heads about the apparent misalignment; had it been intentional, especially when we consider the way the Chinese government has acted in a few instances (like this one, and this one) as the investigation of the explosions has been underway?

Quite the contrary, Whitehead explains that this odd feature actually has more to do with decades old policies than current attempts to obfuscate the ongoing investigations in Tianjin. Apparently, the street map offset, "is actually a result of old Chinese regulations from the cold war era."

Business Insider gives us further details on the discrepancy:

The reason behind this discrepancy seems to be a longstanding piece of Chinese legislation. In an effort to stop prying eyes, maps created in China must use the GCJ-02 coordinate system, as opposed to the WGS-84 system that is used in the rest of the world. 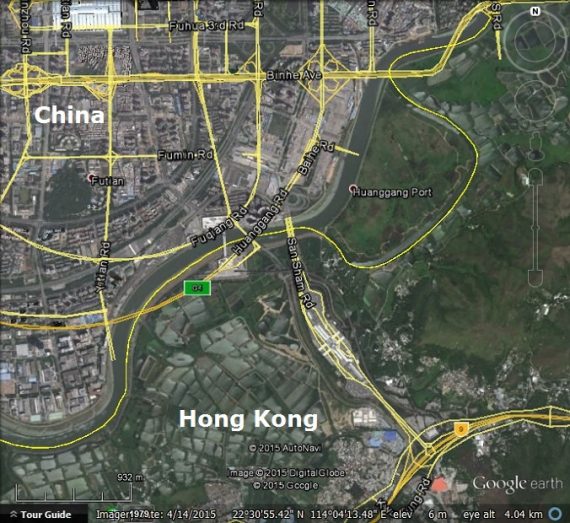 Despite the explanation the Google Earth Blog uncovered, with enough time, the discrepancy described here may end up being touted among the latest conspiracy theories being associated with the Tianjin explosions. With so many questions already surrounding the blasts and their possible causes, perhaps it's only natural that conspiracy theories have begun to emerge; although some of them really are getting to be pretty out there.

Consider the one that Mike Adams reported at Natural News on Monday, which told how Chinese dissidents had secretly informed him that the explosion hadn't been a chemical blast, but was instead the result of a Pentagon attack with a secret kinetic weapon. As the claimed "informants" had said, this attack was in retaliation for China devaluing the Yuan, and thus contributing to currency manipulation that creates unfavorable conditions for international exchange.

Over at my blog yesterday, I outlined why this scenario seems very, very unlikely:

Considering this theory, perhaps the first thing we should ask is, does the notion of "retaliatory action" really make sense? Consider the circumstances: if China devalues its currency, which affects the international economy and places the U.S. in an unfavorable position for trade with them, how much logic would there be behind employing Star Wars-style technology to blow up a factory, murdering innocents, and further upsetting international economic stability (at least for a time)? In truth, the idea proposed by those alleged informants to Natural News makes very little sense at all, when considered realistically.

Not to mention the fact that we are given no context for how the hell these "dissidents" would have even known about a secret Pentagon space weapon in the first place... for more on that, check out my analysis of the present conspiracy allegeations.

Rather than being just another wacko idea about secret U.S. space weapons and the supposed war between China and the U.S. that's already underway, I feel like "explanations" for tragic events such as this, based largely in conjecture that fingers the U.S. government and intelligence communities at all costs, actually convey deeper, and perhaps more disturbing themes.

Specifically, I feel that we begin to find a kind of American self-loathing that exists among the really far out conspiracy minded among us (to whom, rather than using the term "conspiracy theorists", I make the distinction of calling conspiracists, to denote an ideological worldview that caters to virtually every tragedy being the result of some secret group or cabal carrying out "false flag" attacks and the like). As I've noted before, there is plenty of historical precedent for conspiracies, as well as the U.S. intelligence community's involvement in affairs in other parts of the world. A prime example of this kind of thing would involve the Iranian Coup of 1953, and how the CIA finally admitted its long-suspected involvement just two years ago.

Also, back around 2001 the 1960s-era drafts for the proposed Project Northwoods were making news, as the reality began to sink in regarding the depths to which the American intelligence agencies might have gone to thwart Communist enemies of the western world.

In this context, international affairs begin to look a lot like pro wrestling matches: bigger than life "good guy versus bad guy" bouts, featuring dudes in tight panties that parade around on stage while the entire world watches. And unbeknownst to the masses, the entire game is rigged, with the outcome of every battle already predetermined. Here, rather than doing it for entertainment, it's done for purposes of control.

Still, the fact that these sorts of things have happened doesn't present us with proof that CIA handlers had arranged for events like the Boston Marathon Bombing of 2013, or that more recently the Pentagon used a secret kinetic space weapon to teach China a lesson about what happens when they manipulate currency (just like the U.S. has already done for decades).

But here's what it does mean: now that we know what our government is capable of, many will never be able to look at things happening in the world around us without suspecting similar covert string-pulling. That fact is made very evident by the proliferation of conspiratorial themes in the media today, and not just in America, but virtually all parts of the world.

The fact is, some are just more suspicious than others... whether or not those suspicions are founded in logic. However, in the modern world, often it's the case that little more than an idea -- and perhaps one's own skepticism -- is required in order to give ourselves to belief that there is "something more" at play.

As the Tianjin investigations are underway, we're already seeing a lot of suspicions among bloggers and independent researchers, and we're likely to see a lot more in the days to come. So perhaps, rather than promoting ideas about "false flags" and Star Wars-style warfare waged from space, we can look at the discrepancies as they turn up a bit more carefully, and try to find the actual reasons behind them... just like the Google Earth bloggers managed to do.