Lizard Man May Have Returned to South Carolina

The U.S. may not have a Loch Ness Monster, but residents of South Carolina are just as proud (or afraid) as Scots are of their own creepy cryptid – the Lizard Man of Scape Ore Swamp. First spotted in 1988, the seven-foot tall reptilian is back in the news after a woman took a photograph of one on August 2nd in Bishopville, SC. Shortly after that, another witness came forward with a video he took in May of a similar humanoid creature in the same area.

Went to church with a friend in Bishopville and we saw lizard man come out of the woods and run along the tree line. Took this picture zoomed in with my phone. My hand to God, I am not making this up. So excited!

That’s the eyewitness account from the photographer named Sarah (no last name revealed) who said they were a mile from Scape Ore Swamp where most of the Lizard Man sightings have occurred, including the first one on June 29, 1988 by 17-year-old Christopher Davis.

Davis claimed he had just finished changing a tire at 2 a.m. when he heard a thumping noise and saw a seven-foot creature with glowing red eyes running towards him. He managed to get in the car where he got a better look at Lizard Man.

(It had) three big fingers, long black nails and green rough skin. It was strong and angry.

As Davis drove away, he said the Lizard Man hung onto his car, scratching the roof and damaging the side-view mirror. Plaster casts taken of footprints found at Davis’ sighting did not match any known animal. Two weeks later, on July 14, a couple living near Bishopville reported that their car had received similar damage and other residents began to come forward with their own stories of a seven-foot creature with red eyes.

Additional sightings of a strange creature in Scape Ore Swamp were reported in 1990, 2005, 2008 and 2011. Those in 2008 and 2011 also reported damage to cars similar to previous encounters. Numerous articles, reality show episodes and at least one book have been written about the Bishopville Lizard Man.

The two witnesses believe they saw the Lizard Man. They’ve presented their evidence. What do you think? 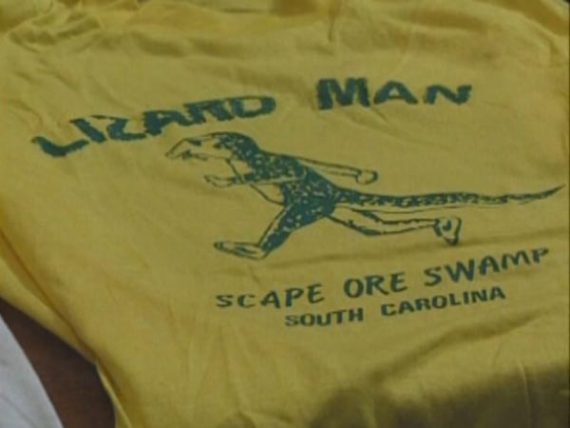 Orang Pendek: A Cryptid Likely To Be Caught