Humankind it seems has a definite desire to somehow transcend the amorphous barrier between life and death to communicate with the spirit world. Throughout history we see examples of rituals, rites, and a variety of other efforts to make contact with the afterlife, to somehow connect with what lies beyond and with the dead that inhabit these realms. Even in modern days we can see such things, ranging from elaborate New Age spells, to channelling and seances, all the way to the seemingly innocent game of the Ouija board. Yet while the prospect of making actual contact with spirits from beyond may seem frightening to some, perhaps nowhere else is it more so than in a popular Indonesian game in which the dead are called forth to possess and animate decidedly creepy dolls crafted just for this purpose. If you think ghosts and haunted dolls are spooky, then you are sure to find the game of Jelangkung to be very disturbing indeed. It is an ancient ritual that rolls together all of the weirder elements of channelling, seances, and the Ouija board to create an experience that manages to become somehow scarier than all of them combined.

The Indonesian game of Jelangkung plays out like sort of a mix between a seance and a session of the Ouija board, with the addition of freaky little dolls thrown into the mix, during which the “players” attempt to draw ghosts or spirits into specially made dolls in order to communicate with them. The game is typically played by 3 or 4 people, often in haunted places, and almost always late at night between the hours of 10PM and midnight, typically on a night of a bright moon. The game is said to trace its origins back 1,500 years to the Chinese game of Cai Lan Gong, which roughly translates to “Vegetable Basket spirit” because a vegetable basket was once used to sit the dolls in. In the Chinese version of the game, the gods Poyang and Moyang were invited to step into the dolls to act as a sort of divination device. It was a game which was often played by teenagers during moon festivals and the name of which became the Indonesian name Jelangkung. The Indonesian version took things a step further, stepping beyond the origins of merely being an innocent method of divination for children and becoming a general and rather sinister way to channel all manner of spirits into our world and almost always performed by adults. 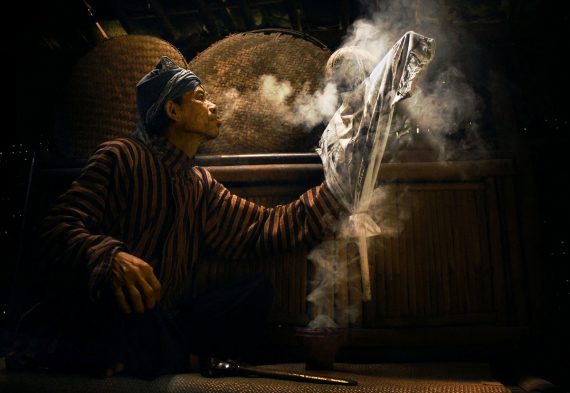 There are several things needed to play the game. First is the dolls themselves. They are usually crafted from a coconut shell for a head and with a wooden body, and it is said to be imperative that they be dressed in regular clothing, with a face drawn onto them. In some versions, a key is tied to a necklace around the necks of the dolls. The hands of the dolls are fitted with some sort of writing instrument with which to write the responses from any spirits successfully called forth. The next important thing needed is incense, which is burned throughout the ritual and supposedly helps to lure in the spirits. Also needed is some form of stationary, something for the dolls to write on once they are possessed, with the paper often being adorned with letters of the alphabet in advance, strikingly similar to a Ouija board. Some people use a blackboard rather than paper, and chalk tied to the doll’s hand rather than pen or pencil.

When the game is ready to begin, the players will surround the doll and cast a spell or chant a mantra or incantation, beckoning any nearby spirits to come into the doll. In some places, such as the island of Java, a scarecrow is used instead of a doll, which is no less terrifying. The spell or mantra will be repeated as many times as needed until the doll has been deemed to be possessed, usually due to a perceived increased weight or by the doll suddenly tipping over moving inexplicably. In some versions the dolls is held upright by two handlers during the ritual. The types of spirits that are said to enter the doll are numerous, but are usually the ghosts of people who have died tragically, such as through suicide, murder, or a horrific accident, although sometimes more malignant entities such as demons are believed to enter. In general, it is uncertain of exactly what will enter the doll and there is no control over such things, with the ritual basically being an open invitation to any apparition, spirit, or demon that happens to be in the vicinity.

Once the spirit, ghost, or other entity has entered the doll, it is customary to ask it to introduce itself, after which it will allegedly write its name down on the provided paper with the writing instrument attached to the doll’s hand. It will also usually explain who it was and how it had died. After this, the players may ask whatever they want of the spirit, the answers to which it will either write on the surface provided or circle in letters which have been prepared beforehand through the writing instrument on the doll's hand. For "Yes" or "No" questions, the doll will dip the key around its neck into either a cup of coffee or a glass of water, or simply circle a "Yes" or "No" written on the board or paper. The kinds of questions asked of the spirits are diverse, ranging from simple or childish questions such as who likes who, to which lottery numbers will win, to numerous questions about the future or luck of the players, to more somber and pressing questions such as who will die first or about diagnosing illness or unconventional ways to treat diseases.

Although over generations the game has become popular in Indonesia for young and old people alike to play out looking for a good scare, older Indonesians have long warned against dabbling with it, especially for people who are not well versed in the occult or magic. It is said that the game holds many inherit dangers, not the least of which is that it is said to be much harder to coax the spirit back into its realm than it is to call it forth, and this could lead to the entity deciding to stay and run amok to cause all manner of trouble ranging from poltergeist activity to haunting the house to actual full blown possession of one or more of the players present. It is not uncommon for the ghost or ghosts present to cause mischief during the game as it is, so if they refuse to leave it is believed that they can cause all sorts of strife. Even if the entity is in fact willing to leave it is said that if the players end the game abruptly, or fail to properly say goodbye to the spirit residing within the doll, then it can become angry and lash out at the players. It is certainly not a game recommended for the faint of heart or for those not fully prepared to deal with what they may call forth into our reality. For these reasons, although popular, Jelangkung is mostly seen as something that is forbidden to do, as it is seen as trifling with forces we do not yet fully understand. In many ways it all sounds so very similar to the myths and warnings surrounding the use of the western Ouija board. 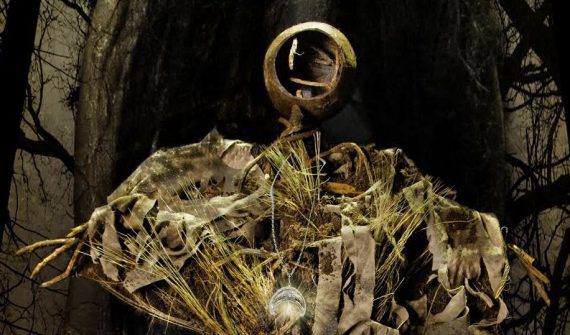 The mystique and fear surrounding Jelangkung have become very entrenched in Indonesia, where it has truly become the stuff of horror movies, spawning various horror films and TV shows, including the hit Indonesian movie Jelangkung in 2001, which was followed by two sequels, Tusuk Jelangkung (2003), and Jelangkung 3 (2007). It seems that although this may appear to be merely to be an urban legend or spooky campfire story, it is a very real phenomena for many Indonesians, one that has managed to inspire both wonder and terror. But is any of it real? Are there ways to communicate with the land of the dead, to converse with the spirits of the dead or even demons? Whether there are or not, it seems that human beings will always be inclined to at least try. For it seems that the powerful lure of making contact with the dead by whatever means is as old as time itself and is unlikely to fade anytime soon.

The Mysterious Unsolved Case of the Monster with 21 Faces