The Sky is Turning Green Around the World

Green may be your favorite color but it’s not a good thing when the nighttime sky gets a green glow and green UFOs appear to fall from space. That’s what’s been happening around the world recently. A green glow was seen over Chicago along with an orb, two different green fireballs were spotted over Argentina and others were witnessed over Australia and Cancun. Is someone or some thing trying to tell us it’s really time to start going green?

The video of the green glow and orb over Chicago was taken during the last week of July. The anonymous uploader said there were many witnesses and that the structure with the glow and orb over it is Soldier Field. Did the orb cause the glow or was it attracted to it? There’s not much more to go on here. No events were scheduled at the field and there were no tornadoes in the area - which many believe green lights in the sky are a forewarning of.

The first green fireball over Buenos Aires, Argentina, appeared on July 30th at 9pm. Witnesses reported it was visible for 10 seconds and had an orange tail. Other reports of this fireball were made in Brazil and Uruguay. 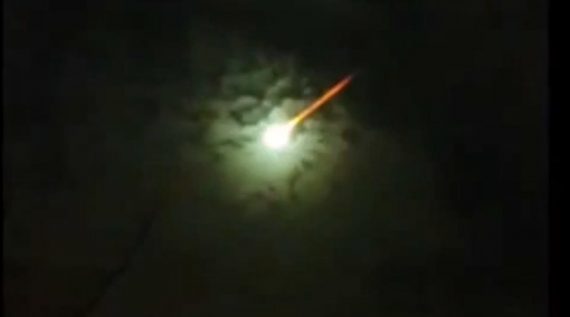 The intensity of the glow led some to believe it was more than a meteor or a fireball. Green fireballs in general have been a concern since they first began appearing in the 1940s around military bases and nuclear testing facilities, prompting the short-lived formation of the green-fireball-watching Project Twinkle in New Mexico.

A second green fireball was seen (at 2:37 in the video) on the following day at about the same time over Cordoba, Argentina, which is 700 km (435 miles) northwest of Buenos Aires. As of this writing, no other reports have appeared on this fireball or any more over Argentina.

However, a green fireball was seen a few days earlier on July 20th at 2 am over Cancun, Mexico. And on July 30th, a photographer captured an image of a green fireball over Jervis Bay on the south coast of New South Wales, Australia.

There have historically been numerous arguments about whether green fireballs are meteors, UFOs, atomic fallout, space debris, weapons or something else. Those arguments continue to this day when green fireballs are seen. Now we have a series of them around the world in about a week. And don’t forget the green glow and orb over Chicago.

What do you think we’re dealing with this time?