If you thought sharks, bugs and people too large to be wearing thongs were the only scary things you’ll encounter at the beach … here’s one more that may top (or possibly sink) them all. A beach at Inskip Point near Fraser Island in Queensland, Australia, disappeared down a hole, taking with it cars, vans, trucks, tents and sand. The hole keeps getting bigger as people and other vehicles are evacuated. What’s going down Down Under?

Local media reports the mysterious disturbance causing the hole was first felt by nearby fishermen.

There was fishermen apparently nearby who said there was this noise and the next thing the sand just started moving out to sea.

Witnesses say the hole opened at around 10 p.m. on September 26th and immediately began swallowing vehicles, tents and camping gear at the MV Beagle campsite. Campers were terrified as it quickly consumed everything in sight.

… [i]) sounded like a thunder noise … it was amazing to see … people were basically on the edge of it with their van, trying to madly get their vans out.

Over 300 people were evacuated as the hole quickly grew to 200 meters by 100 meters by over 10 meters in depth and showed no signs of stopping. As other nearby campsites were warned to stay away and possibly prepare to leave, experts tried to determine what happened.

Inskip Point has a history of small sinkholes and Queensland recently experienced some earthquakes, but geotechical engineer Allison Golsby did not see a link or possible cause.

This area has a history where sinkholes occur regularly, it is something to do with the way sediments are formed and the way water moves through the Earth over millions of years or thousands of years. An earthquake can trigger a sinkhole from a cavity but it has to basically happen on the day or in a very close time frame to the earthquake. In this case I don't see the link.

Then what caused the earth to open and take a huge bite out of Inskip Point? 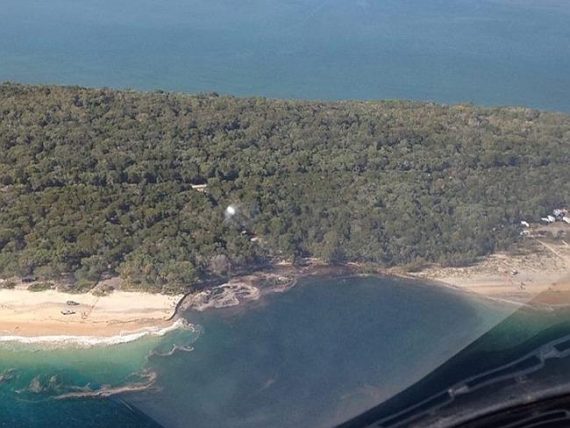