Over the last several months, concerns have risen among marine biologists over the alarming number of cetacean deaths occurring in the Pacific Ocean. Since May, NOAA has documented at least 30 whale deaths in the Gulf of Alaska alone; earlier in the year, a similar rash of deaths had been widely reported along the California coast just as well.

The deaths haven’t been relegated to North America, however. In April, nearly 100 dolphins washed ashore in Japan, causing concerns among some that a tsunami might ensue. Within weeks, a deep ocean earthquake did occur, although no conclusive correlative link between whale deaths and earthquake activities has been determined.

In a typical year, the average number of recorded whale deaths is eight or less. The heightened number occurring at present has been labeled an “extreme mortality event” by scientists, while research into the possible cause suggests algae in Pacific waters may be to blame.

Since June, an unprecedented toxic algae bloom had begun to occur off the Pacific coast, made possible by warming Pacific waters and fair, sunny conditions. Researchers with NOAA say that climate change is not to blame, however, instead suggesting unusual conditions presented by El Nino are the likely contributing factors.

While the whale deaths in the Pacific remain alarming, ocean life have not been the only species that appear to have been affected by changing environmental conditions this year. Since May, a sharp decline in saiga, a variety of Asian antelope, have caused tremendous concerns among experts. It is the first time such a die-off of saiga has occurred since 1988, and according to current numbers, more than 100,000 total deaths have occurred, while LiveScience reports that more than 60,000 of them died within the span of just four days. At present, more than half the world population of the species is believed to have succumbed. 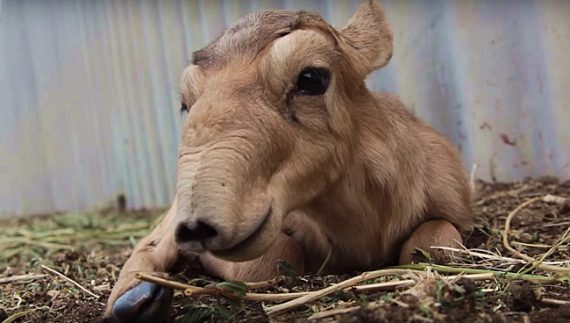 As to the possible causes underlying the antelope deaths, the fact that last winter had been unusually cold, followed by a warm, wet spring, led to conditions among vegetation that might have been especially conducive to the spread of common varieties of bacteria--namely Clostridia and Pasteurella--the latter of which had been the ascribed cause of the 1988 die-offs.

The undeniable concern in every instance, whether it involves marine or terrestrial species, is that changes occurring on planet Earth are becoming well suited for such die-offs, and that human action may be contributing to what some are already calling a mass extinction.

In January, National Geographic reported on a study from late last year that detailed animal die-offs on the rise, particularly among various bird and marine species:

[A] study, published this week in the Proceedings of the National Academy of Sciences, is the first to examine whether mass die-offs have increased over time.

Researchers reviewed historical records of 727 mass die-offs from 1940 to 2012 and found that over that time, these events have become more common for birds, marine invertebrates, and fish. The numbers remained unchanged for mammals and decreased for amphibians and reptiles.

Disease, human-caused disturbances, and biotoxins—like the red tides caused by algae that are prevalent along American coastlines—are three major culprits.

In addition to the concern over rising die-offs, another paper published in Science Advances in June labeled the increasing deaths "the world's sixth mass extinction," which according to the study's authors, began about 40 years ago.

While it seems hard to rule out the effects of such things as climate changes or other possible ways that humanity is affecting the environment, what we are learning from the current spate of animal deaths is that very small factors in the environment--even those which are microscopic--can have an incredible effect on the greater lifeforms they interact with.

The big question, perhaps, has to do with whether we will be capable of influencing such changes, before a significant decline in biodiversity runs the risk of upsetting not only the future of various animal life on Earth, but humanity just as well.