The history of paranormal claims relating to police investigations and missing person reports is one addled with controversy and, at times, confusion. While many believe that to rely on the purported abilities of a psychic intuitive could be potentially misleading, let alone the very height of pseudoscience, some have claimed to have had an uncanny track record with helping solve crimes through seemingly otherworldly means.

In his book The Lonely Sense: Autobiography of a Psychic Detective, British psychic and author Robert Cracknell outlined his assistance with a number of English police investigations over the years, many of which had not seen disclosure of his involvement publicly. At times, some police agencies in the UK and elsewhere have managed to be more open about these sorts of "unconventional" methods of investigation. However, a new memorandum may have outlined things such as the use of ESP in solving crimes as somewhat standard practice; so long as the information gleaned in such circumstances is treated with care by official investigators.

The Telegraph reported on the new guidelines, set forth in an advisory document issued by the College of Policing:

Police investigating missing persons cases should look into information they receive from psychics, clairvoyants and witches, according to official new guidelines.

The College of Policing, which governs training for officers across England and Wales, said police hunting someone who has disappeared should evaluate reports from people who claim to have “extrasensory perception”.

But the guidelines warn that such information should not be allowed to become a “distraction … unless it can be verified”.

The Telegraph article goes on to list a number of instances where British police had solved crimes that coincided with assistance from those claiming psychic abilities. It further notes that families of missing persons may find certain comfort in knowing that all avenues have been explored in an effort to find their loved ones, which may include "tips" from psychic detectives.

The practice of gathering information from psychic sources is not specific to the United Kingdom, however. One notable instance in the U.S. can be found in an appendix section of a U.S. Park Service report on the disappearance of Dennis Martin, a young boy who vanished while camping with family members over Father's Day weekend near Spence Field, in the Cades Cove Wilderness of Eastern Tennessee in 1969. 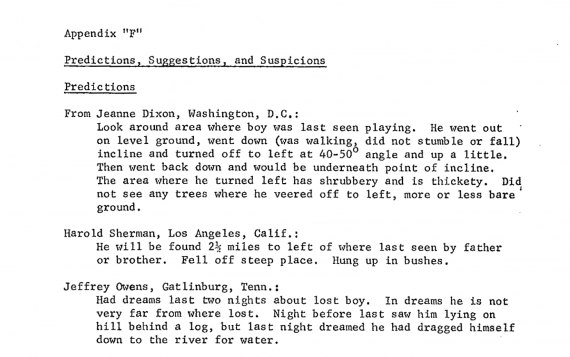 A can be seen in the relevant excerpt above, a number of predictions about the child's whereabouts were detailed in the report, including one from Jeanne Dixon, who at the time was recognized nationally as a popular psychic celebrity.

Another portion of the document details further predictions made about the child's whereabouts, some of them made anonymously:

Mr. Billy Noland, Psychic Interpreter of New Orleans, LA., arrived on June 25, talked with the family and headed for Rocky Top on the [Appalachian Trail].

On June 26, Carson Brewer of the Knoxville News-Sentinel called and forwarded a suggestion received from a lady telling us to start looking in trees and treetops – stop looking on the ground.

Telegram received on June 22, from Glen Chandler, Rt. 1, Mascot, Tenn. Take several friendly dogs including the Boyzone, put package containing food and plastic raincoat around neck. Released dogs 1-2 miles apart. Be sure dogs are lost same as Dennis. By chance one may find his trail and follow him for friendship. Dogs could be released by helicopter. Thank you.

Info called in to Cades Cove Store, caller unknown: two branches go through Spence Field and come together. There's a hole. You have to step in it to know it's there. Fern growing out of it.

Sadly, despite the massive search efforts involved, Dennis Martin was never found. There were, however, a number of compelling leads, one of which involved a "rough looking, dark figured man" who allegedly screamed at a family hiking at Rowan's Creek trailhead a short distance away. I discussed these various leads in previous MU articles about the disappearance (which can found here and here). However, one of the more promising clues had been a footprint of a small boy’s Oxford-style shoe, which researchers found at a location near the Pigeon River within 3.5 miles of Spence Field, where the Martin family had camped the night before.

While none of the psychic predictions managed to prove useful in during the investigation, the discovery of the Oxford shoe print does bear similarity to the third prediction listed on the document excerpt above, made by the individual named Jeffery Owens.

Some years after the failed search and investigation, an illegal ginseng hunter eventually came forward, claiming he had found the scattered bones of what he believed to be a small boy, virtually in the same area as the shoe print. However, fearing arrest for his illegal ginseng gathering, the report was not issued until years after the purported observation, and Park Rangers were unsuccessful in locating any remains that may have indicated the fate of Dennis Martin.

As the Martin case shows, some disappearances are far more difficult to solve, and as noted by frustrated searchers at the time, perhaps the tremendous presence in the Great Smoky Mountains National Park in response to his disappearance only aided in obscuring any possible leads due to contamination. Could any of the "predictions" have been correct in their determinations about his whereabouts, and if so, how reliable can this sort of information be in the ongoing search for missing people, both in the U.S. and elsewhere?