Exploding African Lake May Be Getting Ready to Erupt Again

In Africa, there are three lakes known for exploding and releasing carbon dioxide - Lake Nyos and Lake Monoun in Cameroon and Lake Kivu on the border between Rwanda and the Democratic Republic of the Congo. The two million people living in the vicinity of Lake Kivu have heard rumblings that it’s about to explode again after a long dry spell. The government says a degassing plant has finally passed tests and will begin removing and releasing the carbon dioxide harmlessly so there’s nothing to worry about. Really?

Lakes Nyos, Monoun and Kivu are the only three lakes in the world to have limnic eruptions where the water is loaded with dissolved carbon dioxide from the lake bottom that can explode and release enough gas to kill humans and animals living nearby. In 1984, Lake Monoun erupted, killing 37 people. At the time, the cause was unknown and many believed the explosion and gas release to be a terror attack. In 1986, Lake Nyos erupted, releasing anywhere from 300,000 to possibly 16 million tons of carbon dioxide. The gas cloud covered a valley and suffocated at least 1700 people.

To prevent disasters like this in the future, engineers set up degassing pipes in both lakes that lift the water out, release the carbon dioxide and return the safe water back to the lake. They also found that Rwanda’s Lake Kivu, 2,000 times larger than Lake Nyos, was full of carbon dioxide and methane and hadn’t erupted in at least a thousand years. Uh-oh. 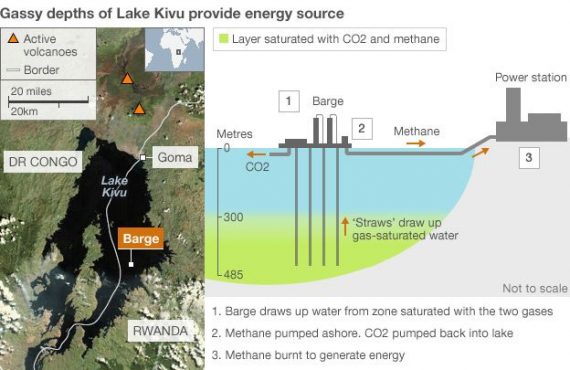 The Rwandan government started the Kivu Gas Project seven years ago and announced in mid-September 2015 that the Kivu-Watt Methane Gas plant had finally successfully released carbon dioxide from the water and captured the methane to be used for electric power generation. Will the degassing relieve the fears of the 2 million people living near Lake Kivu?

An explosion can be triggered by a landslide, an earthquake or a volcanic eruption. Lake Kivu is near Mt. Nyiragongo which last erupted in January 2002. News of eruptions and earthquakes around the world trigger fears in of an exploding lake. Will the plant become fully operational in time and degas enough water to prevent a disaster? No one knows for sure.

Lake Kivu is also known as the place where many victims of the Rwandan genocide were dumped. Let’s hope the lake does not take revenge but instead helps improve the lives of the survivors.