Family Claims Lives Ruined From Living Next to Area 51

Why would anyone want to live next door to Area 51 – the top-secret Air Force base, testing facility, UFO repository and who knows what else? A good reason might be that you were there first. The Sheahan family that has owned the Groom Mine adjacent to Area 51 for 130 years says the Air Force has ruined their lives and now wants to buy the mine and get rid of them. 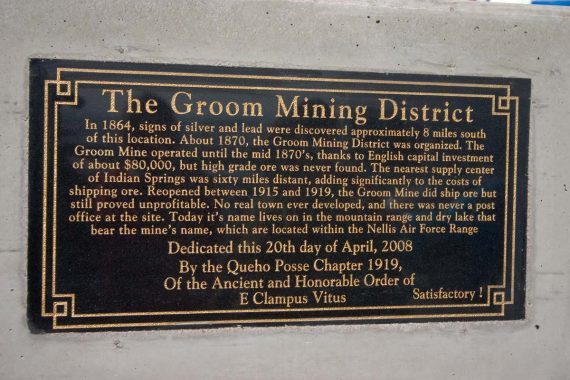 The mine was originally part of the Conception Mines – low-grade silver and lead ore mines located in the southern part of what is now the Groom Range. The name comes from the "Groome Lead Mines Limited" financing company. J.B. Osborne acquired the mines in 1876 and leased them to other operators, one of which was the Sheahan family, which worked their mine until the 1950s.

The Sheahans say the Air Force is responsible for them having to close the mine and subsequently ruining their lives. They claim that atomic bomb tests forced them to suspend operations a number of times. After the Groom Lake test facility was opened in 1955, buildings on their property have been strafed and bombed by military planes and a bomb may have destroyed their mill, closing the mine for good.

The Air Force denied responsibility but the Sheahans say it also chased away prospective buyers, forcing their grandparents into debt. The government then closed land around their mine to the public, requiring the family to go through checkpoints and submit to frequent searches. They’re not a security threat, says Groom Mine co-owner Barbara Sheahan-Manning.

The truth is you can get more of a view of what's going on on that base through Google Earth and pictures that are out there all over the Internet.

What will it take to relieve this family’s pain and suffering from living next to Area 51? The Air Force has offered a $5.2 million buyout for the 400 acres in their possession. If they don’t accept by September 10, 2015, the property will be condemned and taken through eminent domain.

This is unsatisfactory to the Sheahan family. Co-owner Joe Sheahan puts it this way:

Is it okay to bomb your citizens, hold 'em at gunpoint and then -- just to add insult to injury -- just steal their property? Either give us our property, leave us alone, or pay us what you owe us. What the American people have got to realize is if they can do this to us, they can do it to each and every one of them

Can they? I suppose they could if we all lived next door to Area 51. Do the Sheahans have a right to stay on their family land? Should they take the money and run? Should they be offered more for their pain and suffering? How much more? Why is this 400 acres so important to the Air Force?

Is it really the Air Force that wants this land?