Flying Jellyfish UFOs, and a Synchronistic Message from the Past

I have long held a fascination with the idea of synchronicity, which involves an individual's perception that the simultaneous occurrence of otherwise unrelated events appears significantly related, despite having no actual, discernible connection. The concept was first proposed by Carl Jung, who authored a paper explaining the idea in 1952 titled, "Synchronicity – An Acausal Connecting Principle". However, Jung had expressed the general idea in earlier writings, going back as far as the middle 1920s.

Jung had even offered the idea that "meaningful coincidences" like these may hold a key to understanding purported instances involving paranormal phenomena. However, the generally accepted attitude toward synchronicity among psychologists today is that the any perceived correlations that appear in this way become meaningful only in the mind of the observer, perhaps based upon some superficial significance one or more of the "synchronistic" elements had been assigned previously in that observer's mind.

Whether or not a solid argument could indeed be made for any greater significance to synchronistic events, my interest in the subject has inspired a bit of record keeping on my part, in an attempt to make note of the more interesting coincidences I've experienced over the years.

One particularly odd--and humorous--synchronistic occurrence in recent memory took place last October at the 2014 Paradigm Symposium in Minneapolis, Minnesota. My longtime friend Phyllis Galde, editor in chief of Fate Magazine, came to the event to visit with me, and I offered to have her share a table with me in the vendor room.

Around that time, Phyllis has been going through something of a "liquidation" for the last several months, which had involved finding good homes for a number of books that had belonged to the late David Godwin, the managing editor of FATE for a number of years. (In fact, thanks to Phyllis, I've been fortunate enough to become the "caretaker" of a number of David's obscure volumes, including works by Manly P. Hall, and various other books on magic, secret societies, and the history of occultism.)

Anyhow, while visiting at the Symposium, Phyllis brought over another book she thought I might appreciate, which had been one that David owned in his childhood. It was a colorful 1951 book titled, "Rockets, Jets, Guided Missiles and Space Ships," by authors Jack Coggins and Fletcher Pratt, with a foreword by the well known author Willy Ley. 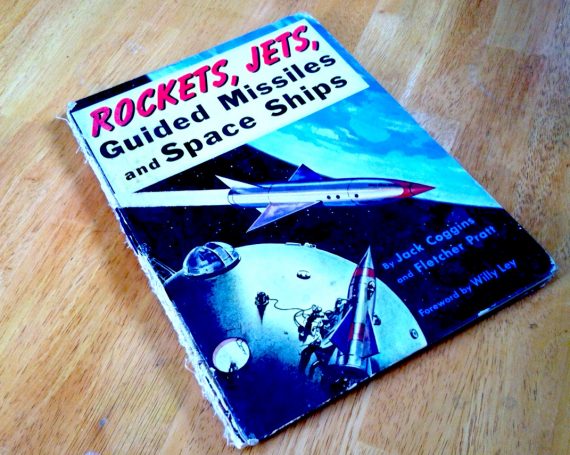 It was a charming little treatise on the space age, though tattered and worn from years of shuffling amidst the shelves of Godwin's collections. Within, I found that David had inscribed his address on the inside of the book, crudely written in all capital letters like a young boy might have done in the 1950s (so crudely, in fact, that I believe the letter "N" in "Godwin" was backwards). Over the years, it was obvious David had gone back and added his own humorous illustrations throughout the book as well, which included a hilarious, irreverent face on what appears to be the planet Mars, as seen from Phobos or some other Martian moon.

However, there had been another illustration in the volume that particularly caught my eye, and to understand its significance requires a bit of background.

A number of years ago, I became appraised of an odd UFO incident that occurred in Denmark during the 1970s, which involved a photograph of a strange, hovering jellyfish-like thing in the distance. A crude translation had dubbed the subject of the photo "Der Flying Gople", which simply means, "the flying jellyfish." 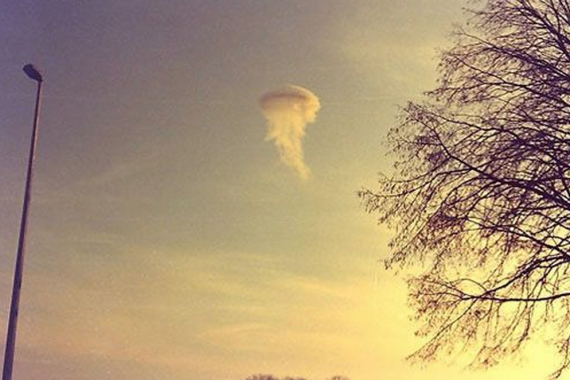 This particular photograph had been explained as being a "dampsky", or a puff of smoke, in essence, produced by one of the exhaust shafts of a nearby factory. I always found the image to be noteworthy, in a humorous way, since it did indeed depict this cloud-like bubble with what resembled tentacles dangling down beneath.

For years, my associates and I laughed about "Der Gople," the great flying jellyfish, and on one occasion at a UFO-themed event, a few friends and I even attempted to create an homage to our gelatinous lady of the skies using an array of balloons and glow-in-the-dark paint to construct a monstrous, flying jellyfish. With time, Der Gople even began to serve as the mascot for Middle Theory, a news and events podcast my cohost, Christopher McCollum, and I produced together for a short period. Even today, listeners of that program often regard mention of "Der Gople" as a sort of inside joke, nearly on par with the "Flying Spaghetti Monster" or similar crude and silly concepts that adorn modern fringe culture.

The persistence of the meme has even led to the creation of some awesome fan art over the years, including this awesome little knitted rendition made by Amber Terrell, a longtime listener of my podcast The Gralien Report: 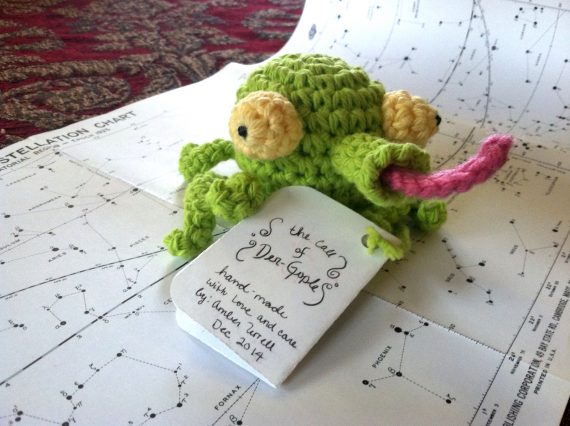 With a more complete understanding of the significance of the flying jellyfish creature in my own personal mythos, we return again to the events that transpired in Minneapolis last October, and my acquisition of the young David Godwin's book on Rockets. It was a volume which, with little doubt, Phyllis had decided to give me because of my own authorship of a book on what were called "Ghost Rockets" seen over Scandinavia in the late 1940s.

Opening to the first page, just above the heading that reads "Introduction," young David had drawn in an unmistakable visage, for which my recognition in that moment welled up into a sensation that bordered the holy: There was a simply drawn jellyfish, with a quirky smile sketched onto it as it as it drifted through the empty space above the page's lettering: 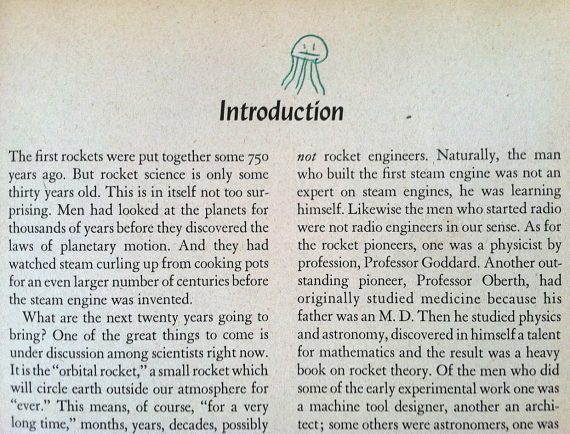 Certainly, in that moment of recognition, it was almost as if the young David Godwin had been sending a "wink" from the past, and one which he seemed to have known I would recognize as being purely unmistakable and singular in importance. Obviously, this entire circumstance would seem far more innocuous to anyone else, but my personal experience had been quite the jaw-dropping moment, indeed.

Incidentally, although I never knew Godwin in life, he did edit many of my articles that appeared in FATE Magazine over the years, and a number of years ago, I had even acquired a second hand copy of "Godwin's Cabalistic Encyclopedia", which I still have someplace in my library.

Thus, I almost can't help but feel a peculiar connection with David, even if we only managed to become acquainted through decades old inscriptions he left in books of his that I've acquired since his passing. As with most any other instance of synchronistic significance, the importance of any of this is obviously of a personal nature, and in likelihood, few others might have seen this inconsequential little coincidence as anything more than one of life's many amusing footnotes.

Be that as it may, it is nonetheless one that stands out in my mind, in addition to being among the more strange and hilarious synchronicities I've ever experienced.

Unicorn Woman Unusual But Not Unique