No, not Donald Trump. A large shark was caught in the Potomac River, the third such incident it three years. Have the enemies of the U.S. trained sharks to swim up the Potomac to the heart of American government and attack the Pentagon, Congress or even the White House?

The 8-foot-long bull shark was caught on September 3rd by commercial fisherman Robert T. Brown in the Potomac River in St. Mary’s County, Maryland, just 80 miles from Washington D.C. Brown and his son, fishing boat co-owner Robbie Brown, found the shark when they hauled in their nets. They say they’ve worked the Potomac and Chesapeake Bay for decades and have never seen a shark, according to Murphy Brown, Robbie’s daughter, who also works the boat when she’s not at her job at a defense contractor. Hmm. Does she know something more about this incident that she’s not revealing for security reasons?

This is actually the third time sharks have been caught swimming up the Potomac in three years, according to a report on the capture of two bull sharks in June 2015.

Is it time for the Pentagon to begin stocking the Potomac with trained military dolphins to protect the president and the rest of the U.S. government from enemy shark attacks?

If the military or the Secret Service can’t protect the president from sharks, maybe he needs to do the job himself by replacing his pet dogs with trained animals having a little more bite. Theodore Roosevelt had a badger, pound-for-pound one of the fiercest animals around. Calvin Coolidge had a pygmy hippo, although a full-sized hippo hiding in the Reflecting Pool might be a better shark deterrent. The Founders had some good ideas on this type of security. Thomas Jefferson had grizzly bear cubs and John Quincy Adams owned a pair of alligators given to him by Marquis de Lafayette, the French general who knew something about protection, having fought with the colonies during the Revolution.

The Maryland Department of Natural Resources claims it gets bull shark reports in the Potomac annually in the fall when its salinity is high. It had no comment on why there have been so many in the past three years.

Maybe the Secret Service needs to upgrade its training. 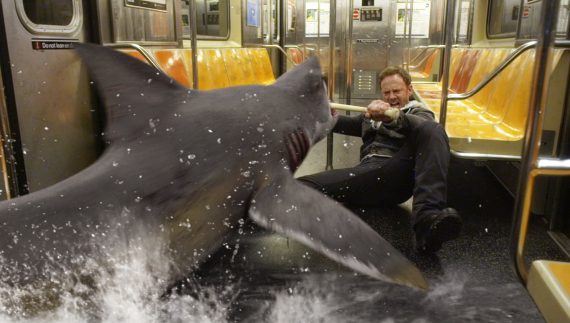 Bears are Rising Up Against Humans Around the World