On more than a few occasions I have been asked why it is I take an interest in such a certain, deeply weird, phenomenon; namely that of the so-called "British Bigfoot." After all, while it's not inconceivable that unknown ape-like animals could dwell in the forests of the United States, or on the slopes of the Himalayas, to suggest that such things might actually exist in the UK often results in shaking heads and rolling eyes. But, hell, I don't care. There are numerous reports of Sasquatch-style things in the UK, many of a strange yet intriguing nature. So, someone has to look into the matter, right? Right! And "look into the matter" I certainly have, and on dozens of occasions. But, how did it all begin? Well, like this...

From the summer of 1982 to the summer of 1985, along with three of my mates, I rented a large caravan in the Devon, England town of Brixham. One that was a true home from home, and where we had a lot of chaotic and uproarious fun. It was during this particular time period that I worked as a writer on a music, fashion and entertainment magazine that went by the moniker of Zero.

By the end of 1985, however, the job with Zero was gone, and it quickly became clear to me that I was now in dire need of money. The real world was unfortunately beckoning and I was very nearly broke. I really was at the point of checking down the sides of the settee and under the car seats in search of pennies. And so, I was soon working full-time as a van-driver and forklift driver for a company that sold paint, wallpaper, and related products. Of the very few 9-to-5 jobs I have ever had in my life, I enjoyed this one, as I was out of the boss’s hair, driving around, making deliveries to the house-painters of England, and all to the soundtrack of the BBC's Radio 1.

Practically every day, my long and winding route took me to the large and sprawling Staffordshire woodland known as the Cannock Chase. While out driving across the Chase, my mind often wandered back to those long gone days and nights as a monster-obsessed child. And, perhaps inevitably, to those exciting stories of the strange creatures that were said to inhabit the thick woods of the Cannock Chase. Indeed, even way back in the mid-1970s, as I very well knew, seemingly magical tales were quietly told by the local folk of the area of sightings of big-cats and even of the occasional wallaby or several on the loose deep within the dense, expansive woods.

Around this particular time my interest in all things weird slowly started to expand even more. As a direct result, I duly began to subscribe to some of the self-published newsletters on UFOs and paranormal phenomena that existed at the time – including the then-photocopied, fanzine-style periodical of Graham and Mark Birdsall’s Yorkshire UFO Society. It proved to be a very early precursor to their glossy, newsstand UFO Magazine of the 1990s and early 2000s. I also succeeded in finding a great little bookshop tucked away in a Birmingham side-street called Reader’s World that was a treasure trove for out of print and hard to find titles on just about all aspects of the paranormal. I even well remember picking up at Reader’s World a copy of Andy Collins’ very rare title, The Brentford Griffin, for an amazingly cheap sum. But, I digress.

It was not too long afterwards that my path first crossed with that of a certain beast, which - without doubt - ultimately led me on a path to uncover the truth of the British Bigfoot. Although somewhat appropriately for what was most certainly such a diabolical beast, it was not a good reason in the slightest. 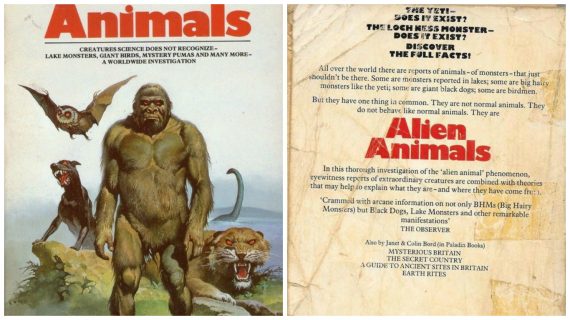 From a bookseller whose name has been lost to the inevitable fog of time, I had ordered a cheap, used, hardback copy of Janet and Colin Bord’s book Alien Animals - a classic and essential title that dug deep into the many worldwide legends and tales of ghostly black dogs, mysterious big cats, hairy man-beasts, winged monstrosities, and those unknown denizens of the deep, such as the Loch Ness Monster, Ogopogo, and a multitude of sea-serpents.

In January 1986, I still very well recall, Alien Animals finally arrived in the mail. I eagerly sat down to read it and was completely amazed to find mention of the infamous Man-Monkey. It was a bizarre, shining-eyed Bigfoot-type creature that I had never previously come across, but that the Bords said haunted Bridge 39 on the Shropshire Union Canal. This was of particular interest to me because the area, it so transpired, was actually very close to that of my daily van-driving route. My first exposure to the Man-Monkey was, however, firmly overshadowed by a far more ominous event that occurred on the very same day I began to read the book. It was the tragic and fatal explosion in the United States of the NASA Space Shuttle, Challenger.

And check out part-2 for the rest of the story.