If you took a survey asking which dinosaur people would most like to see in modern times, the answer would probably be the flying reptile (yes, it’s not really a dinosaur) known as the pterosaur. A video taken recently in Boise, Idaho, shows what looks like a pterosaur soaring across the sky. Have millions of wishes come true?

The defining characteristics of a pterosaur are a wide bat-like wingspan and a large backward-pointing crest. The creature in the video appears to have both. It flaps its wings, glides and does some sort of maneuver before flying out of sight. Is it real? A fake glider or kite? CGI?

There have been a number of alleged pterosaur sightings around the world. Texas and California are the states in the U.S. where some have occurred. In Texas, there were reports of pterosaurs in Harlingen in 1976, San Antonio in 1976 and Los Fresnos in !982. No photos were taken but three-toed, 8-inch tracks were found in Harlingen. Pterosaurs have also reportedly been seen in Kansas, Utah, Arizona and Ohio … and now Idaho.

As expected, there are many more pterosaur sightings in Africa and on remote Pacific islands. In 1923, natives in Zambia reported seeing what they called a kongamoto, which means "overwhelmer of boats," and said it looked just like drawings of pterosaurs. There have been many reports of pterosaurs in Papua New Guinea, where it’s called a ropen and has the unusual characteristic of glowing while flying.

Has some species of pterosaur survived extinction for 65 million years by hiding in the jungles of Africa or the forests of Idaho? Where are they? Are they sharing hiding places with thunderbirds? It’s difficult to judge the size and shape of birds, bats and gliding animals when seen in flight, especially at night. Does that explain every sighting of a pterosaur?

What do you think? Does the video from Idaho nudge your needle towards ‘yes’ or ‘no’? 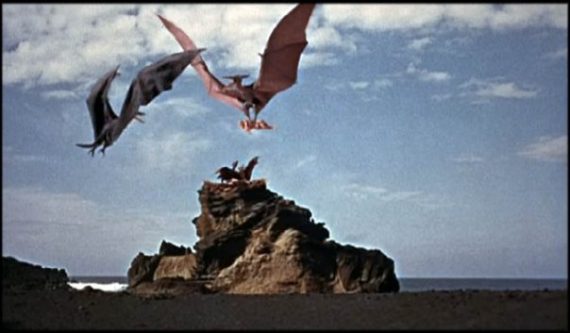 The Bizarre Beast(s) of Bodmin