Part-1 of this article introduced you to a varied body of people, places, and projects. We're talking about mysterious deaths, U.S. President Ronald Reagan's Strategic Defense Initiative ("Star Wars," as it became known), and the sinister and sometimes dangerous Djinn. They were issues that deeply concerned the late Gordon Creighton. For a long time, he was the editor of Flying Saucer Review magazine. Back in May 1989, I interviewed Creighton on these same issues. Specifically because he had briefly made his thoughts known on how all these things were allegedly inter-linked. It was quite an interview, to say the least.

According to Creighton, two things were going on. First, he was of the opinion that many of the "Marconi scientists" deaths were indeed due to suicide. However, he qualified this by adding that he felt the unfortunate individuals were driven to commit suicide via what, in simplistic fashion, has popularly become known as "Mind-Control." Creighton was open-minded on who the guilty parties may have been, but he suggested maybe the Russians - who would, of course, have had both a deep desire and a pressing need to derail "Star Wars." But, he said, the Russians weren't the only guilty parties.

There were, Creighton said, others that wanted to see the Strategic Defense Initiative extinct before it was even born. So Creighton said, those "others" were the Djinn. Rosemary Ellen Guiley says of the Djinn that they "...are born of smokeless fire (which in modern terms could be plasma). They live very long lives but they are not immortal. According to some accounts, they live with other supernatural beings in the Kaf, a mythical range of emerald mountains that encircles the Earth. In modern terms, they live in a parallel dimension."

As for why the Djinn wanted "Star Wars" terminated, it was all quite simple. Creighton assured me that while the Russians were a legitimate target of the SDI program, so was the intelligence behind the UFO phenomenon. It was a phenomenon, Creighton explained, which various government agencies (of more than a few nations) finally came to believe was not extraterrestrial, but Djinn-based - masquerading as ETs from the stars.

Of course, this begs an important question: if the Djinn exist as "plasma" and are the denizens of a dimension very different to our own reality, then how on earth could something like SDI cause them harm or death? Admittedly, Creighton was very hazy on this matter, but he suggested in concise words (maybe in too concise words) that the nature of the weapons-systems could "disrupt the Djinn form." How, exactly, was an issue that Creighton remained hazy on, citing equally hazy "sources," in response to my questions.

Things got even stranger. Creighton asserted that elements of British Intelligence, at the height of SDI research in the 1980s, secretly consulted with experts on the Djinn. It was something which allegedly led to contact with such creatures, and a form of "Faustian pact" between powerful figures here on Earth and the Djinn. The plan was to try and ensure a truce - albeit, probably, an uneasy truce - between the western world's military and the Djinn. The Djinn would agree to hold off on unleashing a "worldwide deception" and a "planetary invasion" if an agreement was made that SDI would not proceed. Western government's grudgingly agreed and were also forced to turn a blind eye to such things as Djinn-driven "alien abductions" and "cattle mutilations," added Creighton. 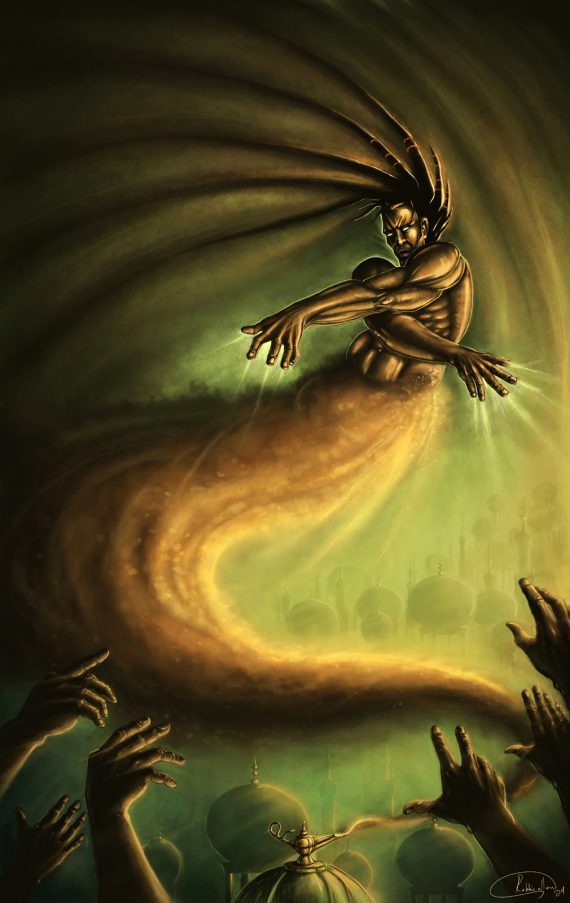 If you think things could not get any weirder, then you're wrong. Creighton made the astonishing claim that at least some of the Marconi deaths were the work of malevolent Djinn and also of British Intelligence - both seeking to ensure that the aims of the "pact" (the end of SDI) were achieved. Yes, it's quite a story, one involving Russian assassins, UK assassins, and even Djinn assassins! It's no wonder that 26 years after I interviewed Creighton, I still ponder on his story.

But, pondering on it doesn't mean it's the absolute truth. Or even anywhere near it. For example, assuming that Djinn are real, all-powerful, and manipulators of the Human Race, why would they even need to enter into some kind of Faustian agreement in the first place? Why not simply wipe out the SDI people directly and avoid any kind of "negotiation" with government officials? And, of course, the idea of Djinn and government officials "negotiating" on the SDI program sounds not just surreal but beyond surreal! And I remain extremely doubtful on Creighton's claim that the ultimately ill-fated SDI program had the ability to wipe out plasma-based entities from some completely different realm of existence.

In conclusion, I would have to say that Gordon Creighton clearly believed that the UFO phenomenon was Djinn-based. I have no doubt of that. To what extent his theories concerning SDI, the Marconi deaths, and the Djinn had any merit, however, is anyone's guess. The whole thing lacks verification, and the bulk of the story came from Creighton himself and from certain unnamed "sources." Maybe it was just a theory on his part and nothing else.

On the other hand, could there be a nugget or several of truth in Creighton's thoughts and conclusions? Maybe. Over the years I've heard a few, similar UFO-themed stories, but which substitute Djinn for demons. And I certainly don't dismiss some of those accounts. At the end of the day, however - and unless anything meaningful surfaces on this matter - the story remains very interesting, but highly controversial, and completely unproved. So far...