The “Blue Men” of Kentucky and Other Dermatological Oddities

In 1958, a strange thing happened at the University of Kentucky Hospital. Luke Combs, whose family had lived in the region for several generations, had brought his wife into the University Hospital for an examination. However, upon arriving, the doctors there were more interested in studying Luke than the ails his wife had been suffering, since Mr. Combs possessed skin with an odd, bluish hue all over his body.

Combs was one of many of the so-called "blue men" of Kentucky, originally stemming from the French Fugate family which produced several generations of men possessing skin with a strange, pale blue coloration throughout the 1800s.

The earliest known member of the family, Martin Fugate, had been a French orphan who settled in the Appalachian mountains of rural Kentucky near Troublesome Creek, where he met and was married to Elizabeth Smith. Fugate had arrived to claim a land grant, and Elizabeth's pale complexion and red hair, along with Fugate's own genetic recessive traits combined to produce progeny with a rare condition known today as methaemoglobinaemia (or more commonly "met-H"), a condition that causes a reduced ability to carry oxygenated blood throughout the body, resulting in the bluish coloration to the skin.

Although the trait was carried for several generations amidst members of the family, Combs' visit to the University of Kentucky in 1958 had been the first time the condition was officially documented and studied. More recently, Ben Stacy, a descendent of the Fugates born in 1975, had possessed this unusual bluish appearance at the time of his birth. Gradually with age, his skin took on a normal appearance, although his parents recall how his lips and other features would occasionally take on the bluish discoloration at various intervals throughout his youth.

Medical science has verified the cause behind this unusual condition, as well as its prevalence among the Fugates for several generations. The combination of recessive traits stemming all the way back to Martin and Elizabeth Fugate were, in fact, kept within a very narrow gene pool over the years as a result of inbreeding that occurred due to the general isolation of the family in the region where they settled.

Previously here at Mysterious Universe, I wrote about the mysterious occurrence of so-called "twin towns" in various places around the world, where an unusually high number of twin births seem to occur. Long believed to be the result of environmental effects such as minerals or other things present in the water supply, geneticists have managed to determine that in localized areas where inbreeding becomes more prevalent, the proliferation of recessive genetic traits is fostered, hence the continuation of certain traits which normally occur very little.

Similar to the twin town phenomenon, the Fugates of Kentucky had existed for generations in a similarly isolated rural area which had been conducive to interbreeding between individuals that possessed these otherwise recessive traits, and thus the otherwise unusual "blue skinned" appearance became a frequent occurrence.

However, there are other situations that can lead to the acquisition of a strange, smurf-like blue-skinned appearance. Paul Karason was one such individual, who made headlines after an appearance on the "Today" show, where he discussed having used colloidal silver to self-treat a health condition, which resulted in his skin turning blue. Karason subsequently died of a heart attack, with some media outlets suggesting a link between the use of colloidal silver and his untimely death at age 62. 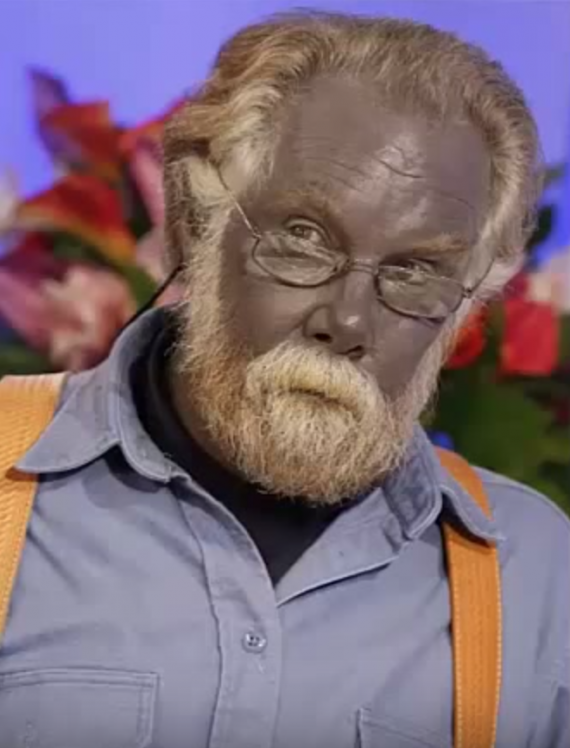 Some have noted that Karason hadn't truly been using colloidal silver at all, but instead a homemade concoction that had obviously posed health risks, as discussed here:

The fact is that Paul has a condition called argyria that turns the skin a blue-gray color. He got this condition by taking his homemade silver compound that was mostly a highly concentrated ionic silver solution. When he prepared the solution he believed he was making colloidal silver. He was not making colloidal silver. To make the solution even more dangerous, he added salt to the brew and then used electrolysis to make a high concentration of silver chloride with large particles which is well known to cause argyria. He further applied the compound to his skin causing him to become an internal and external photographic plate. To finish himself off, he used a tanning bed to "fix" the silver in his body.

In 1999, the FDA banned the use of colloidal silver in medicines sold over-the-counter due to its association with the argyria condition.

As genetic science shows us today, conditions like argyria remain among a handful of causes underlying why people may take on the bluish appearance of a "smurf." Whether carried along to progeny genetically, or acquired later in life as Karason had done, the blue discoloration is indeed very strange, though its cause is nonetheless well-understood.