The Curious Caper of the Charlton Crater, Pt. 1

It's an odd and near-surreal affair that occurred more than 50 years ago. And it's something that most of Ufology has forgotten about. It is, as the title of this article demonstrates, the curious caper of the Charlton Crater. It was the very early morning of July 16, 1963 when things began and that went on to attract significant attention for a couple of months. The location: Manor Farm, Charlton, Wiltshire, England. Leonard Joliffe was the man who kicked off the controversy: he claimed to have heard a loud explosion somewhere nearby, something which had him puzzled and worried. He was not the only person to suggest something weird was afoot.

A local policeman had seen something unknown and brightly lit crossing the skies over Charlton. Then, when darkness gave way to daylight, a man named Reginald Alexander discovered something not unlike a crater at Manor Farm, in a potato field. Something had seemingly crashed to Earth or landed. But what was it? A missile? An aircraft? A bomb? Or...might it have been a UFO? Alexander quickly told his boss, farm-owner Roy Blanchard, of what he had found. Blanchard was confronted by a circular area of flattened soil. It was roughly eight-feet in diameter, one-foot deep (and with a deeper depression in the center) and had "lines" coming out of it which created an impression of something resembling a huge bicycle wheel.

A worried Blanchard called the police. They quickly got the Army involved. In no time at all, a bomb-disposal squad was on the scene. So was the media. It was hardly the kind of morning that Blanchard was expecting! Things really took off when Blanchard gave the following statement to the excited press: "There isn't a trace of the potatoes and barley which were growing where the crater is now. No stalks. No leaves. No roots. The thing was heavy enough to crush rocks and stone to powder. I believe that we have received a visit from a spaceship from another world." 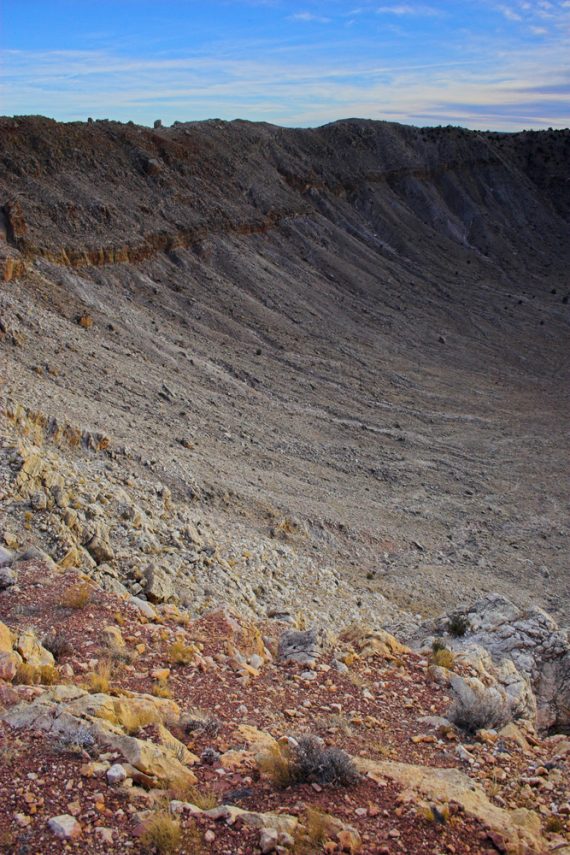 Captain John Rogers, of the bomb-disposal unit, had his say too: "There is no evidence of burn or scorch marks. And I could find no trace of an explosion. My superiors and I are baffled." The media was more than happy to share with its readers each and every aspect of the quickly growing puzzle. Things became more serious when the military announced they suspected there was something of significant size below the flattened soil. But what? Captain Rogers' team wondered if it was a German bomb, one which might have been dropped by the Nazis during a bombing mission at the height of the Second World War, but which failed to explode. Until now.

In no time at all, the military did find something deep in the soil. Not the remnants of a UFO or even a German bomb, however. It was a large piece of rock that had the military team suspect they had found a meteorite. It was not that, either. In fact - as staff from the British Museum were quickly able to confirm - it was nothing stranger than an example of ironstone, which is found all across the region. In other words, it had been there all along and was not the cause of the odd depression that so intrigued Roy Blanchard and the newspapers.

Given that there was nothing unusual below the spiral-like circle of depressed dirt (beyond ironstone, of course), the Army decided to say their goodbyes to both Manor Farm and the Charlton Crater. The Army's Southern Command made a statement for the media: "As far as we are concerned the matter is closed. It is not a bomb so it has nothing to do with us. The cause of the hole and its surrounding phenomena is still unexplained, but it is no part of the Army's task to unravel such mysteries."

That was an important issue. After all, even though it was determined there was nothing unknown beneath the soil, there was still the matter of what (or who) created that eight-foot-diameter circular depression. It wasn't long before an answer was forthcoming. It came from a man named John Southern. He was a TV repairman, from Middlesex, who said that he and a couple of buddies were the culprits.

As we'll see in part-2 of this article, however, John Southern's confession was full of holes - not quite as big as the Charlton Crater itself, but holes all the same. And, it was a confession that only deepened the mystery. For some, at least.