The forests and wild places of our world hold countless mysteries within their darkened recesses. Sometimes these are strange, natural phenomena, sometimes they are oddities of nature, mysterious creatures or locations, or haunted locales. On occasion, they are all of the above. One such place lies hidden away within the vast pine barrens of New Jersey, a land already steeped in enigmas, spooky folklore, the paranormal, and high strangeness as it is. Here among the trees is tucked away a curious body of water that is heavily pervaded by stories of the odd and bizarre, a supposedly bottomless pit of frigid water that is simultaneously a natural wonder, scientific oddity, lair of ghosts and cryptids, an alleged portal to other dimensions, and an overall creepy, cursed place long surrounded by sinister folklore.

Sprawled across the northeastern U.S., spanning all the way from New Jersey to Maine, is the vast sea of pines, shrubs and scrub known as the pine barrens. Deep within this rugged expanse of trees, in the pine barrens near Winslow, New Jersey, on the border of Camden and Gloucester Counties, among the thick pines and underbrush, lies a curious sight. It is a strange, nearly perfectly circular pool of frigid water approximately 130 feet across, which upon closer inspection proves to be almost completely clear, with azure water totally devoid of any vegetation living in it. It is a somewhat jarring sight considering that most of the ponds of the area are stagnant pools of murky brown water due to rotting vegetation, suspended sediment, cedar-fed waterways, and a high content of iron and tannic acid, yet this particular pool remains completely clear, its glass-like surface reflecting the sky to become a sapphire blue gem among the trees. This is the Blue Hole of New Jersey and although it may seem like an inviting place to swim on a hot summer day, its dark history and sinister reputation should make anyone think twice, as should its alternative name “The Devil’s Puddle.”

Native people of the region have long known of the Blue Hole. They believed it was formed from the tears of a woman crying over her unfaithful lover, and there was a great amount of lore attached to it, although it was seen as both a blessing and a curse. The waters here were supposedly endowed with certain medicinal qualities, yet these came at a risk, as the water was said to be the haunt of various evil spirits which jealously and violently guarded its secrets. Those who got too close to the water or were foolish enough to let their guard down were said to be seized by ghostly hands and dragged into the depths to never be seen again. Even the forest surrounding the hole was said to be prowled by various strange creatures and demonic spirits, which seemed somehow inexorably drawn to it.

As European settlement of the area began in the mid-18th century, the Blue Hole’s reputation became even more solidly entrenched as a place of high strangeness. Ghostly shapes were said to lurk near the hole and there were mysterious sudden patches of quicksand which would appear to swallow up people and even horses, only to vanish once again as if they had never been there. In the book Haunted New Jersey: Ghosts and Strange Phenomena of the Garden State, by Patricia A. Martinelli and Charles A. Stansfield, there is the story of how young women were said to be lured into the water by some mysterious, irresistible force, and would go on to live beneath the placid surface in “submarine splendor.” Other less pleasant stories told of young men and travelers being grasped by ghostly hands to be drawn down to their doom. The Blue Hole was also said to be a favorite haunt of the Jersey Devil, a strange creature frequently sighted stalking about within the pine barrens that is most commonly described as a bipedal, kangaroo-like entity with leathery wings, horns, a forked tail, and hooves. The Jersey Devil has allegedly terrorized the region for nearly 300 years, and stories tell of the Blue Hole being its favored stomping ground, perhaps even the portal through which it passes into our world from whatever hell it emanates from as there have been accounts that describe seeing the creature actually entering and exiting the hole. This reputation as a hostile, accursed place discouraged settlement of the immediate vicinity of the Blue Hole, and these early settlers gave it a wide berth.

Although the area experienced somewhat of a positive image in the 1930s as a popular picnic spot, the bizarre stories continued in the wake of a storm which demolished the bridge that had served as the main access route and regulated it to an isolated, remote area accessible only by foot trail. Once again the Blue Hole quickly regained its ominous reputation, which has continued up to today. There are many tales and phenomena associated with the Blue Hole. It is still seen as a favored stomping ground of the Jersey Devil, and some locals see it as the portal to Hell itself. In recent times, the hole has been the location of several mysterious drownings and those who have managed to swim there and live to tell of it have often reported feeling cold hands grasping and clawing at them or dragging them around the surface like a rag doll. Some have described being scratched or bitten by something stirring below. There have allegedly been bodies of the drowned found floating at the surface which have exhibited strange or even horrific wounds such as various scratches along their legs or arms and in one case supposedly a broken neck and missing eye.

There are also many reports of mysterious flashes of light like lightning from something deep down within the water, flickering orbs or shadowy shapes flitting about under the surface, inexplicable noises rising from the depths, and rogue whirlpools that move about the hole almost as if actively searching for people to drag down. The surrounding wilderness is said to be prowled by ghosts and other strange apparitions which keep the Jersey Devil company. On top of all this is the eerie, almost suffocating blanket of silence that seems to hang over the area, with the sounds of animals and birds either completely absent or somewhat muted as if being heard from another room. Sometimes the only sounds to be heard within the stifling silence that seems to blanket the area are the sudden, jarring booms of gun blasts from the nearby firing range. With this decidedly creepy reputation and atmosphere, it is perhaps no wonder that locals tend to stay away from the Blue Hole, and visitors are mostly thrill seekers looking for some glimpse of the strange or macabre. 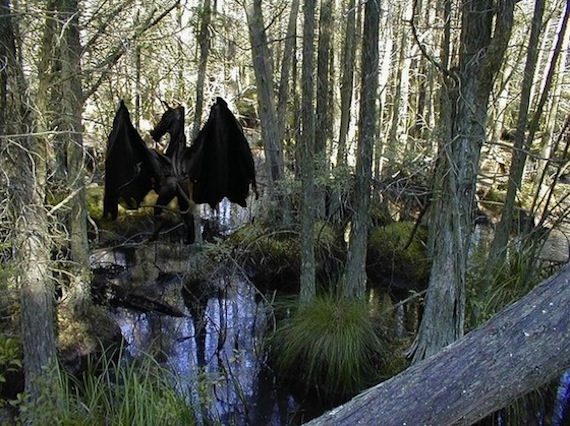 There are other mysteries here as well. The Blue Hole is said to be bottomless, a claim somewhat bolstered by the fact that lines that have been dropped into it to gauge its depths have failed to reach a bottom, perhaps because it stretches and winds underground all the way to the ocean, or if you believe some of the locals because it is a doorway to another realm. There is also the odd, almost mystical appearance of the hole. There is no vegetation, no fish, no insects, no sign of life whatsoever stirring within the clear water, which lends it a somewhat unsettling atmosphere and gives it the air of a sterile, inhospitable void, despite its somewhat charming blue, peaceful water. It is also unknown just exactly how the pool manages to remain so perfectly clear, or why it stays at a nearly constant temperature of 58 degrees even during the brutally hot summers of the area. It is thought that this could be because the hole is fed by groundwater rather than the nearby stream, and that this cold water is somehow filtered through rock, resulting in the clarity. This could also account for the strange whirlpools said to appear upon the otherwise tranquil surface, with the influx of groundwater perhaps creating a current within the pool, but none of this is really known for sure. In fact, it is not even really understood just how the hole was formed in the first place, with explanations ranging from a meteorite strike to some sort of sinkhole.

The mysteries of New Jersey’s Blue Hole, both natural and paranormal, seem to go as deep as the hole itself. What is it? What is going on with this remote, little known spot? Why is so much strangeness drawn here? Can all of this be explained with rational, scientific answers, or is there something more mysterious at work here? Until we know for sure, the Blue Hole will continue to remain an enigma, its glassy, inviting surface cloaked in mystery and strangeness and its azure depths just as perplexing as they have always been.