Greetings, and welcome.  I want to play a game.

There are some people for whom those words cause a chill, from the bottom of their spine all the way up to those little hairs on the back of their neck.  Those words, of course, are part of the infamous dialogue from the Saw movie franchise (2003 – 2013).  Saw being only one title among more than a dozen slasher movie franchises in recent years to adopt a house of horrors type of setting.  It seems to provide an effective backdrop for the moral questions the writers and directors of such films want to explore.  But more than that, it provides the means to consistently scare the bejesus out of movie goers.

From classic films such as Cube (1997), and Hostel (2005), and The Collector (2009), and even House on Haunted Hill (1959/1999), the idea that one could become trapped in an environment that had been carefully designed – sadistically, deliberately – to torture, maim, and slowly kill anyone who found themselves inside is by no means a new tool in the kits of horror writers, but it is effective.  But those are movies, right?  No one could ever do such a thing in real life?  Could they? 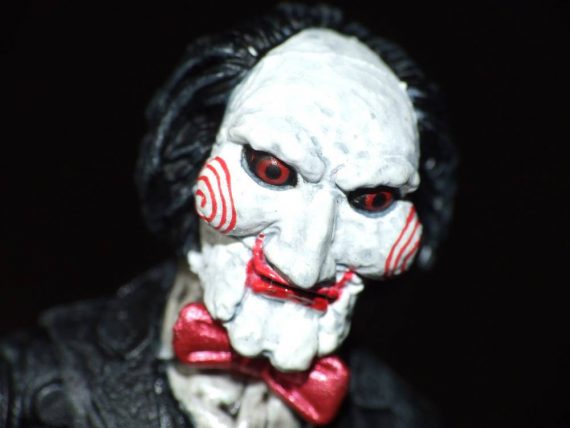 Dear reader, I give you H.H. Holmes.

Born Herman Webster Mudgett in Gilmanton, New Hampshire in 1861, Holmes has gone down in history as America’s first, and possibly most prolific serial killer ever.  But there’s far more to him than that.  An MD, a pharmacist, a philanderer, a polygamist, a criminal mastermind, a fraudster, a sadist, and a murderer.  But even that does no justice to just how cruel and devious this man was.

You see, Holmes – also known as Henry W. Howard, Dr. Henry Howard Holmes, Dr. Death, and The Devil in the White City – could righty be said to have been the inspiration for the entire house of horrors movie genre.

In August of 1886, while living in Chicago, Holmes procured a job as a druggist in the pharmacy of the soon to be widowed Dr. Elizabeth S. Holton.  Upon the death of her husband, Holmes arranged to purchase the operation from Mrs. Holton, putting himself into a great deal of debt.  Soon after, he purchased the plot of land located across the street from the drug store and built on it what would later be known as his Murder Castle.  It was in fact a hostel, the World’s Fair Hotel, though it was anything but a welcoming inn.

You see, in 1893, Chicago hosted the World’s Columbian Exposition (an iteration of the World’s Fair), welcoming some twenty-seven million visitors over its seven months of operation.  Which provided perfect conditions for the predator among them.

Construction of the hotel was a fractured and disjointed affair; Holmes regularly fired his various crews then hired others, ensuring that he alone was completely familiar with the building’s finer details.  For those details would prove damning.  In a manner reminiscent of California’s Winchester Mansion, Holmes castle was riddled with secret passages, stairs that lead nowhere, doors that opened to brick walls, or that didn’t open at all.  As well as windowless rooms, trap-doors, and secret viewing ports.  It was a literal fun-house, but without any of the fun.

His scheme, which was a crime he’d invented and perfected while in medical school using fresh cadavers, was to trap, murder, and dispose of people for whom he could later collect life insurance payments.  And apparently it was a scheme that worked well.  The entire second floor of his hotel had been sealed off to the outside world.  Each room was equipped with a different means to murder its unsuspecting occupants.  Hidden gas lines for suffocation; steel plate walls with blow torches on the backside to broil those inside; a lynching room; and even an air-tight, soundproof vault next to his personal office, in which he would simply let guests expire and rot.  His victims were often his own female employees; women who were required to take out life insurance policies, for which Holmes would pay the premium in exchange for being listed as the beneficiary.

Once he’d dispatched his victim, he, or his lackey – a carpenter named Benjamin Pitezel with whom Holmes had become friends during construction of the building, and whom was a notorious criminal in the Chicago underworld – would drop the bodies through a secret chute to the basement for dissection, or dismemberment, or to simply be buried in lime pits dug into the basement floor.

Ever the creative entrepreneur, Holmes even stripped and prepared the skeletons of some victims, selling them as demonstration models to medical schools and other contacts he made during his collegiate career.

The official count of his victims is a meagre nine people, though this is only because he took such care in disposing of the bodies.  With the massive number of tourists passing through Chicago for the fair in 1893, the likelihood that his house of horrors saw in excess of two hundred victims is high.  He confessed, at different times, to as many as twenty-nine murders, including that of his accomplice Pitezel while living in Philadelphia, and three of Pitezel’s children, and one of his own wives.  But in the end he was convicted on only a single count, for the death of Benjamin Pitezel, and sentenced to death.  He was hanged on May 7, 1896 in Philadelphia, but not before selling his story, and alternate confessions to news outlets for at least $7,500.00US ($212,610.00 today).

Interestingly, his great-great-great-grandson, Jeff Mudgett (from Holmes’ first marriage to Clara Lovering, whom he abandoned) published a book titled Bloodstains (2011), claiming that Holmes’ career as a murderous villain was a good deal more infamous than has been stated.  The junior Mudgett claims (somewhat spuriously) that H.H. Holmes was in fact the real identity of London, England’s Jack the Ripper.

As with any other suspect in the Ripper case, there is no physical evidence tying Holmes to the murders of four prostitutes in the Whitechapel district of East London between August and November of 1888.   But it remains possible; the timing would be right; he was a man of means and could easily have travelled to England by steamship (though there’s no record of him ever having left the US), and he was a trained doctor; and the profile of the Ripper’s victims matches his own, superficially at least.

Following Holmes’ arrest, the multiple investigations – which were centered on his fraudulent dealings with several insurance companies, his involvement in the disappearances (murders) of the Pitezel children, and the many suspicious deaths and human remains found at his murder castle – police made public the truly heinous nature of this man’s life.  The search of the World’s Fair Hotel uncovered piles of soiled and bloodied clothing, large balls of carefully wound blonde hair, the unidentified bones of children, and teeth from a wide range of possible victims.  In the end, the building was burned to the ground by arsonists.  Some say it was to cover yet more evidence of crimes associated with the building, but others say it was done to cleanse the neighbourhood of the evil H.H. Holmes wrought upon it.

Whatever name you might know him by, Herman Mudgett, Henry Howard, H.H. Holmes, Doctor Death, or even Jack the Ripper, it’s clear that America’s first serial killer deserves the title Monster.