The Waking Nightmare: Can Dreams Extend Into Our Waking Reality?

"A common, although insufficiently well-known, psychological syndrome rather like alien abduction is called sleep paralysis. Many people experience it. It happens in that twilight world between being fully awake and fully asleep. For a few minutes, maybe longer, you’re immobile and acutely anxious. You feel wait on your chest as if some being is sitting or lying there. Your heartbeat is quick, your breathing labored. You may experience auditory or visual hallucinations–of people, demons, ghosts, animals, or birds."

Thus had been the late Carl Sagan's summary of the sleep paralysis experience, as related in his masterfully written 1995 book, The Demon-Haunted World, a skeptically driven examination of UFO reports and other related claims which fall into categories of experience that are generally considered "paranormal." 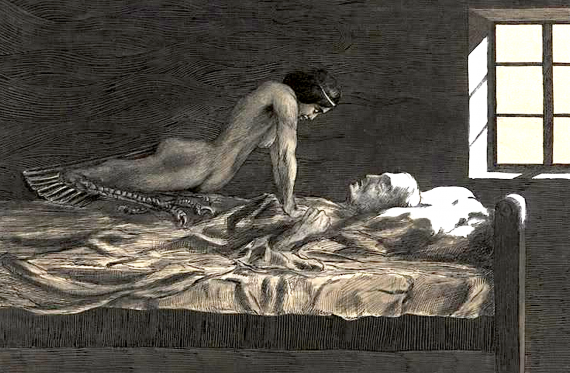 However, much has changed in the two decades since Sagan's book was published, and while perhaps "insufficiently well-known" at the time he wrote it, sleep paralysis is far better recognized today. Brian A. Sharpless, Ph.D; M.A, Assistant Professor of Psychology at Washington State University, recently covered sleep paralysis in an article for the Independent, noting that while the condition is well known and has been studied, "there are currently no well-validated treatment options."

"However,", Sharpless writes, "certain drugs that suppress rapid eye movement (REM) sleep (e.g., antidepressants) and forms of psychotherapy may be helpful. Further, just learning what sleep paralysis is, that it is not uncommon, and that it is not physically harmful can help people to feel better."

Sharpless, along with co-author Karl Doghramji, M.D of Thomas Jefferson University, recently collaborated in the authorship of Sleep Paralysis: Historical, Psychological, and Medical Perspectives (Oxford University Press). They aren't the first among academics to weigh in on the subject; for a number of years, David J. Hufford, Ph.D. has sought to explore the relationship between sleep paralysis reports, and cultural beliefs among those who experience it. And of course, as we observed at the outset, Carl Sagan similarly evoked sleep paralysis in his probing inquiries into why humans believe in things such as contact with beings from other worlds.

Like the aforementioned researchers, sleep paralysis is something which has remained fascinating to me for some time as well, though admittedly, I bristle at the way some have sought to use it as a convenient explanation for virtually all purported supernatural phenomena; these range from purported ghost encounters, to alien abductions, as Sagan surmised. Often, I feel such broad conclusions are made without actually looking at all the relevant data, nor seeking to understand whether sleep paralysis is truly a good fit for all the varieties of nighttime encounters that people report having. There may, in fact, be other neurological phenomena, or other conditions innate to the body of the experiencer, which might trigger such things. Alternatively, it could be the case, though perhaps less likely, that some people experience a variety of genuine, external phenomenon, which has nothing to do with internal bodily chemistry at all.

I often wonder about this as it relates to people's descriptions of "dreams" which seem to spill over into the waking reality. To be clear, I differentiate such "dreams" from sleep paralysis in that the body does not appear to be incapable of moving, but seemingly hallucinatory visual occurrences exist nonetheless. In some of these instances, the experiencers even seem to interact with the "presences" they encounter, and at times may claim to have audible exchanges with them. 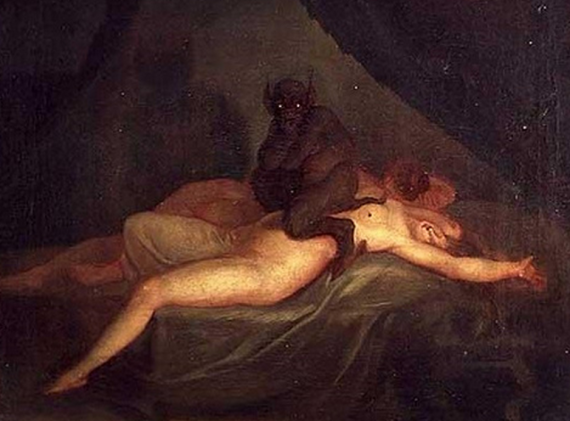 Generally, medical science would seek to classify such experiences as sensory misrepresentations of various stimuli, or purely hallucinations induced by the dreaming mind that may occur in rare circumstances as an individual is emerging from a deep sleep (the latter, actually, seems quite likely). However, occasionally there are stories I have had people share with me are truly unusual, perhaps bordering the otherworldly.

One such story, related to me by a young man several years ago, began just like any other episode of sleep paralysis (something which, I will note here, he explained to me beforehand that he had experienced many times before). What follows is his description of the encounter:

I woke up and immediately realized that my body was completely paralyzed as usual. I tried to relax, as I usually do, and go back to sleep, but something really weird happened, three entities just materialized in front of me out of thin air.

Two of them had no distinguishable features, but the remaining one was terribly creepy. It had the most terrorizing white eyes I have ever seen, short white hair and a wrinkled face.

Anyway, this thing just climbed on my chest while the other two beings, who resembled shadow people, seized my arms with their hands.

Now, the third being had its knees on my chest which made breathing almost impossible. All of a sudden, it bent down and started to whisper things in my ear. I can't really recall everything it told me, but I do recall that it kept telling me that praying would not really save me at that moment (funny thing, I'm an atheist!) 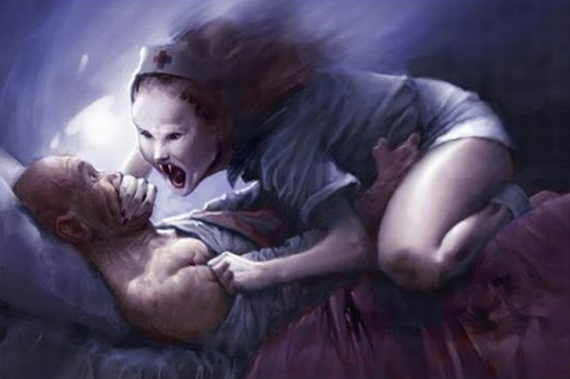 The man's paralysis would conclude with the entity that had climbed onto his chest attempting to kiss him, shortly after which he managed to awaken:

After I convinced myself that the entity present in my room was not a product of my imagination, I started to struggle to free myself of whatever was attacking me and then  I finally managed to break out of the paralysis and get up. As I did that, the three entities just walked out through the door which blasted open.

Obviously, I was still a bit overwhelmed and grasping for air, I checked the clock and noticed that it was around 6 am. For whatever reason, I decided to open my curtains thinking that the ordeal was finally over. However, when I opened them, I saw 3 little blue orbs of light and I immediately passed out; 3 hours later, I woke up on the floor.

Later, upon waking, the brother of the witness (who had been in the next room) asked if he had seen a strange shadow leave the room, which would have coincided with the strange paralysis experience.

A similar story was related to me by a man who had been suffering from depression around the time of his encounter. Like the man in the first experience, this individual explained that he, and his father too, had each had numerous sleep paralysis experiences.

The samurai raised an arm and pointed at him, telling the young man that there was a problem with the serotonin levels present in his brain. Needless to say, he found this disturbing, but having also suffered from depression around that time, soon afterward he and a family member went together for an evaluation. The psychiatrists he visited said they felt he may require mood enhancing drugs, namely SSRIs to help regulate, of all things, neurotransmitters in the body such as serotonin.

In psychology, such an experience might be interpreted as being the result of a hindsight bias, or in other words, a subconscious reevaluation of the dream which occurred after the diagnoses, in which the experiencer in this case might have inadvertently updated his dream experience, thus including information that seemed relevant to the subsequent diagnosis, but which had not actually been related at an earlier point in time. Interestingly, the individual in this instance shared the experience with his father after the dream occurred, and upon later review, his father too supported the sequence of events in which the sleep paralysis encounter related information that was supported afterward with a proper medical diagnosis.

A final recollection of something dreamlike or otherworldly which occurred after awakening was told to me during an exchange I was having with a friend on the subject. Her retelling of the curious incident is as follows:

I have seen things, since childhood.  Things that should, in the normal events of life, never be there. Sometimes I'm wide awake, and sometime in the borderland between fully wakeful, and asleep. Sometimes these entities seem benign, sometimes curious, and sometimes terrifying. One particularly harrowing experience I will recount for you here.

I had fallen asleep in my art studio on a small bed I have in there. I had been painting late as I am sometimes disposed to doing. This is an attic room, space and functional.  I woke in the dim pre-dawn light, to a gigantic visage of a Djinn.  It was huge, fearsome and threatening.  It encompassed the majority of the studio, beyond the small bed. It was, one huge green distorted face of a woman laughing, in a totally deranged and malevolent way.  I leaned up to focus, and for some reason I said, "I don't remember you".  She screeched, "You'd want to",  implying I'd better remember her.  The vision then faded, and I became aware enough of myself to realize, I was shaking uncontrollably.

Now, I have no awareness of  being in any dream prior to my waking.  If I was having a dream, I have no memories of it.  I also do not believe that I was experiencing any sleep paralysis, as I recall sort of pushing myself up on my elbows, in an effort to focus and try an figure out who or what was laughing so maniacally in my studio. I also have no idea why I refer to this entity as a Djinn, but on some level of knowing, that is what I immediately knew it to be.

I have never let myself fall asleep up there at night since. 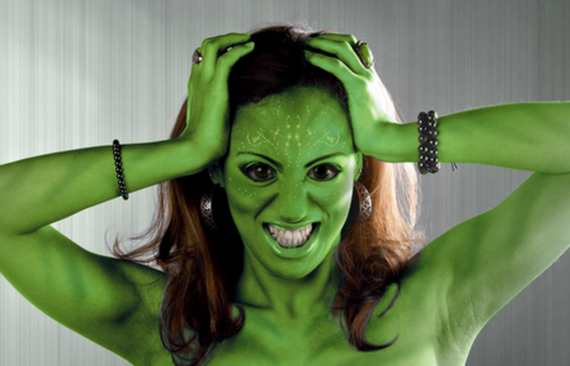 I don't think it's necessarily accurate, and certainly not fair, to say that people who have such experiences are suffering from the sudden, inexplicable onset of some psychotic episode. Yet this had been precisely the determination made by clinical practitioners who were visited by such people, in those years many decades ago when, as Sagan wrote in The Demon Haunted World, sleep paralysis remained "insufficiently well-known." Thus, as David J. Hufford Ph.D. related to me during an interview in 2009, often these people were prescribed antipsychotic medications for a condition which, only decades later, is well recognized, and hardly anything that is evidential of the onset of some mysterious psychosis.

Perhaps in another twenty years or so, our understanding of the dream and waking states will have sufficiently broadened enough that we will then understand the odd, liminal areas between the two. For it is here, during such periods where some report having dreams that spill over into the waking reality, and yet without the onset of the now well-recognized paralysis of the modern day.