Peter Beckman is, to put it mildly, a notable character. Having grown up in northern California, as a youngster he gravitated towards the arts and acting and was soon involved with local theater and production companies. In his early twenties, Peter attended the California Institute of Arts, where he studied screenwriting alongside Alexander Mackendrick, of The Man in the White Suit fame. His movie appearances include Chud II, Orson Welles’ unfinished The Other Side of the Wind, and Echo Park.

Beckman is the voice of General Wolf in the SyFy Channel’s series, Monster; he worked as a voice-artist on Street Fighter 4 and 5, and is the author of a highly entertaining paranormal-themed novel, Dead Hollywood. In addition, Beckman is the male voice in Josie Cotton’s recordings of Beyond the Valley of the Dolls, and Faster Pussycat, Kill! Kill! And, if like me you’re a big fan of the Ramones, you’ll be interested to know that Peter had a starring role in the video for the band’s 1983 single, Psycho Therapy, in which he receives a kicking in the head, courtesy of a psychotic punk-rocker!

Peter features significantly in my new book, Men in Black, in which he reveals his personal encounter with a pair of menacing MIB. In 2011, Peter told me: "I'm pretty much a regular listener to Coast to Coast and the night you were on I happened to be tuning in. I have always been fascinated by the MIB legend; I had read about Albert Bender. But I had never really connected it with the experience I had back in 1969 or 1970 - when I would have been about 20 or 21 - until you described a sequential series of events that are common, and you practically described what happened to me."

Peter continued that he and a friend, Stephen, "...were big movie fans and great fans of Roman Polanski's movies. We loved The Fearless Vampire Hunters, and Rosemary’s Baby. This night we were listening to the soundtrack to Rosemary's Baby by Krzysztof Komeda. As one of the tracks ended, I noticed a kind of change in the air, a shift, a weird shift. It was a change in the mood of the place. And then the black mass track came on. Then things really changed. It seemed to me like we were in my living-room, but also some place else."

Then, something even weirder happened, as Peter notes: "There was a knock at the door. I remember the knock at the front door. I don’t recall if it was me or Steve who said: 'Better let them in.' I opened it; we admitted two men into the house. After what we had just seen, in retrospect this seems amazing. They were pretty much as you described on Coast to Coast: they were dressed in square, Eisenhower-era cop-clothing, or FBI clothing – which in 1969, 1970 was not that unusual. They came in and sat on the couch. They were pale and sickly; their clothes hung real loose and they looked as though they might expire at any moment. They appeared to have either trouble breathing, or trouble even being. I don’t believe they said a thing. If they did, it has disappeared from memory. Very odd, indeed.

"I recall that, as I was waiting for them to speak, my mind was racing; should I try humor or invective? My general impression is that they were kind of confused, but just ever so slightly amused by the situation. It was as though they were waiting for us to speak. Their physical attitudes seemed to be waiting for some sort of answer, although no questions were asked. We were all waiting. This frightened me for an instant; then the whole scene felt absurd and humorous. After a couple of minutes, I started feeling funny about this, and I started saying something like: “Can we see some ID? Did someone send you? What are you really here for?” But this did not affect them at all. When I thought: 'I want them to leave,' they seemed to pick up on this, and did leave."

And as Peter also told me, they didn't just leave but vanished. As in literally. 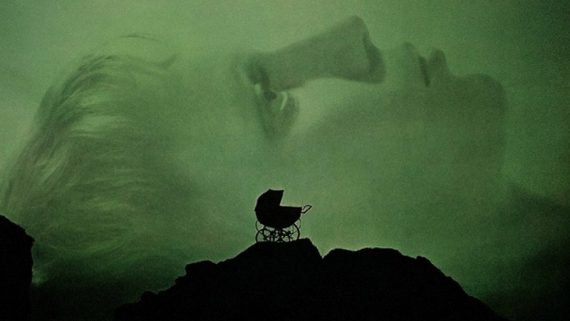 In part-2 of this article, we'll take a deeper look at Polanski's Rosemary's Baby and yet another weird case in which the movie plays a role, and which also involves dark-clothed figures appearing at the front-door...

World’s Ugliest Shark Caught Off the Coast of Scotland