Part-1 of this article introduced you to a man named Peter Beckman. An actor and voice-over artist, he had a strange and menacing encounter with a pair of very weird Men in Black more than forty years ago. His experience is told in full in my new book, Men in Black. To refresh you, here's what Peter told me. He said that he and a friend, Stephen, "...were big movie fans and great fans of Roman Polanski’s movies. We loved The Fearless Vampire Hunters, and Rosemary’s Baby. This night we were listening to the soundtrack to Rosemary’s Baby by Krzysztof Komeda. As one of the tracks ended, I noticed a kind of change in the air, a shift, a weird shift. It was a change in the mood of the place. And then the black mass track came on. Then things really changed. It seemed to me like we were in my living-room, but also some place else."

Then, something even more mysterious happened, as Peter noted to me: "There was a knock at the door. I remember the knock at the front door. I don’t recall if it was me or Steve who said: ‘Better let them in.’ I opened it; we admitted two men into the house. They were pretty much as you described on Coast to Coast: they were dressed in square, Eisenhower-era cop-clothing, or FBI clothing – which in 1969, 1970 was not that unusual. They came in and sat on the couch. They were pale and sickly; their clothes hung real loose and they looked as though they might expire at any moment. They appeared to have either trouble breathing, or trouble even being. I don’t believe they said a thing. If they did, it has disappeared from memory. Very odd, indeed."

The story - as you'll know from part-1 - got even stranger, with the MIB apparently having the ability to read Peter's mind and then finally vanishing - as in literally vanishing. All of which brings us to another case of a very similar nature in which the movie version of Rosemary's Baby plays a role. But, before we get to that, a bit of background on that famous, acclaimed movie.

Released in 1968, and directed by Roman Polanski, Rosemary's Baby is based upon the novel of the same name by Ira Levin, which was published one year earlier. The two key stars are actors Mia Farrow and John Cassavetes, who play a married couple, Guy and Rosemary. When they move into a new apartment, all goes well. Or, rather, it all goes well for a while. It's not long before things start to go menacingly wrong. Very wrong. We're talking about neighbors who are not what they appear to be, demonic activity, a secret group of satanists, and - at the heart of it all - terrified Rosemary, whose pregnancy becomes integral to the plot. If you haven't seen the movie - or read Levin's novel - I won't spoil the story by giving too much away. I will, however, say that Rosemary's Baby still retains its chilling atmosphere, nearly 50 years after it was made.

All of which brings us to the matter of part-2 of this article. As the following demonstrates, Peter Beckman and his friend, Stephen, were not the only ones involved in a strange situation related to Rosemary's Baby and strange, black-clad figures at the door. In December 2014, I extensively interviewed a woman named Alison (who I first spoke with in 2011), who had a very bizarre experience in a motel in Orange County, California, one year earlier, in 2010. At the time, Alison was in California on business. Her work was, and still is, in the field of acupuncture.

It was an hour or so before the witching-hour when a loud knock on the door of her room had Alison in a sudden state of fear. This was hardly surprising: it was late at night, the sky was dark, and she was in bed watching none other than Rosemary's Baby. She lay frozen for a few seconds, then got up and tiptoed to the door and looked through the spy-hole. She could see two young boys, dressed in black hoodies and black jeans. As if sensing that Alison was watching them, one asked, in a raised voice, if they could use the telephone. Particularly disturbing, both "boys" held their heads low, clearly making sure that Alison would not see their faces too well. 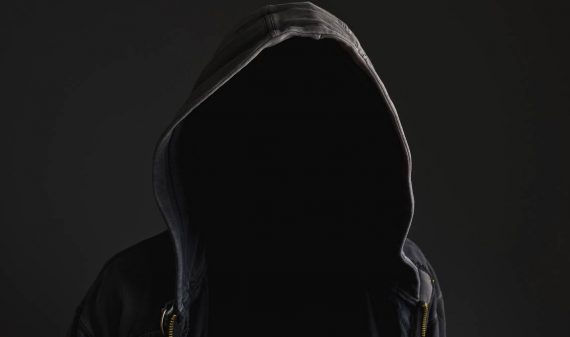 Alison was determined not to open the door, but she told me she felt weirdly compelled to do exactly that - as if her very own self-will was quickly being taken away from her. That was not a good sign. Alison, fortunately, managed to focus her mind and backed away from the door. As she did so, she instantly felt her mind return to normal, after which she tentatively moved closer to the door and peered through the spy-hole, yet again.

This time, the pair in black was staring up at her, with their faces prominent. Alison was instantly filled with terror by the sight of their completely black eyes and utterly milk-white skin. She screamed, ran for the phone, and called the night-manager. He was there in no time. The creepy kids, however, were gone. Alison, although she did not realize it at the time, had just had an experience with the notorious Black-Eyed Children, which David Weatherly describes in his excellent book of the same name.

Is it only a coincidence that Peter Beckman, his friend Stephen, and Alison all experienced strange and malevolent figures in black at the door, and in situations linked to Rosemary's Baby? I rather think it's not a coincidence. Peter and Stephen were listening to the soundtrack to the movie when the Men in Black appeared, and Alison was watching the movie itself when the "Children in Black" manifested. What this all means, I don't know. It would, however, be interesting to know how many more people may have experienced similar, weird phenomena while watching certain and specific movies of the supernatural variety. And particularly so Rosemary's Baby.