Beware of the Killer Pine Cones and Man-Eating Trees

They’re cute as Christmas decorations but a man in California is suing a national park for $5 million because a giant pine cone fell on his head and nearly killed him. Why would a tree drop such a huge seed on an unsuspecting human? Could it possibly be trying to catch him for dinner?

Sean Mace claims he was sitting under a Bunya pine tree (Araucaria bidwillii) in the San Francisco Maritime National Historical Park in October 2015, when the tree suddenly tree dropped a 16-pound pine cone on his head, knocking him unconscious.

Mace was rushed to San Francisco General Hospital where he was treated for a brain hemorrhage, which involved removing part of his skull. He now suffers from permanent brain damage and other physical problems, has hundreds of thousands of dollars in medical bills and needs more surgery. He’s suing the park service, the Federal government and anyone else his lawyer can think of for failing to warn park visitors about pine cones the size of bowling balls. What kind of tree grows these killer cones with huge spikes?

Bunya pines or false monkey puzzle trees are native to Australia where the pine cones, which can weigh up to 10 kg (22 pounds), are a popular food source and where people have sense enough not to sit under them. They were brought to the San Francisco park decades ago and have become well established there. What did this particular Bunya pine plan to do with poor unconscious Sean? Eat him?

That’s not as far-fetched as it sounds. There are tales of a Nubian tree from Egypt that used its huge fruit to lure animals and the occasional human into its grasping branches and blood-sucking leaves. An 1874 article in the South Australian Register tells of the Mkodo tribe of Madagascar that gave human sacrifices to a local man-eating tree. A legend from Nicaragua tells of the “devil's snare” or vampire vine that wrapped itself around its prey to strangle it and suck its blood.

Are the Bunya pines of California evolving into man-eating killers? If so, the park will need a better sign. 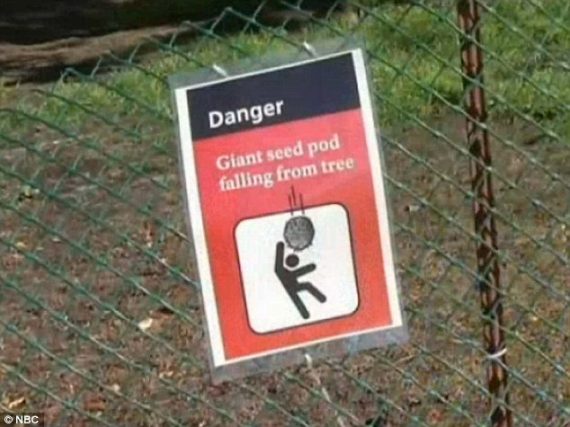