Ghosts of the Living: Expanding Our Perspectives on Apparitions

In his later years, William Thomas Stead, the nineteenth century newspaper editor and renowned investigative journalist, had begun to have visions of what he believed would be his own death. He was certain, as he had confided to those closest to him, that his death would occur either as a result of hanging, or by drowning. At the age of 62, Stead set sail along with more than 2000 passengers on the maiden voyage of the British luxury passenger liner Titanic, and in what would be his final hours, he had been observed handing his life jacket to one of the ladies he had helped into the ship's lifeboats.

Perhaps even more strange had been that, with his apparent prescience about the notion of a drowning death, Stead had also written short stories that included scenarios detailing various accidents at sea, one of which even recounted a large passenger boat that struck an iceberg. The story, "From the Old World to the New", told of the rescue of survivors, though sadly, Stead's tale of survival would not change the outcome of his own grim premonition.

Apart from his own apparent visions of things to come, Stead had taken a more general interest in spiritualism in his later life. He was known to have held court with the likes of Arthur Conan Doyle, and following his death, Stead’s daughter Estelle published a few written works dealing with her father, throughout which she included a number of Stead’s observations about the spirit world.

Estelle's book "My Father" told of an instance where Stead discussed a friend of his, who he believed to possess the unique ability of “projecting her phantasmal double, sometimes voluntarily, and sometimes without any conscious exercise of volition.”

“It is by the aid of the double,” Stead had written, “and by automatic handwriting with living persons, that there seems to me the best chance of solving the abysmal mystery of personality.”

What Stead discussed of his friend in this instance appears to bear similarity to what, today, might be called bilocation, or the apparent ability of an object or individual to appear simultaneously in two separate locations. Stead went on to discuss the importance of bilocation in relation to the study of ghosts as follows:

"Ghosts of the dead are important, no doubt, but they are from the Other Side, and often seem to experience great difficulty in translating their thoughts into the language of earth, and not less difficulty in adjusting their fitful apparitions to the necessities of the psychical researcher.

"But with the double it is different, for there is no chasm to be bridged in its case between the living and the dead, and with automatic communications from the living, when all allowance has been made for disturbing influences, cross currents, and the intruding influence of the medium's consciousness, it affords by far the best clue to the mysterious, subconscious region in which most of the phenomena of the Borderland either arise or come into our knowledge.”

The conjecture here about purported "spirit doubles" proves little more about ghostly phenomenon than any such evidence of an anecdotal nature. What it does achieve, however, is that it offers us a phenomenon similar to that of purported ghostly manifestations, though without the key element that is often appended to ghostly apparitions: that they must be recognized as evidence "from beyond" of a deceased individual.

One could make the argument that these two phenomena—ghosts and bilocation—are entirely unrelated, as Stead himself assumed in the passage above. However, with Stead’s assessment, the reason for this distinction is clear: it was based upon the presumption that a ghost is the apparition of a dead person, and only a dead person, whereas a “double” is, in essence, the apparition of a living individual… but is this distinction truly a necessity? 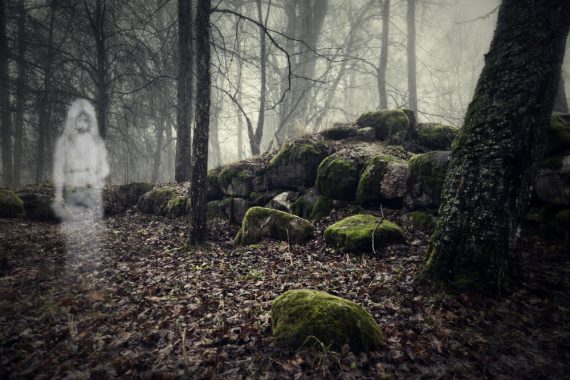 Perhaps not. I have often wondered about the fact that ghosts seemingly behave a lot like memories do, in that they each appear to behave like "imprints" of past events. I discussed recently in a separate article here at Mysterious Universe a thought experiment based on a sort of "premonition" that occurred in a recent episode of the British sci-fi series Doctor Who. Using the Doctor's premonition as a basis for the exercise, I wondered about whether premonitions could be more accurately likened to "memories of the future", which the Doctor notes can happen as a result of too much time travel. I went on to discuss the thermodynamic arrow of time, and the physical reasons why memory occurs the way it does, which had been outlined in Stephen Hawking's book A Brief History of Time (though admittedly, reading the original piece, which can be found here, will make more sense than the brief outline I've just given).

In essence, we don't remember the future because the way our brains store information obeys the universal laws of thermodynamics, and trend in the same "direction" in which entropy increases. We can perceive the present moment, and we can recall past events, but the creation of order in our temporal future exists beyond human perception. Rather interestingly, ghosts seem to behave in a very similar way to memories, in that they nearly always represent things that were, rather than things that are, or which are yet to be.

That's maybe not always the case, however, as we see with W.T. Stead's notion of a "double." While he made that distinction between a ghostly apparition and the apparitional double, perhaps there really is no need for distinction: maybe in the annals of literature pertaining to the supernatural, there really is as much precedent for the appearance of a "ghost" of a living person, as there is any purported ghost of a deceased individual. Most commonly, the idea of bilocation is found to be attributed to various saints, though occultist Aleister Crowley is also credited with the feat, though have achieved it unconsciously.

The broader point about a concept such as bilocation, as it relates to the subject of ghosts and apparitions, is one that begs a new perspective: has our idea about what a ghost is supposed to be--most commonly taken as the spirit of a deceased individual--really been a generalization all along, and perhaps one that is entirely incorrect?