Humanoid over Bratislava, Home of Nuke Plants and UFO Cafe

UFOs and flying humanoids have been seen frequently near nuclear plants – possibly to observe or protect humans from nuclear disaster. One was seen at a nuclear plant in Slovakia in 1992. This week, what appeared to be a flying humanoid was spotted and recorded over Bratislava, Slovakia. Was it heading towards one of the two active nuclear plants near Bratislava? Or was it looking to stop for dinner at the city’s famous UFO restaurant?

The flying humanoid or creature was seen at 6:30 pm in early October 2015. It appears to be hovering and moving slightly behind power lines. The person who uploaded the video called it a “creature with a tail” and swears it’s not a kite. So what is it and why is it in Bratislava?

[He described] the appearance of a flying object around the entrance gate of the plant. It was about 300 meters in diameter, triangular in form and hovering at an altitude of 500 meters.

The guard said he heard no sound. Later, other guards also reported seeing a UFO that landed outside the plant’s gate and left burn marks in the ground.

Slovakia currently has four operational nuclear reactors and a checkered past with nuclear safety. Two older reactors at Bohunice were shut down in 2006 and 2008 because they didn’t meet European safety standards. Could this flying humanoid be checking on safety issues at Bohunice?

Bratislava is also known for its UFO restaurant. 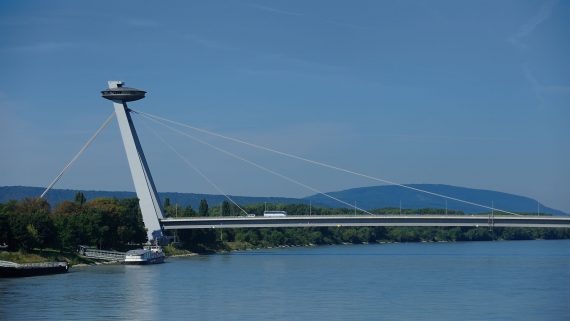 Located on top of the UFO Tower at one end of the Most SNP bridge over the river Danube, it’s appropriately named because it’s shaped like a flying saucer. UFO serves both Slovak and international cuisine and was named Restaurant of the Year in 2011. Did the flying humanoid hear about the UFO eatery on an intergalactic travel program?

Nouveau cuisine, nuclear plant or something else – what was this flying humanoid looking for over Bratislava?