Mysterious Space Junk Will Hit Earth on Friday the 13th

If we survive the Halloween asteroid that’s scheduled to have an extremely-close flyby while the kids are trick-or-treating, we may only have two weeks to wait until another possibly catastrophic event occurs on another scary day – Friday the 13th. That’s when a mysterious, supposedly man-made space object will plummet to Earth in the Indian Ocean not far from Sri Lanka. Should Sri Lankans be worried? Should we all be worried?

Let’s start with the mysterious part. NASA and the European Space Agency (ESA) are pretty confident the object is man-made but they have no idea who made it or what it is. The 7-foot-long object was first tracked in 2012 and just showed up again recently. Its elliptical orbit and movement suggest it’s hollow, which is why it’s thought to be man-made space junk. But from what?

Since the object is coming at Earth from beyond the moon, the first thought is that it’s part of a spacecraft from a moon mission, possibly even one of the Apollo flights from the 70s. While there’s all kinds of man-made debris in close Earth orbit, this is one of only 20 objects tracked by astronomers that’s in a distant orbit and – assuming it returns on Friday the 13th – will be the first to crash on its own and not induced by humans.

Will the object endanger Sri Lanka or neighboring countries? NASA and the ESA say no. Since it’s hollow, the object is expected to at least partially disintegrate upon re-entry and anything which remains intact will be small. In fact, the event is being promoted to astronomers as a great way to observe a space object whose path and point of impact have been so accurately predicted. 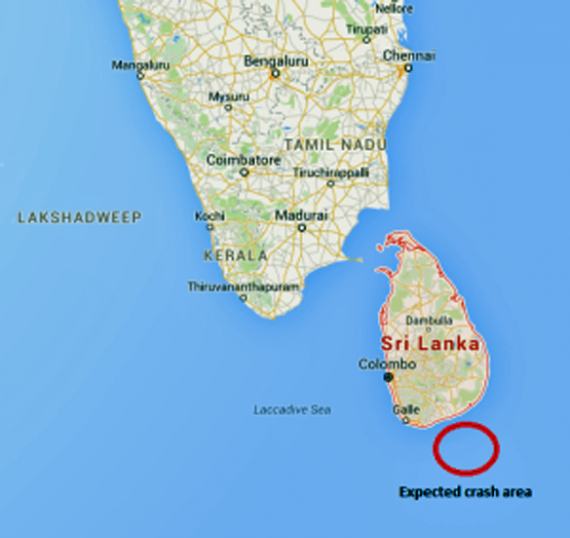 Assuming the predictions are accurate. If NASA and the ESA are so confident in their predictions, why did they name the object WTF1190F … as in What The [email protected]? Throw in the fact that the impact will occur on the THIRD Friday the 13th in 2015 and more than a few people are worried about this event.

Is a piece of space history coming back on Friday the 13th with a message? A warning? We’ll find out soon.