Our magnificent planet holds numerous wonders of the natural world, and there seem to be just as many of these below ground as there are above it. Deep down under the earth there stretch vast, dark subterranean worlds which have existed in the black quiet beneath our feet for millions of years separately from the light filled planet which we know. Here in the bowels of our planet are somewhat haunting domains that seem to be as bizarre and often as unexplored as another planet, and which can enchant us and capture our imaginations as much as anywhere upon our world or beyond. One such place exists beneath New Zealand. It is an awe inspiring cave world unlike any other, which was long known by the native Māori people, yet became known to the outside world in the late 19th century. It is a subterranean world of wonders, unique among its kind and with its own ecosystem and air of beauty. These are the Waitomo Caves.

Located in the southern Waikato region of the North Island of New Zealand, about 12 km northwest of Te Kuiti and a three hour drive from Auckland, amidst rolling green hills and not far from the 78,000 hectare Pureora Forest Park, one of the largest intact tracts of native forest in the North Island with its magical vistas of tall, ancient trees, there is a place called Waitomo. The name derives from the Māori words wai, which means “water” and tomo, meaning “hole” or “shaft,” and denotes a vast area of limestone composed of fossilized corals, seashells, fish skeletons, and other small marine organisms, and dotted with over 300 known caves with likely many more which have yet to be discovered. Stretching out under the picturesque countryside there is a sprawling network of caves, sinkholes and underground rivers, which were carved into the limestone over millennia by subterranean streams and have long had a prominent place in Māori folklore.

Although the caves have been known by the native people since time unremembered, it was not until 1887 that any formal exploration of their dark recesses was launched. It was at this time that a local Māori Chief by the name of Tane Tinorau joined an English surveyor, Fred Mace, to take a journey down into a mysterious murky world full of ancient Māori magic and spirits where few had ever dared to delve. These two brave explorers embarked on their expedition into this lost underground world on a simple canoe upon a stream that led down into the caves, pushing away the envelope of blackness with candles. As this candlelit cruise into the unknown meandered its way along the underground stream, the two explorers floated past an otherworldly realm of ornate stalactites and stalagmites, many of which twisted together to form columns, and amazing limestone formations the like of which they had never seen, before drifting through a vast cavern which flickered with a multitude of pinpoints of light along the ceiling like a sea of stars in the night sky. This was caused by the endemic New Zealand glowworms, which are a species of fungus gnat whose larvae are bioluminescent and which inhabit wet caves, and indeed this particular cavern would go on to be known as Glowworm Grotto. The explorers were so astounded and mesmerized by their almost mystical journey that they subsequently made several more trips to the cave, both together and independently, and during one of these excursions Chief Tinorau would discover the upper entrance to the cave, which is the entrance most commonly used today. By 1889, Tinorau and his wife Huti had opened the caves to visitors, and guided them through the underground realm for a fee until the government acquired administration of the caves in 1906. 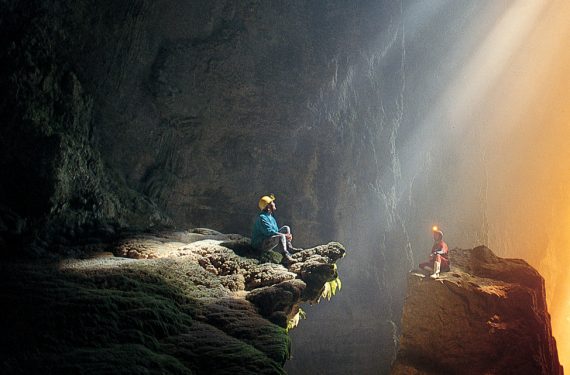 The Waitomo caves themselves form an impressive labyrinth of interconnected caverns, tunnels, and caves, thought to spread out into the earth for hundreds of miles, with the main caves being the ones called the Waitomo Glowworm Caves, Ruakuri Cave, Aranui Cave, and Gardner's Gut, which is all accessed via a main entrance that appears merely as a narrow crack shrouded by trees that would be easy to miss. This unassuming entrance leads down into a vertical drop through a subterranean gorge called the Tomo, which is the remnant of an ancient waterfall with walls dotted by ferns and a type of flowering cave fungus clinging to the walls basking in shafts of sunlight, and patrolled by numerous insect species including albino cave ants and the weta, a large cricket-like insect some species of which are among the largest and heaviest insects in the world, and undoubtedly many species as yet unknown to science. 16 meters below past the sheer limestone walls, at the moss covered bottom of the gorge is the underground Waitomo River, which gushes forth from the inky blackness of the caves only to flow past and continue on into the murk beyond. There is also an area here called the Banquet Chamber, where guests during the early days of cave exploration would stop and prepare meals, as is evidenced from the smoke stains on the ceiling, as well as a large, enclosed 18 meter-high chamber which is known as The Cathedral.

Here in this dark domain, branching out from the narrow beams of sunlight piercing down to fight the darkness from above are the Waitomo Caves, and there are many natural wonders on display here. Meandering through tunnels of rock is the underground river and its streams which diverge off of it to swirl into the gloom, collectively referred to as “the black water,” with some of these waterways leading down into subterranean depths and passageways that have never been explored or even seen by the eyes of mankind. In some areas there are underground lakes as well, untouched for eons, and there are numerous limestone formations of all shapes and sizes throughout the cave system and of course looming beside the dark river.

If one follows one stretch of this black water river they will come to perhaps the most famous attraction of the cave, the Glowworm Grotto. Here, stretching across the rocky ceiling over the inky water below, are glittering constellations of tiny blue-green lights that are caused by the endemic New Zealand glowworm (Arachnocampa luminosa), which are about the size of a mosquito and create dazzling displays of bioluminescence that are the only illumination interrupting the otherwise impenetrable, total darkness here. A scientific advisory group carefully monitors and guards these glowworms, constantly measuring the humidity, temperature, and carbon dioxide levels and using this data to decide how many visitors should be allowed per day or if the air flow of the cave needs to be adjusted in order to maintain the cave’s delicate ecosystem.

With its natural magnificence and air of mystery and adventure, the Waitomo caves have been a very popular cave tourism destination since the late 1800s, when Chief Tane Tinorau first started guiding visitors here, and the number of tour companies offering cave adventure tours has increased significantly right up into the modern day. These tours come in all sorts of flavors to suit everyone from the casual caver out for a leisurely stroll or slow and relaxing boat ride, to the more extreme hardcore spelunkers who come to scramble over limestone formations, crawl through obscure passages, rappel down yawning chasms, zip-line through caverns, or bounce and shoot down narrow tunnels of underground black water rapids wearing a rubber tube. There is also much to see here above ground, including charming scenic views, plenty of hiking trails, and such landmarks as Marokopa Falls, the limestone Mangapahoe Natural Bridge, and even the Hobbiton set from the fantasy Lord of the Rings films.

The Waitomo area is surely a wondrous sight to behold, both above ground and below. It is an alluring place with a unique underground cave world which reminds us that one of our last great frontiers on Earth is the realm below us. This is a place which still holds as much awe and wonder as it must have had when the first explorers here set upon the black water by flickering candlelight. With countless passages still left to be explored and hidden from the eyes of mankind here in the darkness and in the glimmering ethereal glow of the glowworms, there are surely still amazing discoveries left to be made in the Waitomo caves, and surely enough to keep our spirit of exploration pushing forth into their mysteries.

UFOs Seen at Air Shows and Flying with Military Aircraft