Peculiar Projects of the Pigeon Kind

Just one year before the dawning of the 21st Century, Britain's domestic intelligence agency, MI5, released an extraordinary batch of documents. They told an equally extraordinary story. It was a story that dated back to the Second World War. As the British equivalent of the United States' FBI, MI5 became deeply concerned when intelligence data gathered overseas suggested the Nazis were secretly training pigeons - in France, Holland, and elsewhere - for certain espionage operations. That's right: feathery 007's. Whether or not they had their very own equivalents of martinis shaken and not stirred remains unknown. Presumably, MI5 considers that to be a still-highly-classified matter.

The plan was a complex one: the "pigeon agents" would have coded messages strapped to their bodies and would make their way to specific locations in the UK. They were locations where German spies were hiding out and awaiting orders from Hitler's cronies. Faced with the possibility of squadrons of winged secret-agents doing the work of Adolf Hitler, MI5 went one step better. They hit back in fine style by hiring falcon-breeders to turn the tables on the Nazis and have the falcons take out the pigeons.

MI5 files suggest, however, that there was far more rumor than reality to this dastardly plot. Indeed, MI5 said of the rumors: "For this purpose we started a Falconry Unit, with two falconers and trained falcons. Whilst they never brought down an enemy bird (probably because there never were any) they did demonstrate that they could bring down any pigeons that crossed the area they were patrolling - about two miles in diameter." In its conclusions, MI5 said: "It is felt that there is no need for any permanent section to cover this, but that the loft of some reliable civilian could be earmarked and subsidised for the purpose. An expert pigeon officer with experience in the use of pigeons for intelligence work could be paid a retaining fee for his services when required. In this way a thread of continuity would be kept going."

This was not, however, the only occasion upon which pigeons have played curious roles in warfare and espionage. Burrhus Frederic Skinner was a psychologist and inventor and, from the latter part of the 1950s to the mid-1970s, a professor of psychology at Harvard University. During the Second World War, however, Skinner was tasked with teaching pigeons to go into battle for Uncle Sam. The operation was known as Project Pigeon - what else? It was ingenious. On paper, at least. In reality, however, things didn't go down too well.

Admittedly, the idea was a good one (although, unfortunately, not for the pigeons). It involved placing a trio of pigeons into a guided missile, launching the missile, and then having the pigeons peck the specific part of an on-board screen which displayed the images of whichever target needed to be destroyed. On top of that, the birds would have cables attached to their heads to help them steer the missiles. As for how the pigeons got to see the images, they came from a front-loaded camera that filmed the landscape below. Well, having the pigeons guide the missiles by beak-power was all fine, except for one thing. As the National Defense Research Committee noted, the pigeons couldn't keep their minds on the task in-hand. Or in-beak. The result: they would peck the screen at random, ensuring the missile would fly wildly out of control and crash. A case of RIP: rest in pigeon.

Moving on a few years, in 1952 the U.S. Army secretly looked into the matter of teaching dogs to search for deadly landmines on battlefields. The strangest aspect of the program was that it would explore the feasibility of the dogs using extra-sensory perception (ESP) to find the landmines! The Army contracted Dr. Joseph Banks Rhine, PhD, to come on-board. The operation progressed quickly. According to the documentation - which has been released under the terms of the Freedom of Information Act - two dogs in particular, named Tessie and Binnie, scored very well. 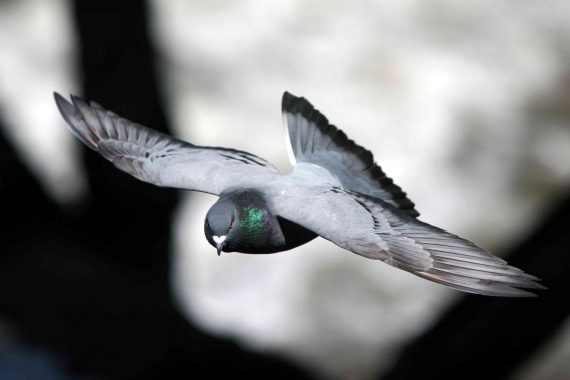 Rhine also suggested to the Army that pigeons might be good candidates for certain, tricky operations of the military and espionage type. The official records contain Rhine's own words on this intriguing issue. He said: "The mystery of pigeon-homing and the possibility that extrasensory perception enters into that performance led us to undertake the solution of the problem of how these pigeons find their way home. At the termination of the contract the problem had not been solved."

Rhine added, however, that regarding the matter of pigeon-homing: "...researchers have ruled out all existing sensory hypotheses, thereby making extrasensory perception a more plausible interpretation than it has been hitherto. This research has opened up possibilities of importance not only within but far beyond the scope of the projects specifically dealt with. The problems raised on this project involve basic research that may remain in the category of the inapplicable for many years. Measured against this is the enormous value, not only to intelligence but to application in a wide range of military uses of extrasensory perception."

Remember all of the above next time you see a pigeon sitting on a rooftop and staring down at you through a pair of beady eyes. It just might be in the secret employ of Vladimir Putin or Kim Jong-un, monitoring your every movement via a miniature camera built into its bionic beak, and/or getting ready to wipe you out via laser-weapons cunningly disguised as wings. But probably not.