As most people with an interest in the subject of UFOs will be aware, pretty much since the term "Flying Saucer" was coined in the summer of 1947 rumors have circulated to the effect that some UFOs are secret, military hardware. We're talking about man-made UFOs. Of course, those who roll their eyes at such possibilities very often bring up the matter of the decidedly ill-fated "Avrocar." It was a saucer-shaped vehicle that promised a great deal but ultimately turned out to be a disaster. It's intriguing to note, however, that in the 1950s - when UFOs were at their height, so to speak - a great deal of enthusiasm for saucer-shaped craft was exhibited by the U.S. military.

A perfect example of this enthusiasm can be found in the pages of the Air Intelligence Digest, Volume 7, Issue 12, dated December 1954. It states, under the "Editor's Notes" section: "We have not joined the ranks of publications that print speculative stories of strange flying contraptions, nor have we had any polka-dotted strangers from outer space visiting our office. This is for real. A new aircraft configuration with a circular platform is taking shape on the drawing boards of Western aircraft designers that may well be the beginning of a new era of flight."

We are then told: "New type of jet aircraft, powered by a turbine larger than any now in use, is expected to take off, land vertically, and be able to hover. It may cruise at 1,500 knots and have a range of 15,000 nautical miles. Aircraft designers may be approaching the era of the Earth-built flying saucer. Latest information indicates that a turbine-powered, circular-shaped jet aircraft - literally a flying turbojet engine - will be in existence in the West just 5 years from now. No such aircraft have yet flown, but an experimental project is actively under way in the Western Hemisphere. Such a machine may turn out to be a formidable weapon capable of traveling so fast and so high that it will be virtually immune from attack by present-day defense systems."

That's all very impressive, as is the following from the Digest: "If the developments now under way culminate in successful flight - and the chances are considered good that they will - the disc-shaped aircraft is expected to be able to take off and land vertically, to be able to hover, and to travel at speeds and altitudes than those possible to attain now with conventional wing-and-fuselage jet aircraft. In addition, the range of a disc-type bomber may be greater than that of present-day bombers." 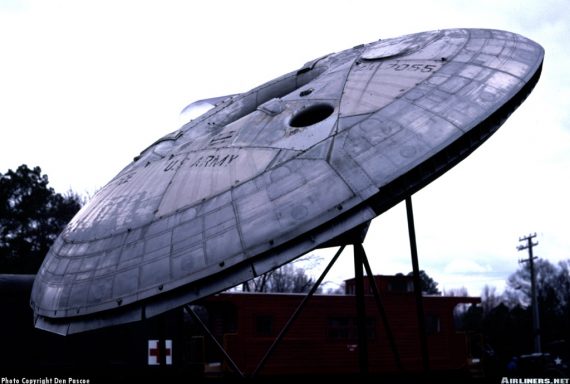 As for how the manned aircraft would be piloted, the Air Force had a few ideas: "The pilot probably will be housed in a compartment mounted in the top center part of the disc. Such a compartment will probably be provided with a full complement of flight instruments, some of which may be specially designed to meet the requirements of unusual flight characteristics. In the main, he will control it by simply by changing the thrust distribution. At various places on the rim of the aircraft, variable exhaust orifices may be opened or closed to change the direction and/or location of the thrust resultant. When necessary, the pilot may vary the amount of thrust as he changes direction and thereby avoid a too-severe G load."

A great deal of forward-thinking was clearly afoot. That much is abundantly obvious from the next section of the document at issue: "A successful development of a saucer aircraft would compel military planners in both hemispheres to take a new look at the design or planned procurement of many items of military equipment such as radars, guided missiles, aircraft armament, antiaircraft artillery, aircraft carriers, helicopters, blimps, and airfields. Further, if the expected potential of the disc type design becomes a reality, it will represent an historic break-through to a level of engineering and flight progress that has been predicted for centuries, and it will revolutionize aircraft design and air warfare. The full impact of the effect that a disc aircraft might have on the planning and conduct of defensive and offensive military operations is apparent when we consider some of the operations characteristics that appear to be within the capabilities of this proposed new configuration."

In part-2 of this article, we'll see what concerns the Air Force had about theoretical Soviet-built flying saucers.

Mysterious Potholes on Pluto and Pyramids on its Moon