Part-1 of this article began as follows: "As most people with an interest in the subject of UFOs will be aware, pretty much since the term 'Flying Saucer' was coined in the summer of 1947 rumors have circulated to the effect that some UFOs are secret, military hardware. We're talking about man-made UFOs. Of course, those who roll their eyes at such possibilities very often bring up the matter of the decidedly ill-fated 'Avrocar.' It was a saucer-shaped vehicle that promised a great deal but ultimately turned out to be a disaster. It's intriguing to note, however, that in the 1950s - when UFOs were at their height, so to speak - a great deal of enthusiasm for saucer-shaped craft was exhibited by the U.S. military."

Part-1 continued: "A perfect example of this enthusiasm can be found in the pages of the Air Intelligence Digest, Volume 7, Issue 12, dated December 1954. It states, under the 'Editor's Notes' section: "We have not joined the ranks of publications that print speculative stories of strange flying contraptions, nor have we had any polka-dotted strangers from outer space visiting our office. This is for real. A new aircraft configuration with a circular planform is taking shape on the drawing boards of Western aircraft designers that may well be the beginning of a new era of flight." 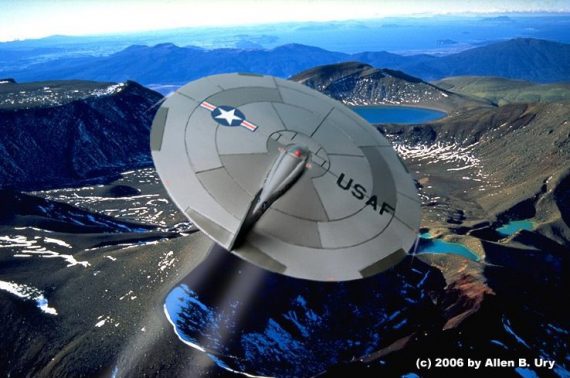 Of particular concern to the U.S. Air Force - the Air Intelligence Digest publication notes - was the extent to which the Russians might have been working on circular-shaped aircraft in the 1950s. The Air Force noted: "One of the big questions now facing the United States is this: What are the Soviets doing in the disc-aircraft field? If the United States accepts the possibility of success of circular-shaped aircraft, then it must also conclude that the Soviet Union is capable of developing such aircraft. If readers assume, at the extreme end of the possibility scale, that the USSR is several years ahead right now, these questions must occur to them."

The questions at issue were as follows: "If the Soviets now have such an aircraft in operational use, would the United States air defense system be able to detect, identify, intercept and destroy a bomber or reconnaissance aircraft moving at a 1,500 knot clip at an altitude of 65,000 feet? What would be the capability of the Strategic Air command with present-day aircraft to penetrate the Soviet Union on bombing missions if the Soviets defended themselves with disc-type interceptor aircraft with the above performance?"

Still on the matter of military strategy and man-made UFOs, there is this from the Air Force: "It is worth repeating that the disc aircraft is a vertical riser. (Some day it may be known simply as a VTO, or vertical take-off aircraft.) This means that it could be housed aboard most naval ships, including submarines. Obviously, a disc aircraft and a sub would make a deadly combination in an offensive operation. It is estimated that in the space of 30 minutes, a disc could take off from its nesting place on the deck of a sub, climb to 65,000 feet or higher, make a run on a target area 200 to 300 miles inland, drop its bomb load, and zip back home to the sub."

And as the Air Force also stressed: "Such an aircraft would need no long, heavily reinforced concrete runways. At the most, it would only need a concrete platform to keep ground personnel and installations from being hit with dust, sand, or gravel. In many instances, a small clearing could provide the disc with a take-off spot. Conclusion: Heads Up!"

Finally, there was this from the Air Force: "A great amount of information on the development, flight, and production of circular-type aircraft will be reported and discussed during the next few years. It will behoove the USAF to continue its open-minded interest in all such reports, keeping in mind that reports of saucer-shaped aircraft have an increasingly better chance of being true as the years go by. A new era of flight appears about to begin."

Of course, as we know from the Avrocar affair, the project to build a man-made saucer barely got off the ground - as in literally. Or did it? No, the Avrocar did not work. But, given the Air Force's undoubted enthusiasm for home-grown saucers in the 1950s, maybe something else did get off the ground. Ours or theirs? Perhaps both.