On November 5, 1885, the Wallowa Chieftain newspaper ran an article on its resident monster, which has been given the distinctly non-monstrous name of “Wally.” It is said to dwell in Wallowa Lake, Oregon, which is an approximately fifty-one square-mile body of water with a depth of around 300 feet. The article states: “A prospector, who refuses to give his name to the public, was coming down from the south end of the lake on last Friday evening in a skiff shortly after dusk, when about midway of the lake he saw an animal about fifty yards to the right of the boat, rear its head and neck up out of the water ten or twelve feet, but on setting him it immediately dived."

The story continues: "He ceased rowing and gazed around in astonishment, for the strange apparition which he had just seen, when it raised about the same distance to the left, this lime giving a low bellow something like that of a cow. It also brought its body to the surface, which the prospector avers was one hundred feet in length. The monster glided along in sight for several hundred yards. It was too dark to see the animal distinctly, but it seemed to have a large, flat head, something like that of a hippopotamus, and its neck, which was about ten feet in length, was as large around as a man’s body."

And, finally, we have this from the Wallowa Chieftain: “Now this story may have been coined in the imagination of the narrator, but he was very earnest in his recital. However, it is a known fact that there is a tradition among the Indians that the lake has a big sea cow in it, which on one occasion, many years ago, came up one evening and swallowed a young warrior and his dusky bride as they were gliding over the surface of the lake in a canoe. And to this day an Indian of the tribes who formerly frequented its shores cannot be induced to go upon its waters. The lake has been sounded to the depth of 270 feet, and it is a bare probability that some monster does inhabit its unexplored depths.”

Consider the following, too. 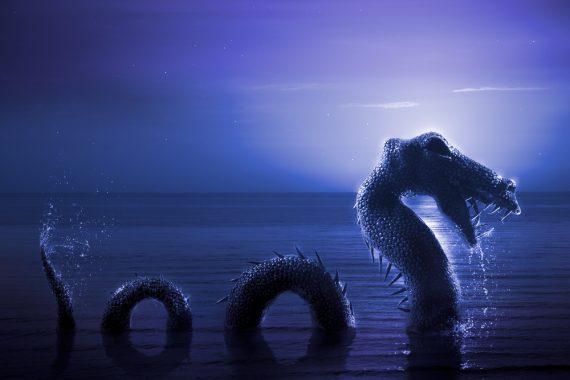 Tabitca Cope states: "Wally is described as being a long, serpent like creature, with multiple humps which show above the water line. Some compare it to a Chinese dragon and say it has horns on its head." She continues: "Sightings and stories can be can be traced as far back to the native population of the Nez Perce Indians." Tabitca adds: "A more recent sighting was by a woman, Irene Wiggins, who has owned the lodge at Wallowa Lake since 1945. She claims she saw the creature several times over the years."

Moving on, in 1978, a couple by the name of Bryant saw Wally on not just one occasion but two. On the first occasion, they saw three hump-like protrusions break the surface of the lake, albeit briefly. Some months later, the pair watched an approximately twenty-foot-long, snake-like animal circle a certain portion of the lake for several minutes. Three years later, Bert Repplinger and Joe Babic were amazed by the brief sight of a three-foot-long head and neck that broke the surface of Lake Wallowa.

While the number of sightings of Wally is scarcely anywhere near the likes of some of its far more famous cousins - such as Ogopogo (of Okanagan Lake, British Columbia), Champ (of Lake Champlain), and Loch Ness's Nessie - the fact that occasional reports continue to surface is a fairly good indication that the lake is home to something unusual. Exactly what it may be, however, remains unknown. Methinks it's time for someone to do a bit of monster-seeking.