The Haunted Beach of India

Ghosts and the paranormal are probably the last thing on anyone's mind when they are at the beach. We go to the beach for the fun, the scenery, the sand, and the feeling of the sea breeze and the sun on our skin. We go here to get away from the darkness, and beaches are likely the last places anyone thinks of as the haunts of specters and phantoms. Yet it seems that even here with the ocean views and the frolicking beachcombers we are not safe from tales of the mysterious and strange, for even these places can apparently become instilled with the supernatural and the weird. One beach in India has long been ground zero for a wide variety of ghostly phenomena, high strangeness, and odd happenings. It is a place heavily saturated with the bizarre, and which shows that even in a sun flecked beach paradise, the reaching claws of the supernatural cannot always be escaped.

Located along the Arabian Sea, 21 kilometers southwest of the city of Surat, in the Indian state of Gujarat, is Dumas Beach, which is named for the nearby village of Dumas. With its distinctive black sand and quaint and charming views of the Arabian Sea as well as its numerous health resorts, affordable accommodations, its promenade full of snack stands, shops and restaurants, and other adjacent sites of interest such as the Dariya Ganesha temple, Dumas Beach has over the years become one of the top destinations for tourists in Gujarat among both locals and international visitors. Here you will find people of all nationalities playing in the water or sitting along the black sand beach soaking in the sun and enjoying the cool breezes from the sea. Yet for all of this tourism and fun in the sun, Dumas Beach also has a dark, morbid history.

Several decades ago, the area was used as a cremation ground for the bodies of the dead, and it would not have been uncommon to have seen the swirls of smoke wafting up above the beach from the burning corpses in those days. Cremation is a typical method of burial for India's majority Hindu population, as it is believed that reducing the body to ashes more smoothly expedites the release of the soul from its earthly tethers and is thought to be the most spiritually beneficial way to treat the dead. At Dumas Beach, the dead would be cremated and the resulting ash scattered into the sea, which considering Hindu tradition is a perfectly normal thing, but has lent the area a rather ominous reputation as a place where some particularly tormented souls of the cremated or those who refuse to leave behind their earthly trappings have opted to remain to haunt the seaside or even torment those who would come here. Additionally there have long been stories of people drowning at Dumas Beach under mysterious circumstances or even completely disappearing altogether. It is this history as a cremation ground and a place of strange deaths and disappearances, as well as its at times rather menacing appearance with its black sand, rather muddy water, and abundance of skeletal looking thorny wild shrubs, that have made Dumas Beach into a spooky location infused with the paranormal that routinely pops up on lists of the most haunted places in India.

While the daylight hours appear to be the domain of vacationers and free of creepy incidents, there are numerous purported strange phenomena said to plague Dumas Beach as soon as darkness falls, when the ghostly activity is said to become active. One of the most commonly reported occurrences is the presence of disembodied voices on the wind that are known to whisper to visitors all manner of things, from begging for help, to calling peoples’ names, to issuing urgent warnings to stay away from the water, to go no further, or to turn back. At times the voices say nothing and are said to merely giggle, murmur, moan, or even howl or scream. There is also a profound sense of sadness, despondence and desolation that is said to hang over the beach, affecting the mood of visitors, and when this thick palpable feeling of forlornness is at its strongest it is believed that the wind will pick up to relentlessly fierce gales. At other times, the cool night air of the beach allegedly takes on a sort of electrically charged quality and a smell almost like ozone can be detected lacing the atmosphere here. This may have something to do with why cameras and other electrical equipment have a habit of malfunctioning at the beach. Other odd smells are also reported from Dumas Beach, with a malevolent and inexplicable smell of rotting decay from some unknown source occasionally filling the air and overcoming visitors to the point that the stench becomes unbearable.

Of course any supposedly haunted location is going to have ghost sightings, and Dumas Beach has plenty of those as well. Shadowy figures are said to walk along the edge of the water at night, sometimes disappearing into the waves and sometimes merely suddenly vanishing altogether. Most often these dark, spectral entities are described as humanoid, but a few reports speak of phantom black hounds that lope along the sand and even chase people from time to time. There are also shiny orbs seen flitting about over the beach, which are either seen directly or show up in photographs later. The water itself is said to be prowled by a horrific white apparition that rises from the sea to try and lure visitors to a watery grave, and indeed many of the drownings and mysterious disappearances that have occurred on the beach have been blamed on ghosts. Even the color of the black sand itself has been attributed to the supernatural forces converging here, although black sand is in fact not particularly uncommon and is typically the result of volcanic soil.

Perhaps one of the oddest and most persistent phenomena reported from Dumas Beach is the effect that the area allegedly has on dogs. By all accounts they seem to absolutely despise the place. Dogs that live in the vicinity are said to howl and bark all night long in unison for no apparent reason and those who have tried to walk their dogs on the beach have reported all sorts of strange behavior. It is said that dogs that are brought onto the beach will often stop dead in their tracks and refuse to continue any further, or start inexplicably barking or growling viciously, as if at something or someone that isn’t there. Dogs have been said to display other strange behavior in the vicinity of the beach as well, such as mindlessly spinning in circles, cowering in fear for no reason, sudden bouts of uncharacteristic aggressiveness, incessantly darting back and forth, or appearing to chase something that only they can see. Interestingly, all of this only happens at night or in the twilight hours, and dogs at the beach supposedly behave normally during the daytime. Some have claimed that this strange behavior, aggression, and fear shown by dogs at the beach is due to their sensing something bizarre that humans cannot and see it as evidence that the beach is indeed haunted. 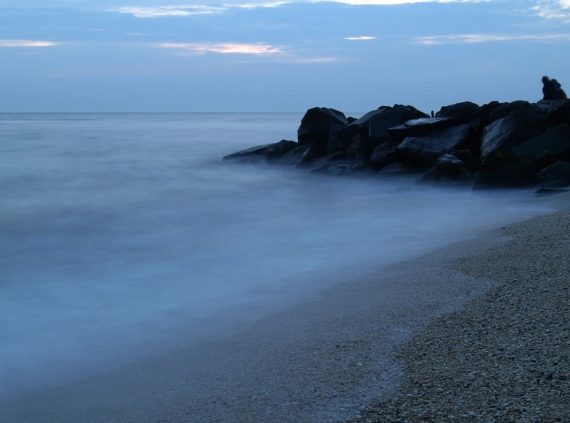 So what is going on at Dumas Beach? Is this place truly haunted or is this all spooky folklore and superstition? To be sure, many of the mysterious elements of the beach could have mundane explanations. Beaches at night can be dangerous places, especially when mixed with alcohol, which could account for the drownings and disappearances, with some of the bodies being dragged out to sea to never be found. People drinking at night on beaches in India is such a problem that some areas, such as Goa, have officially banned alcoholic beverages on beaches after sundown, so it seems that this could be behind at least some of the unfortunate deaths rather than evil supernatural forces. The area’s creepy history as a site for cremation and the local lore that restless spirits stay behind could also make people exaggerate perfectly normal sounds of the wind or perhaps see things that aren’t there, yet not all of the weirdness reported from here seems so easily written off. Perhaps the phenomena are a complicated mix of the mundane, folklore, superstition, and the unexplained.

Is this all explainable or is there something more? Are there indeed forces beyond our understanding at work at Dumas Beach in some capacity? Dumas Beach remains a popular tourist spot despite its mysterious and sinister reputation, and actually seems like a fun place to visit with lots of attractions, although it seems that locals are quick to warn visitors not to go onto the beach at night. Even so, there is no particular law against it, so any one with the courage to try can freely try to take a beach side stroll under the moonlight. It might be best to leave your dog at home though.