The Mountain of Blue Fire

Nature has a way of continually surprising us and inspiring awe within us, and it seems there are just as many fantastical wonders to be found in the natural world as there are in that of the supernatural. Here among nature's great mysteries and incredible spectacles are all manner of spectacular displays of power, destruction, and beauty, often all of these combined. One of the weirdest, and yet at the same time most undeniably gorgeous and breathtaking is to be found at a volcano in Indonesia, which is the source of one of the most amazing natural light shows on earth. It is a place where the raw power of nature, its fury, and its most magnificent beauty come together to weave into a spellbinding display that is hard to really put into words.

Lying within the Banyuwangi Regency of East Java, Indonesia, and nestled within a 20 km wide caldera known as the Ijen caldera, is a group of active stratovolcanoes known as the Ijen volcano complex, which reaches its highest point with the 2799 m high Gunung Merapi stratovolcano. Although the caldera itself is home to numerous picturesque coffee plantations, waterfalls, and quaint hot springs, the areas of the volcano complex resemble the face of another distant planet with its jagged rocky landscape, craggy cones, craters, ridges, and sulphur spewing vents littering its desolate facade. To the west of the larger Gunung Merapi stratovolcano, the name of which translates to the ominous sounding "mountain of fire," is another volcano called Kawah Ijen, with a crater that has a diameter of 722 meters (2,369 ft), a depth of 200 meters (660 ft.), and a total area of 0.41 square kilometers (0.16 sq. mi).

At first there is not much to particularly differentiate Kawah Ijien from the rest of the rough and rugged surrounding moonscape, but there are several features here that make it stand out. One is a 1 km wide crater lake with striking turquoise water which from a distance may seem quite charming and inviting, but in actuality is the world’s largest highly acidic lake, with sulfuric acid laced water that can dissolve an aluminum can within 30 minutes and which is known to belch forth deadly gases from time to time without warning, causing birds to suddenly fall from the sky or even killing humans who get too close. The lake is always wreathed in a thick smog of dangerous, noxious fumes that mar its otherwise otherworldly beauty.

Kawah Ijien is also notable for its incredible amount of sulfur, with which the atmosphere is so thickly laden that it causes irritation and inflammation of the eyes for those who come here and in most cases necessitates wearing a gas mask. These vast sulfur reserves are the target of a huge mining operation in the bottom of the crater. The mining is highly dangerous, perilous work, with miners braving temperatures surpassing 100 degrees Fahrenheit, noxious gagging fumes, unstable rocky footing, potential eruptions from the active volcano slumbering below their feet, lethal volcanic gases which can bubble up at any moment from the bowels of the earth, and very few safety measures in place due to the largely freelance nature of the work. The men don’t even wear gas masks as they toil away choking on hazardous fumes next to smoking, active volcanic vents.

It is also back breaking, intensive physical labor. Miners use pipes to drain out deep red liquid molten sulfur and then allow it to cool into chunks of yellow, solid sulfur, after which they laboriously break the chunks down by hand into smaller pieces and load up baskets with up to 90 kg. (200 lbs) of the stuff. The heavy baskets are then carried by hand up to the top of the crater through a gas choked narrow trail and a grueling 3 km hike (1.86 miles) to a sugar refinery in Paltuding Valley, where the sulfur is weighed and the miners paid according to how much they have brought, with a miner normally making around a meager $13 a day. The sulfur will typically end up being used for vulcanizing rubber and bleaching sugar. A typical miner, many of which are mere children, will make 2 of these harrowing trips a day, and this exhausting, unforgiving labor, along with the highly dangerous conditions, nonexistent safety measures, and the constant unprotected inhalation of toxic gases and fumes, give the typical sulfur miner here a life expectancy of not much more than 30 years of age. 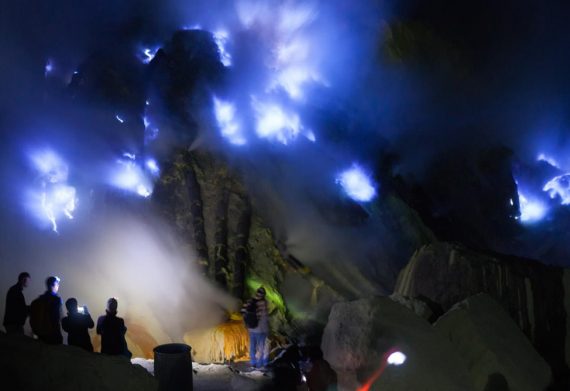 As deadly and dangerous as all of this sulfur is, it is this sulfur which is responsible for one of the most surreal and spellbinding natural spectacles in the world. As this huge amount of sulfur comes forth from the earth and reaches the surface, at high pressures and temperatures of more than 600°C (1,112 degrees Fahrenheit), it hits the lava and oxygen in the air and is ignited. This causes it to spectacularly blaze to life in stunning blue flames that can be up to 5 meters (16 feet) high and which cast the mountainside in an otherworldly blue glow. This already astounding natural light show is made even more dreamlike when portions of the sulfur condense to liquid and continue to burn as it flows along, creating rivers of blue flame that meander down the mountain in a breathtaking display of nature’s power and beauty. The flames are always present here, but the blue violet fire is only visible at night, when it appears most nights of the year. Although such burning sulfur can be seen to a limited extent in other places around the world, such as Yellowstone National Park, nowhere else is it as incredibly dramatic or on as grand a scale as it is at Kawah Ijien, and this is by far the largest such display in the world. 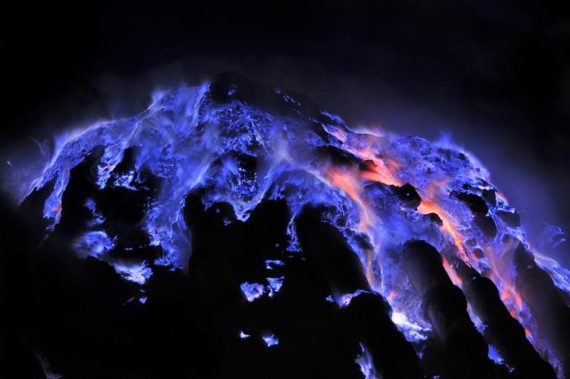 Although the phenomenon has been well known in the area for a long time, with the miners long even working at night by the light of these incandescent flowing flames, it has mostly been brought to the attention of the outside world due to the stunning photographs of the display taken by French photographer Olivier Grunewald. Grunewald first heard of Kawah Ijien’s awe inspiring fiery blue rivers through a photo he saw taken by the president of Geneva's Society for Volcanology, Régis Etienne, in 2008, which shows the silhouette of a child miner illuminated by the ghostly glow of the blue flames. The haunting image stayed with him, and Grunewald became fascinated, almost obsessed, with documenting the miners working among the flows of blue fire spilling down the mountain. He would later join forces with Etienne to brave the harsh conditions of the crater and shoot a documentary on the phenomena and the plight of the miners over the course of 6 trips and 30 nights. The documentary was shot under grueling, inhospitable conditions, during which several cameras were corroded by acid and the team was constantly plagued by the harmful fumes despite wearing gas masks, and even after shooting was completed it took three weeks to get rid of the thick smell of sulfur clinging to them. Grunewald told National Geographic magazine:

The main problem was the acidic gases that whirled constantly in the crater. The night seriously increased the difficulty as well, because it became almost impossible to see when dense gases arrived—at times, we were stuck in gas plumes for over an hour without being able to see our hands. 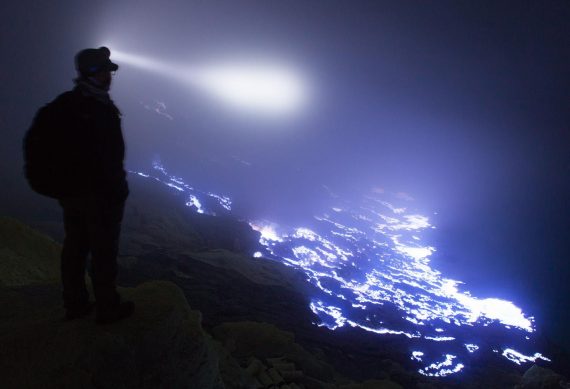 The results speak for themselves. During the course of making the documentary, Grunewald was able to catch by far the most striking, surreal, and beautiful images ever taken of this bizarre phenomenon, as well as to illustrate the hash life of the sulfur miners who live and die among the enchanting flames. If a picture is worth a thousand words, then this magnificent and mesmerizing  gallery of pictures speaks volumes. It is hard not to be enthralled by this display of nature’s audacious fiery splendor. Making the photographs even more impressive is that they were not touched up or altered in any way, and Grunewald did not use lens filters when shooting any of this. It is no wonder that when the pictures were released they gained immediate acclaim and enchanted practically everyone who saw them, as well as causing tourist numbers to Kawah Ijien to skyrocket. 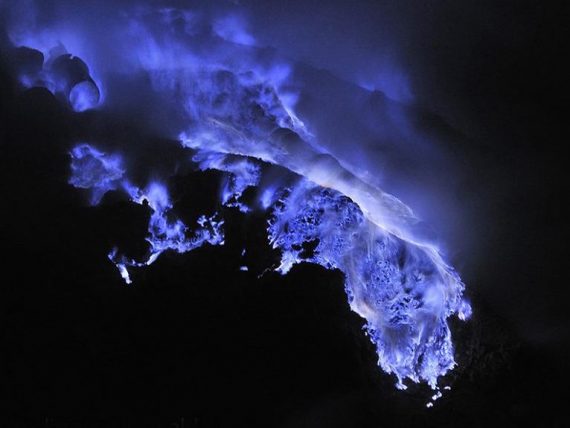 These streams of blazing molten sulfur are certainly enough to make one want to see them with their own eyes, but before packing your bags there are some things to seriously keep in mind. Although Kawah Ijien has not fully erupted since 1817, when its volcanic fury displaced the crater lake and inundated several villages, it is nevertheless an active volcano and over the ensuing years has experienced many phreatic eruptions, which are explosions of steam, water, ash, and rock fragments caused when magma heats ground or surface water. The crater is also heavily pervaded by numerous toxic, deadly gases including sulfuric dioxide which, depending on the wind conditions and concentrations, can cause anything from eye irritation, to sore throats, respiratory problems, dizziness, feinting, or even death. The crater lake itself has been known to suddenly release large clouds of lethal gases, and it is not uncommon to see birds drop dead in mid-flight over its alluring turquoise surface. It is highly recommended that visitors where a gas mask and check conditions beforehand when visiting Kawah Ijien, just to make sure that it is fully safe to approach. If none of this intimidates you and you still have the resolve to go, then you can expect a 2 hour hike to the rim of the crater and an additional 45 minute climb down into the crater proper over difficult terrain permeated by sulfuric smoke and gases. However, by all accounts from people who have made the journey here all of the risk and hardship is absolutely worth it to see the once in a lifetime spectacle of nature’s greatest light show.

The Fly That Wants to Be a Bee