UFOs Seen at Air Shows and Flying with Military Aircraft

If you want to see the latest in military aircraft or what could be coming in a few years, the place to go to is an air show. If you want to check out their performance, you fly with them. That seems to be what UFOs have been doing lately as unidentified objects – including a possible flying humanoid - have been spotted at a number of air shows around the world and also flying along with military jets and helicopters.

This sighting took place on October 3rd in Big Spring, Texas (in west central Texas). The witness recorded Black Hawk helicopters flying over his house (hmm – wonder what that was about) and later hit the slow motion button while watching the video and saw a UFO flying past them at speeds too fast to be seen during normal viewing. He added credibility to the sighting by pointing out he’s a retired police officer. 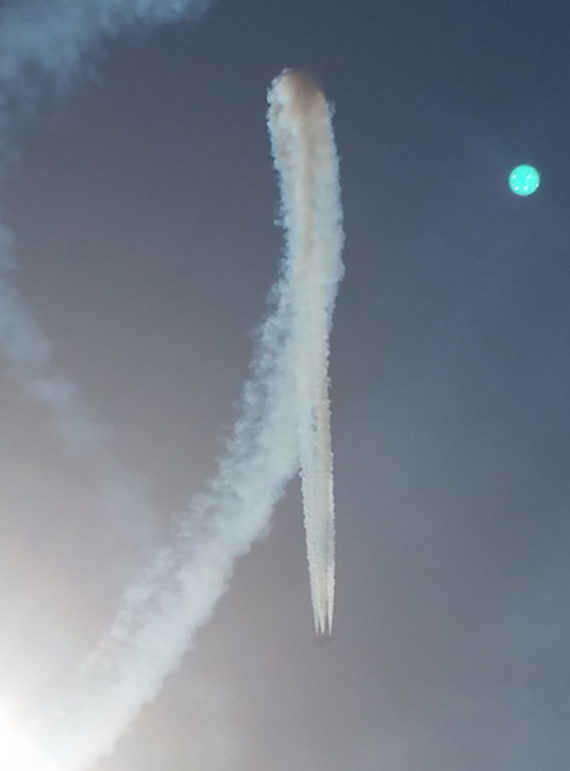 This photograph of an unusual UFO was taken at the Miramar Air Show in San Diego, California, on October 3rd, 2015. The nearby jets were from the French jet team. The witness (and seemingly everyone else at the show and the pilots) didn’t see the UFO during the performance but spotted it later while viewing the video.

This Russian video of what looks like a flying humanoid observing a military jet is claimed to have been taken at an air show in Texas. The most recent big air show in the state was the Fort Worth Alliance Air Show in September. No other information was given about the sighting.

Earlier this year, on January 13th, a UFO was spotted flying past a Russian Su-35 fighter jet (ironically nicknamed the “UFO” because of its maneuverability at high speeds) at the Paris Air Show, considered to be the biggest and best. The cigar-shaped UFO appeared to move from one side of the jet to the other at a speed far greater than the Russian “UFO.”

UFOs at air shows are not just a 2015 thing. In July 2013, this video was taken at an unnamed air show by an anonymous witness. Like the others, it shows a cigar-shaped UFO flying past the jets at a speed that seems to far exceed them.

Can lens anomalies explain all of these sightings or are UFOs carefully observing Earth’s best current and future military aircraft? If so, shouldn't the world's air forces be concerned? Shouldn't we?

Peruvian Girl Gets Possessed While Using Ouija Board App