Strange, unexplained deaths of animals in large numbers are always a cause for alarm. But what does it mean when entire flocks of birds commit mass suicide by drowning in ponds and birdbaths? That’s what appears to be happening in England and experts are struggling to find a reason why.

The birds are starlings (Sturnus vulgaris), which were once widespread across the UK (as well as much of the world) but have been disappearing at alarming rates in recent years due to loss of nesting areas and food sources. According to a new study by the Zoological Society of London and published in the journal Scientific Reports, the starling population in the UK dropped from 45 million in 1980s to 3.4 million, making them a red-listed or threatened species. Is this depressing loss of fellow feathered friends causing the starlings to commit suicide?

That’s as good of a guess as any. The study found 12 cases between 1993 and 2013 where flocks of starlings numbering from 2 to 80 were found dead by drowning. Drowning is an extremely rare way for birds to die so to find this many in multiple cases is definitely disturbing. Autopsies showed no signs of diseases or wounds from attacks. All signs indicate the deaths were self-inflicted.

So why are the starlings committing suicide in groups? One theory is overcrowding while drinking or bathing. Even with their numbers down, starlings still travel in large flocks and sometimes cram into small ponds, puddles or birdbaths. Younger birds who are not strong enough or experienced enough to deal with crowds in confined spaces may be getting trapped underwater.

Another possibility is that the birds mistake still water reflecting dark surroundings as solid ground and end up drowning when shocked on landing attempts. Being social birds, the groups of dead starlings suggests that many of them simply followed the crowd … to their deaths.

None of these possible explanations for the starling suicides by drowning have convinced experts, so they’re asking anyone who find drowned starlings to report them to the Zoological Society on the Garden Wildlife Health web site.

As always, mass deaths of animals is a reason to be concerned, especially if it’s human-caused or if whatever is responsible for deaths - self-inflicted or otherwise - has the potential to move up the food chain … to the top. 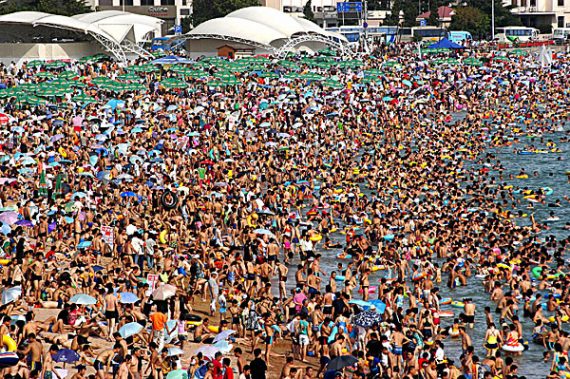