To be honest, cryptozoology has always taken a backseat when it comes to my interest in the Fortean. As someone who lives within the safe and comfortable confines of civilization, thoughts of sea monsters, giant birds, chupacabras, dog men, sasquatches, and other strange creatures rarely pop into my mind. True, I might get abducted by aliens in the middle of the night by means of a tractor beam through the window, though I honestly doubt they’d want me—for some reason they much prefer backwoods Americans. Jokes aside, I enjoy quality books on Fortean topics, and I thought that American Monsters would help to broaden my knowledge of all things cryptozoological.

It turns out I was correct. Written by Linda S. Godfrey, a respected authority on mystery creatures and the author of more than a dozen such books, including Real Wolfmen and The Michigan Dogman, American Monsters lives up to its title, covering just about every variety of “monster” ever sighted in America from the past up to the present day. The book begins by looking at such feathered creatures as thunderbirds; followed by those of an aquatic variety like the Florida gator man and sea serpents; then ends by focusing on wolfmen, Bigfoot, and other land-based creatures. Would you believe that even “bat men,” “flying manta rays,” and “frog men” are given mention? Until reading this book, I had no idea such beings existed within the realm of cryptozoology. Yet they do. The field really has no limits. 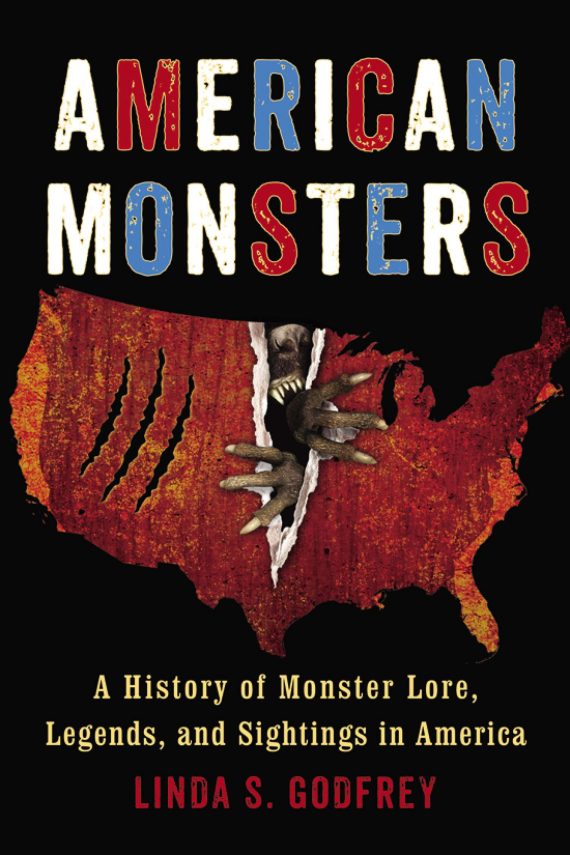 By “monsters,” Godfrey means creatures that defy conventional explanation. In other words, beings that ought not to exist, yet which are sighted again and again. Bigfoot is a classic example. Although the vast majority of such sightings can probably be attributed to the misidentification of bears and other animals, there remains a small number of sightings that cannot be so readily explained. Amazingly, it’s not uncommon for witnesses to claim that they engaged with the creature on a telepathic level, or that the creature, when shot at, didn’t so much as bleed. Of course, we’re getting into paranormal territory here. Forget hard physical evidence and conclusive answers. Referring to monsters in general, Godfrey writes:

"[T]hey…thwart our every attempt to capture them bodily or on film or video. They leave footprints that cannot be proven to match any known animal, and the few hairs or stool samples that they grudgingly offer for DNA or morphological analysis always seem to be contaminated or inconclusive. They are masters of confusion and the very embodiment of the ancient, traditional trickster entities found in so many cultures."

Godfrey’s expert knowledge of the subject matter definitely shines through in this entertaining and well-written book. Not one to shy away from field work, some of the cases described are ones she’s investigated first-hand. She even mentions a couple of sightings of her own, including an apparent Bigfoot encounter in southern Wisconsin’s Kettle Moraine region in 2012. However, rather than try to convince the reader that monsters exist, her approach is that of an investigative journalist driven by inquisitiveness and passion. Highly recommended.

Louis Proud who lives in Melbourne, Australia, is a writer and researcher specializing in paranormal and occult phenomena. His work has been published in Fate, Mysteries, New Dawn, Nexus and Paranormal magazines. His interests include film, radio-controlled models and anything to do with the mysterious and unexplained. His recently published book, Dark Intrusions: An Investigation into the Paranormal Nature of Sleep Paralysis Experiences, is available from Amazon in the USA and the UK. Louis Proud can be contacted at [email protected]l.com. Visit his blog: http://louisproud.wordpress.com