Minnesota is, in a word, beautiful. From its vast cornfields that sprawl over the rolling hills in the southern part of the state, to the lush forests of the north, every inch of Minnesota looks like a greeting card. Then there are the lakes, 11,842 of them, making the state a hunting and fishing paradise. The name Minnesota is a Dakota Indian word that means “clear blue water.” Famous residents include authors F. Scott Fitzgerald, and Sinclair Lewis, actress and singer Judy Garland, 'Peanuts' creator Charles Shulz, singer/songwriters Prince and Bob Dylan, former professional wrestler, actor and Minnesota governor Jesse “The Body” Ventura, and actor Seann William Scott? Wait. Who stuck that in here? With 60 per cent of the residents of Minnesota living in and around Minneapolis-Saint Paul region, that leaves a lot of the state sparsely populated, and a haven for monsters. 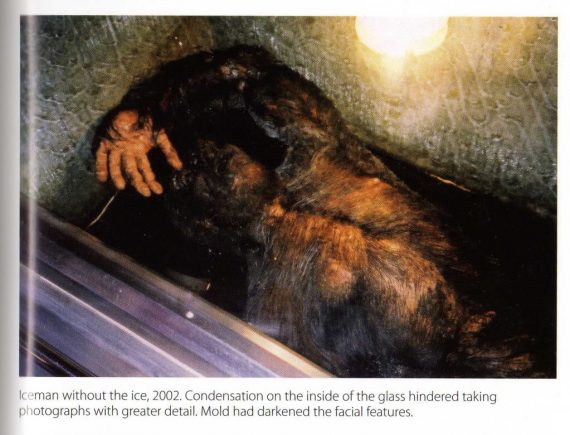 Although whether the Minnesota Iceman was real or a hoax is still debated, the fact is something frozen and apelike existed, and was carted around as a sideshow attraction throughout North America through the 1960s and 1970s.

Carnival show promoter Frank Hansen, claimed this six-feet-tall, human-like creature, was found in Siberia. The thing had an ape-like face, a broken arm, and a bullet hole in the back of its heads. Famed cryptozoologists Ivan T. Sanderson, and Bernard Heuvelmans, examined the Iceman at Hansen’s home in Minnesota. They were convinced it was a genuine biological specimen, complete with a rotting odour in spots where the ice had melted. An article on the Iceman appeared in a European scientific journal labelling it a new species of Neanderthal, which prompted Hansen to tout it in traveling fairs as the missing link, charging looky-loos 25-cents to gaze upon the creature.

Then things get fuzzy. Hansen claimed he’d hidden away the original Iceman because it was becoming damaged with all the travel, and began using for the show a model of the Iceman covered in latex and hair. Soon after, the Smithsonian Institution declared the Minnesota Iceman a hoax.

You can see the latex one yourself, if you’d like. The Minnesota Iceman is on display in the Museum of the Weird in Austin, Texas.

In 2011, Lacey Ilse stopped her vehicle near Alexandria, Minnesota (population: small), because of an unidentifiable lump on the shoulder of the road. Ilse told The Minneapolis Star Tribune the thing was “ghostly white and hairless, its neck bloated out of proportion with the rest of its limp body.” She also told the newspaper it looked “half human.”

Locals thought the Mystery Monster might be a hairless badger, dog, raccoon, or a wolf. Others thought it was a bizarre government experiment escaped from a lab, or was the legendary chupacabra. Eventually, the Minnesota Department of Natural Resources (notorious party poopers) said the dead beast was probably a decaying badger.

But there is some hope the Mystery Monster was just that, a mystery monster. “Probably” is not “certainty.”

Lake Pepin, part of the Mississippi River system, sits about sixty miles downstream of Minneapolis-Saint Paul, and has a surface area of forty square miles. Although the lake is only twenty-one feet deep, some think that’s deep enough to be home to a monster.

Local man Larry Nielson, who operates the paddlewheel boat Pearl of the Lake, saw something on Lake Pepin eleven years ago, according to The Star-Tribune. Nielson saw a wake that was about 200 feet long, and two feet high going upstream. He couldn’t explain it.

Pepie has its roots in history. According to newspaper accounts, in the 1600s a Frenchman, Father Louis Hennepin, claimed to see “a huge serpent as big as a man’s leg and seven or eight feet long” in the area where the lake is now.

Locals have speculated Pepie to be anything from a sturgeon, to an alligator gar, to a surviving plesiosaur.

Whether Pepie exists or not, Lake City, Minnesota, that sits on the shores of Lake Pepin, at least has the title of “The birthplace of water skiing.” The sport was invented there in 1922 by Ralph Samuelson.

Although I covered the Wendigo in “Exploring American Monsters: Maine,” apparently this big fella really gets around. The Wendigo is a creature that was once a man that ate another human. This unforgivable sin transforms a human into a fifteen-foot-tall shaggy monster with long fangs, and glowing yellow eyes. Oh, and it’s hungry, too. Always hungry – for human flesh.

The early white settlers in Minnesota claimed to have seen these wicked, banshees, and considered them an omen of death. Reportedly in the late 1800s to the early 1900s, the town of Rosesu, Minnesota, eleven miles south of the Canadian border, had a number of sightings of a Wendigo; each sighting was followed by a death.

Sightings of this creature in northern Minnesota and Canada are still reported.

Mothman Spotted in Argentina and Ahool Seen in Portugal