In Search of the British Griffin, Pt. 1

One might be forgiven for thinking that sightings of winged monsters of the bizarre kind only ever occur in the skies over large forests, dense jungles, and remote mountains. Not so. In fact, far from it. In 1984, just such a thing was seen soaring over the capital city of the United Kingdom: London. We're talking about nothing less than a griffin. Yes, you did read that right. The specific location was Brentford, a town situated within west London. The day on which all hell broke loose was hardly of the kind one might expect to associate with a monster. There were no dark and stormy skies, no thunder and lightning, and no howling winds. Instead, there was nothing but a warm, pleasant, sunny day in March.

The man who kicked off the firestorm of controversy was Kevin Chippendale, who, at the time, was walking along Brentford’s Braemer Road. As he did so, Chippendale’s attention was drawn to something strange in the sky. It was some sort of large, flying animal. Not the kind of thing you see every day, to be sure - and certainly not over London. And in a decidedly synchronistic fashion, it all went down in the skies above a local pub called The Griffin.

It was the imagery of a legendary griffin of ancient mythology that Chippendale most associated with the thing he briefly encountered. It was winged, tailed, and sported a dog-like muzzle. Chippendale could do nothing but stare in awe.

It's pretty much all thanks to researcher and author Andy Collins that we know of this story. Yes, it certainly made the news around London at the time, but it was Andy's 42-page booklet - The Brentford Griffin: The Truth Behind The Tales - which brought the story to a wider, Fortean audience. A cool, small publication, it tells the full story in all its weird glory, and skilfully captures the atmosphere of that strange period when London's skies were said to have been haunted by a monster. Hoax, reality, mistaken identity, myth come to life in thought-form/Tulpa style, or a combination of several factors? For some the jury remains out, thirty years later.

It's worth noting, however, that griffins have long and rich histories. For example, in the 14th century, Sir John Mandeville wrote of griffins: “Some men say that they have the body upward as an eagle and beneath as a lion; and truly they say sooth that they be of that shape. But one griffin hath the body more great and is more strong than eight lions, of such lions as be on this half, and more great and stronger than an hundred eagles such as we have amongst us."

Mandeville continued: "For one griffin there will bear, flying to his nest, a great horse, if he may find him at the point, or two oxen yoked together as they go at the plough. For he hath his talons so long and so large and great upon his feet, as though they were horns of great oxen or of bugles or of kine, so that men make cups of them to drink of. And of their ribs and of the pens of their wings, men make bows, full strong, to shoot with arrows and quarrels.” 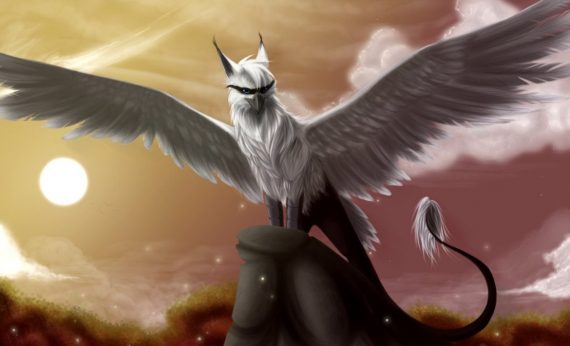 Almost a year later after his extraordinary encounter, specifically in February 1985, Kevin Chippendale saw the creature yet again. Others saw the monster, too. They included a psychologist named John Olsen – who encountered the beast while jogging near the River Thames - and a woman named Angela Keyhoe, a friend of Chippendale who saw the griffin squatting atop the town’s Watermans Arts Center. The media was soon onto the story, and coverage was again afforded the mystery.

Then, just like so many cryptid-based incidents, the weird wave of the winged thing came to a sudden end. It’s worth noting, however, that despite the incredible and unlikely nature of the saga of the Brentford griffin, this is far from being the only occasion upon which a griffin has been encountered in the UK. As we shall see in part-2.

The Mystery of the Nine Unknown Men