Italians Try to Rid Themselves of a Royal Ghost

When there’s something strange in your neighborhood, you’re gonna call a ghostbuster. When the ghost belongs to a former king who was banished for life from your country, you may need a bigger buster. That’s the case in Asti, Italy, where the ghost of King Umberto II is becoming a royal pain in the Asti.

There have been at least four sightings of what most witnesses believe to be the ghost of King Umberto II of Savoy since 2011, either at City Hall or in nearby Piazza San Secondo. The most recent occurred in early November 2015 when an Asti city employee claimed she had a conversation with the king in a City Hall office. That was preceded by a sighting in September by a shopkeeper and another person. Prior to that, the king’s ghost was spotted in 2012 and 2011. All of the witnesses say the king is dressed as a commoner and appears at around 8 p.m.

Born in 1904, Umberto was the only son of King Victor Emmanuel III of Italy and Queen Elena of Montenegro. They were members of the House of Savoy, which reigned over the Savoy regions of France, Italy, and Switzerland since 1003. After World War II and the fall of Mussolini, King Victor Emmanuel abdicated the throne to Umberto in hopes of saving the monarchy. Umberto’s reign lasted just a month when Italians voted to form a republic. Umberto was banished and forbidden by the constitution from ever returning to Italy. He lived in Portugal and died in 1983. 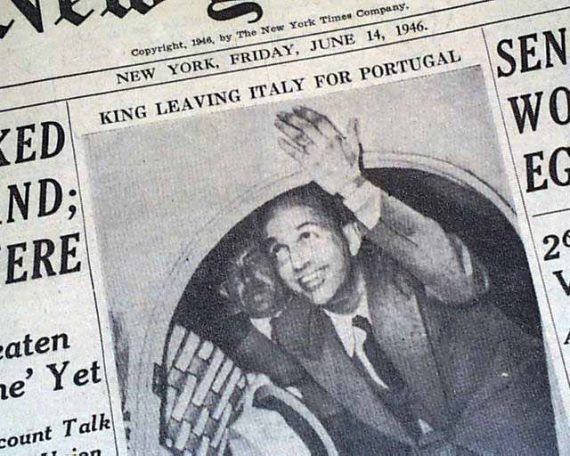 Why has the ghost of King Umberto II returned to Italy and specifically to Asti? Some witnesses report that the apparition asks about a family in Asti he was acquainted with. Ghost hunters from National Ghost Undercover have been brought in and they think it may to do with the upcoming 70th anniversary of the king’s banishment on June 13th, 2016. Maybe they should see if the king left town at 8 pm.

Italians want the ghost of Umberto out because some hatred and fear of the monarchy still remains. Although Umberto fought with the Allies against Mussolini, many blame the royals, particularly his father, for Mussolini’s rise to power in the first place and the disgrace brought to Italy by World War II.

The team from National Ghost Undercover arrived at Asti City Hall on November 25th and, after detecting the presence of the ghost, recommended the installation of surveillance cameras to capture the image of Umberto.

Will they be able to rid City Hall and Italy of the ghost of Umberto II? That remains to be seen.

UFO Appears After UFO Clouds Cause Panic in South Africa