Just in time for Christmas, operational lightsabers and freeze rays are available for that hard-to-shop-for Jedi or super villain in your family. While they won’t match the performance of their movie counterparts, these inventions definitely work and show it’s only a matter of time before we’re all Yoda or Mr. Freeze.

The Proceedings of the National Academy of Sciences reports that researchers from the University of Washington used an infrared laser beam not to heat but to cool water. They shot the infrared beam at a nano-crystal suspended in water until it emitted a special light that gave off more energy than it absorbed.

The hotter light drew heat away from the crystal, cooling the water around it. At the end, the water temperature dropped by 20 degrees C (36 degrees F). While this laser refrigeration technique has been used since 1995 in a vacuum, this is the first time it’s been used to cool water.

Other than freezing Batman, practical applications for this type of laser refrigeration include cooling small areas of a microprocessor or reducing the temperature of part of a single cell. Its size is still on a nano scale but that is expected to change soon.

On the other hand, the new lightsaber is ready to cut through solid steel like butter – really hard butter, but it’s still promising.

Developed by Energetic Materials & Products for the military, the TEC Torch is a flashlight-sized 13-inch-long, one pound cylinder that, when the button is pressed, emits a vaporized metal flame registering at over 4,000 degrees F.

The concentrated jet of metal lasts only a few seconds but that’s enough time for it to cut through thick steel bars, locks and most other things it touches. While designed for military applications, the TEC Torch is now being sold to first responders for rescue operations. In addition, it can work underwater, making it a tool for divers as well.

With only seconds before it flames out, the Tech Torch won’t do well against an actual lightsaber but its metal-cutting power would definitely scare away steel droids.

The refrigerating laser and TEC Torch are proof that, if you wait long enough, cool stuff from the movies will eventually be invented. Come on hoverboards! 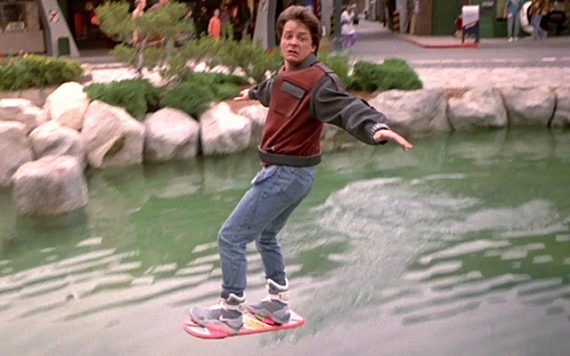 UFOs May Be Monitoring Bombings in Syria